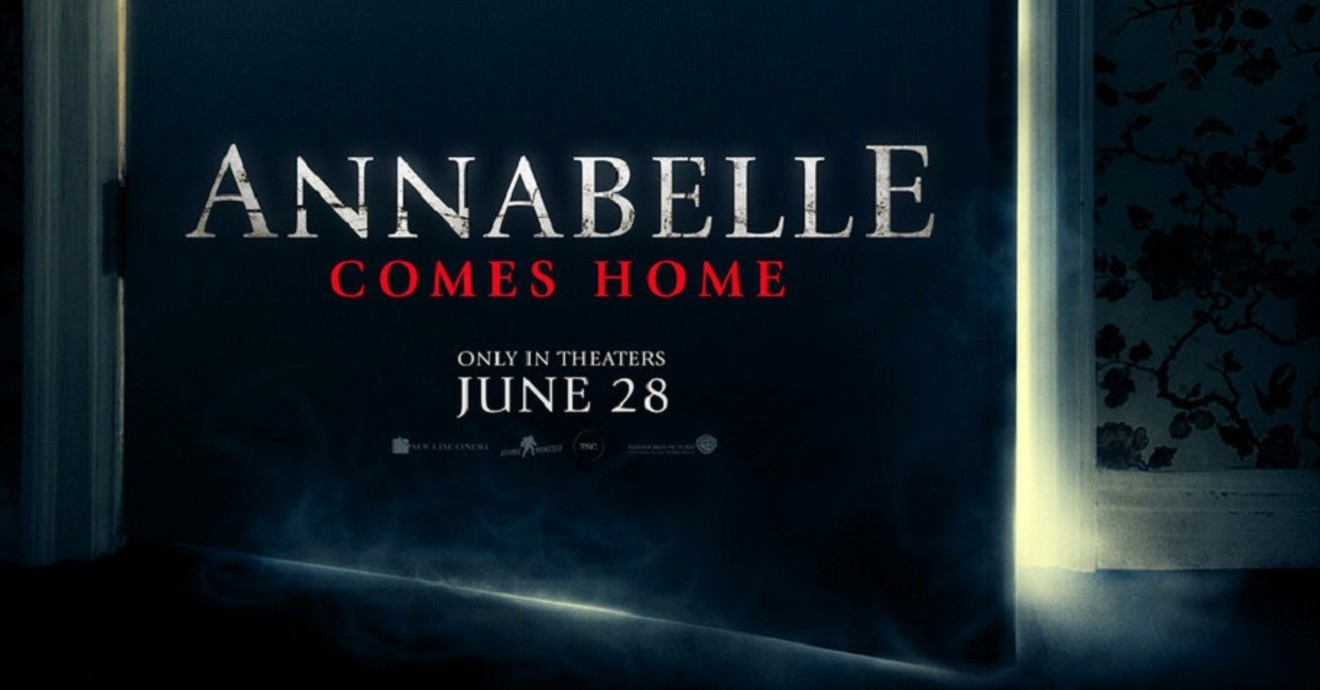 Describe This Movie In One Butthole Surfers Quote:

Rating Using Random Objects Relevant To The Film: 2.5 AC/DC albums out of 5.

Atlantic Records
Tagline: "Welcome to the home of the Conjuring Universe."

Better Tagline: "It's like the Marvel Cinematic Universe, only our characters aren't as goofy looking."

Not So Brief Plot Synopsis: Not content with the current contents of their chamber of horrors, er, "Artifact Room," demonologists Ed (Patrick Wilson) and Lorraine (Vera Farmiga) Wilson have introduced a new occupant, the cursed doll Annabelle. Lulled into complacency by a priest's blessing and a few panes of "chapel glass," the Warrens leave their daughter Judy (Mckenna Grace) home alone with her babysitter Mary Ellen (Madison Iseman). Unfortunately, no one counted on a visit from Mary Ellen's friend Daniela (Katie Sarife), who really really wants into the Artifact Room. For personal reasons.


"Critical" Analysis: There are two enduring ... let's call them "issues" with the so-called "Conjuring Universe:" 1) Why has nobody duct taped Annabelle to a stick of dynamite? and 2) Why are we still pretending Ed and Lorraine Warren weren't utter frauds? To its meager credit, Annabelle Comes Home sort of addresses these in the first 15 minutes.

First, in the opening scene, the Warrens take possession of the cursed doll and, when pointedly asked why they don't just destroy it, Lorraine says, in hushed tones, that would just make things worse. Naturally, there's no follow up to this statement.The judgment of the Warrens, experts in demonology and the occult and veterans of a thousand psychic wars, is clearly not to be questioned.

This is followed by a brief scene in which Ed and Lorraine discover Judy reading a newspaper article questioning whether they're legit. They share a chuckle over the allegations, apparently oblivious to the fact their daughter is being ostracized at school because of them.

Most of the movie takes place entirely inside the Warrens' home and chicken coop (don't ask). And if you thought a Satanic doll was creepy, that '70s wallpaper is the real horror, honey.

This is longtime CU writer Gary Dauberman's first time in the director's chair (he also wrote the script), and he keeps the proceedings brief, at least. And though his aim may have been "atmospheric," the end result is more "series of murky vignettes lurching towards an inevitable sequel." Cinematographer Michael Burgess does an admirable job capturing the browns and yellows of '70s existence.

Grace, whose career so far consists of portraying juvenile versions of main characters (Tonya Harding, Carol Danvers), leads the way capably, and she, Iseman and Sarife handle the indignity of contending with haunted wedding dresses, pianos, and board games believably enough.

We also finally get some Artifact Room action when Daniela is trapped within and forced to confront her feelings of guilt over her father's demise. Still, it's difficult to watch this and not think: did these idiots actually leave their child and her babysitter alone in a house full of cursed relics? Of course followed by: why do they have all these cursed relics in their house? Was a storage unit too pricey?

And almost as hard to stomach as the continuing depiction of the Warrens as fearless monster hunters is the veneration of the Catholic Church, which is manifest in everything from the use of crucifixes and Lord's Prayer in repelling the baddies to Judy saying, "not all ghosts are bad" as she elects to follow the specter of a dead priest into the basement.

First, literally every ghost this family has encountered contradicts that statement. Second, he's a Catholic priest in the 1970s. Odds are he wasn't that good to begin with,

But Annabelle Comes Home is a rarity in that aside from the Warren parent bookends and Mary Ellen's wannabe paramour Bob (Michael Cimino), who spends a good chunk of the movie hiding from a werewolf (I said, don't ask), the main characters are all female and amazingly manage to figure shit out all by themselves. It's just too bad this is another Warren-adjacent property, because the mythology it hints at would be a lot more interesting and a lot less problematic without them around.

Annabelle Comes Home is in theaters Wednesday, June 26. Holy shit: Feeley Meely was a real game!
KEEP THE HOUSTON PRESS FREE... Since we started the Houston Press, it has been defined as the free, independent voice of Houston, and we'd like to keep it that way. With local media under siege, it's more important than ever for us to rally support behind funding our local journalism. You can help by participating in our "I Support" program, allowing us to keep offering readers access to our incisive coverage of local news, food and culture with no paywalls.
Make a one-time donation today for as little as $1.