The Cast of Best of Enemies Makes the Unbelievable Believable 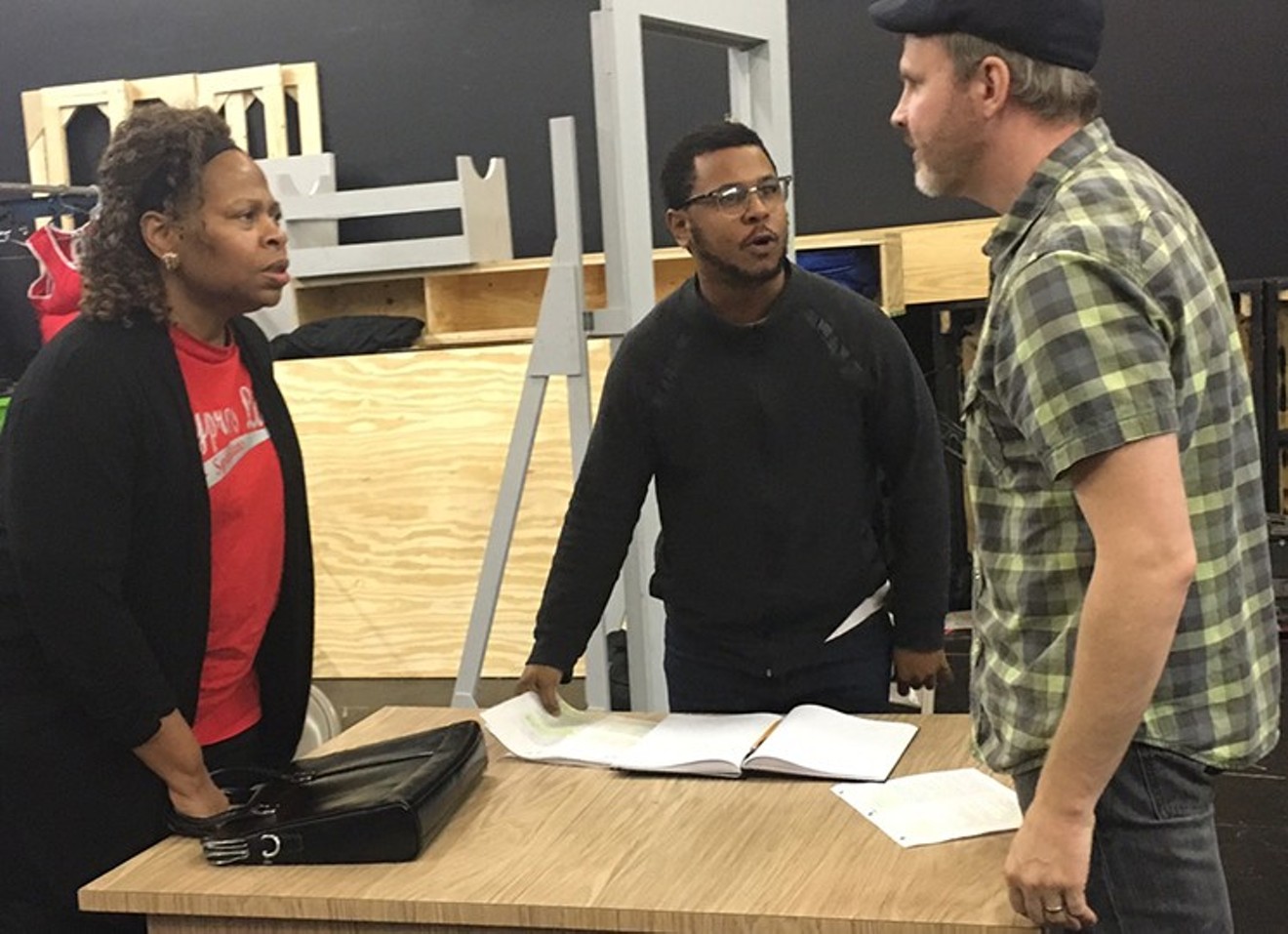 When in doubt listen to The Godfather's Michael Corleone, “Keep your friends close, but your enemies closer.”

Both protagonists in Mark St. Germain's theater adaptation of Osha Gray Davidson's non-fiction Best of Enemies do this with a pungent sniping that's mighty hard to swallow.

Based on a true story set in 1971 North Carolina, C.P. Ellis (Kevin Michael Dean), Exulted Grand Cyclops of the Durham chapter of the Ku Klux Klan and a white racist of the highest order, not only worked arm-in-arm with neighborhood black activist Ann Atwater (Alice M. Gatling), but completely changed his antediluvian attitudes and bonded deeply with her to integrate the new high school, and later became a staunch advocate for civil rights. They both lost friends, jobs, and, in Ellis's case, his wife, in the process, but their common economic struggle was a mighty cohesive force in their joint battle. So playwright St. Germain would have us believe. He behaved much more truthfully in Freud's Last Session.

This is a true story where everything on stage rings false.

If only he had dramatized his thesis, this after-school special might have worked. Instead, in a series of short scenes that end in blackout-like punchlines, he arranges his plot into tiny segments fit for commercial breaks. There are no extended scenes where we might get acquainted with these disparate future buddies, no probing of what lies beneath these two strong characters, only a skip-and-a-jump form of theatrics that sends us reeling from Ellis's ubiquitous dropping of the N-word to a comedy scene where Ann and he race to staple the latest community survey.

Interspersed are scenes with Ellis' wife Mary (Christy Watkins) who wishes C.P. would spend more time at home with his family than attending those pesky meetings in the woods. Daintily coughing while she slugs back Jack Daniels, she's pragmatic as only a wife of a devoted KKKer can be, and we know she's not long for this world. Her death, mercifully offstage, is a catalyst, of sorts, for Ellis's change of heart. We can't be sure, for there's so much that's not fleshed out, so much that's not stated with any emotional conviction or dramatic truth.

Spurred by federal mediator Riddick (Joseph Palmore), these two arch nemeses meet cute, butt heads, swap rejoinders, and wind up on the same side, dropping their prejudices along the way like so many breadcrumbs. There's got to be a better way to make us believe this Hallmark card drama.

Ah, there is. The cast. They make the unbelievable believable.

Ann Atwater deserves a play of her own – all her own. Gatling is thrillingly on the mark as single mother, domestic worker, simple goddess of retribution. When she's on the war path, watch out and get out of her way. Gatling is wondrously convincing as a force of nature, standing up to any man as she battles for the right to be who she is and what she believes. That she is in the right makes her more of an avenging angel. That she knows how to downplay her anger is a great plus, and Gatling knows all this and more. Watch how she dances around Ellis, clutching her purse and brandishing her Bible, ready to fling the holy book for protection if need be. If you mean to take her out, you're going down too.

The more difficult role to play is Ellis, since he truly changes in front of our eyes, from extreme bigot to devoted union organizer and civil rights advocate. A stalwart member of A.D. Players for 18 seasons, Dean exudes decency and uprightness (Harvey, You Can't Take It With You, Juror #8 in 12 Angry Men, The Importance of Being Earnest) and there's a residue of this that lingers under Ellis's hard shell. We just don't quite believe Dean as a hater. To be fair, it's not his fault; not even Olivier could convince us of what St. Germain asks of him. His domestic scenes with Watkins are unvarnished, though, embedded with truth; his horrific rants in his red robes we must take on faith.

Watkins, a Houston Theater Award-winning Best Actress as Annie Sullivan in A.D. Players' The Miracle Worker (2015), plays second fiddle like a Stradivarius. Mary is dying, and the light has all but gone out of her. Buoyed by booze and the flicker of love with C.P. long since passed, her family comes first, always first, she adamantly pronounces. We believe her. Pressed hard by her husband's rampant hatred of those not like him, she glints like flint under the pressure. Here's another character who deserves a play of her own. Watkins gleams, even when St. Germain puts her light under a bushel.

And who can convey anxious conviviality quite like Palmore? One of Houston's finest young actors, he radiates innocent charm while selling you a lemon. His character's federal agent doesn't have much to do except wheedle the two protagonists together, but Patmore does it with such effortless grace that we forget he's only a cipher. St. Germain gives him a quick emotional bio sketch to countermand Atwater's suspicions, but Palmore runs with it like a gazelle.

Director Kim Tobin-Lehl, former Houston Theater Award-winning Best Director for 4th Wall's True West (2017), keeps everything moving as best she can with all those interminable blackouts. A revolving stage would help, but who has one except the Alley? Some Carolina-tinged guitar riffs help speed the process, but the wait between scenes – even precious seconds as the scenes are changed – slows down the drama's momentum (what little there may be). But as one of Houston's most adroit actors, she knows exactly how to give her actors room to breathe, to find those tiny distinguishing touches that define. With no help at all from playwright St. Germain, the actors come alive through Tobin-Lehl's gentle push.

The civil rights era has thousands of stories. This one is the most bizarre, yet it's all true (Atwater spoke movingly at Ellis's funeral in 2005). Why does it resound with such a thud?