Breaking Out of Sunset Place Gives Us Formulaic Senior Feistiness 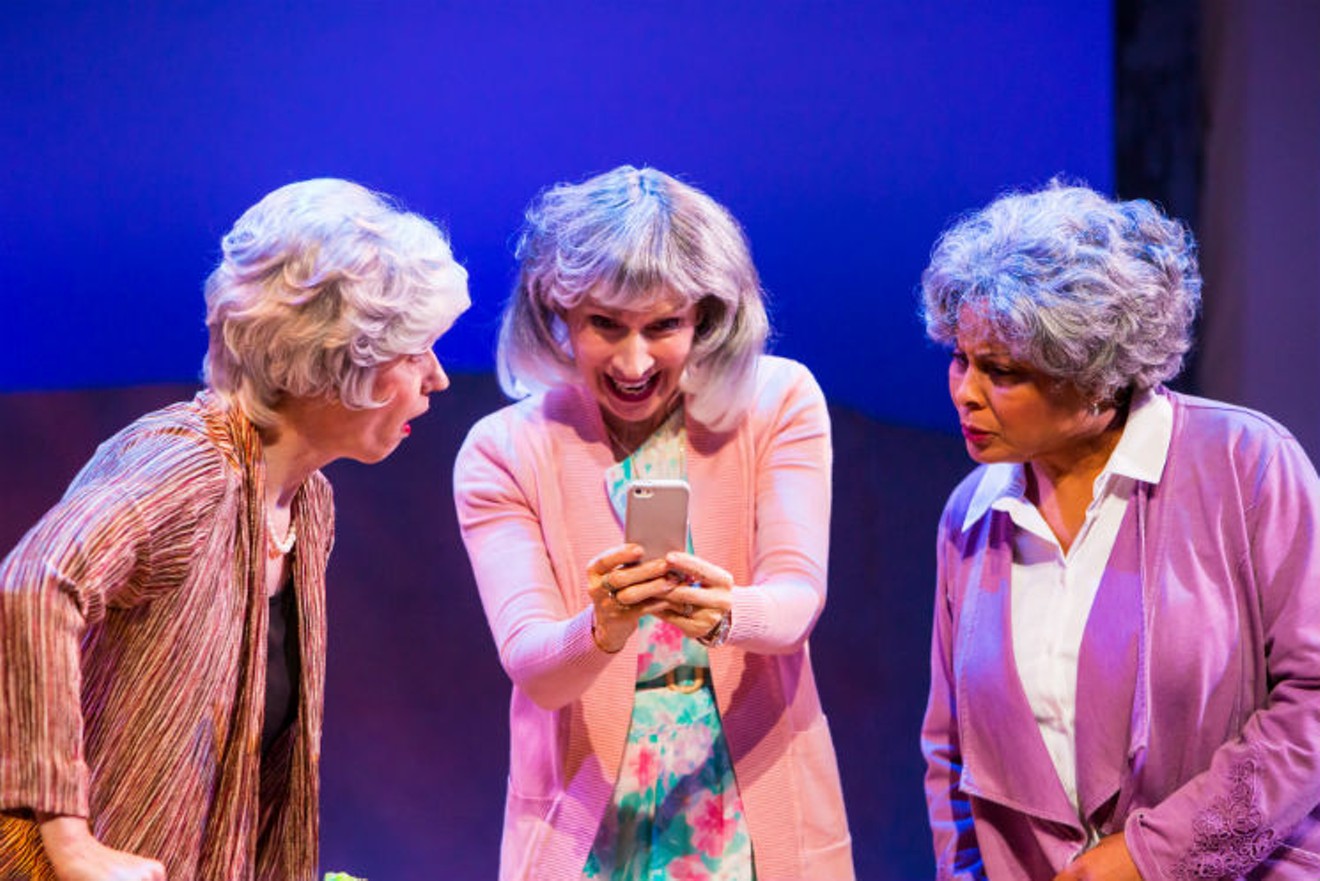 Mary Hooper, Krissy Richmond and Michele Harrell in Breaking Out Of Sunset Place at Queensbury Theater Photo by Christian Brown
'If in the first act you have hung a pistol on the wall, then in the following one it should be fired. Otherwise don't put it there.' By this point, we're all pretty familiar with Chekov's dramatic principle governing irrelevant and superfluous elements in storytelling.

But if a gun must be a gun fired, what is the rule when it comes to a racist character? If a character is blatantly bigoted at the start of the play, shouldn’t that racism have to be dealt with at some point? Or atoned for? Or even mentioned? Or at least not forgiven by the minority wronged?

Not so, it seems, in the world premiere of Patricia Barry Rumble’s "seniors are feisty" formulaic comedy, Breaking Out of Sunset Place. So what if Olivia, an 80-year-old white nursing home resident hisses that she doesn’t like it when fellow resident Maudie, “that Negress”, comes into her room. In Rumble’s story, it’s not a gross offense, it’s just a blip. Simply a way of showing how cranky Olivia is. Besides, the two women will become friends soon enough, so why bother with all that problematic stuff when there are unlikely and poorly formed zany antics to lay out?

While blinders are worn when it comes to the xenophobic start of the play, Rumble delivers an eyes wide open strobing spotlight on rest of the show that allows us to guess at every plot turn and character reveal. When Sunset Place Retirement home residents, Emmy (Krissy Richmond) and Maudie (Michele Harrell) decide to break out of the home and go on an adventure, we know that they’ll end up taking the aforementioned racist Olivia (Mary Hooper) with them. When the ladies are forced to be together, we know that they’ll end up becoming friends. Thanks to writing that telegraphs the coming action, Olivia stammers clues to her true backstory long before its “revealed” in the plot. Everything from the ladies standing up to to a health scare to their final caper comes at us without surprise or suspense.

This could be forgiven if the whole thing at least had a whiff of fun to it. Instead, under the hesitant direction of Marley Singletary, it lurches along, awkwardly paced scene by awkwardly paced scene with only a few real laughs from the entire audience. Sure there will be folks who are amused at the sight of a senior citizen donning motorcycle leathers or an old lady saying “son of a bitch”. But those laughs come cheap. It says something about the quality of the show’s comedy when the one big laugh comes not from anything to do with character or plot, but rather Maudie (at Emmy’s insistence) doing her version of a “don’t leave home without it” Amex commercial.

Without meaty material or energetic direction, the performances suffer as well. Richmond, Harrell Hooper stammer between lines as they try to find some kind of flow, often using repetition to keep things going. As Emmy, a Betty White type of sweet ditz, Richmond overuses breathiness to evoke cluelessness. But it's her physicality that's the real problem. As a former principal dancer with the Houston Ballet, there’s no question Richmond is still and elegant form, but it’s hard to buy that kind of grace from a nursing home escapee.

As the racist/cranky Olivia, it’s not Hooper’s fault that we never really warm to her. Her attempts to evolve from unlovable to simply difficult are on display as is her nice evocation of a woman heavily reliant on a cane and wheelchair to get around. But her comic attempts feel stifled and as if she herself is unsure of how to break out of the one-note given to her character.

As Maudie, Harrell delivers the strongest performance of the bunch and while we can’t truly believe half the things her character does (forgiving a racist, potentially murdering a detective, shrugging off important medicine), somehow she makes it work. We don’t even hesitate (too much) when at her dead husband’s grave; she drops effortlessly to her knees to pray for him. Whatever glucosamine supplements she and Emmy are supposed to be taking in this show, it should be mandatory that Rumble and Singletary make this information known to all of us immediately.

Regardless of what didn’t get translated successfully on the page or stage in Breaking Out of Sunset Place, it should be noted that there are one and a half fist-pumping positive elements of this production. Firstly, the fact that Rumble wrote a play specifically for senior women is something to cheer for. Even more important is that the production team made sure the women in this play were cast accordingly. By now we all know the impediments female actors face after a certain age, so a show that not only casts these but makes them the stars, is something to celebrate.

So where does the half come in? In an interview with Houston Press, Executive Producer, Rose Baldwin stated the importance of establishing an all-female production team on this show. Something laudable in the extreme. And looking at the program, it’s apparent that she almost delivered on the promise. Of the 18 members of the production team listed, eight are men. Just less than half – so how is that an almost? Well, just look at any other program in town it’s rare you’ll find anything close to that ratio. Here the playwright, director producers are all female as are many of the design team members. It’s an important step to parity that we can only hope will continue in Houston and beyond.

Breaking Out of Sunset continues through February 10 at Queensbury Theatre, 12777 Queensbury (CityCentre Houston). For information, call 713-467-4497 or visit queensburytheatre.org. $15-$50.
KEEP THE HOUSTON PRESS FREE... Since we started the Houston Press, it has been defined as the free, independent voice of Houston, and we'd like to keep it that way. With local media under siege, it's more important than ever for us to rally support behind funding our local journalism. You can help by participating in our "I Support" program, allowing us to keep offering readers access to our incisive coverage of local news, food and culture with no paywalls.
Make a one-time donation today for as little as $1.