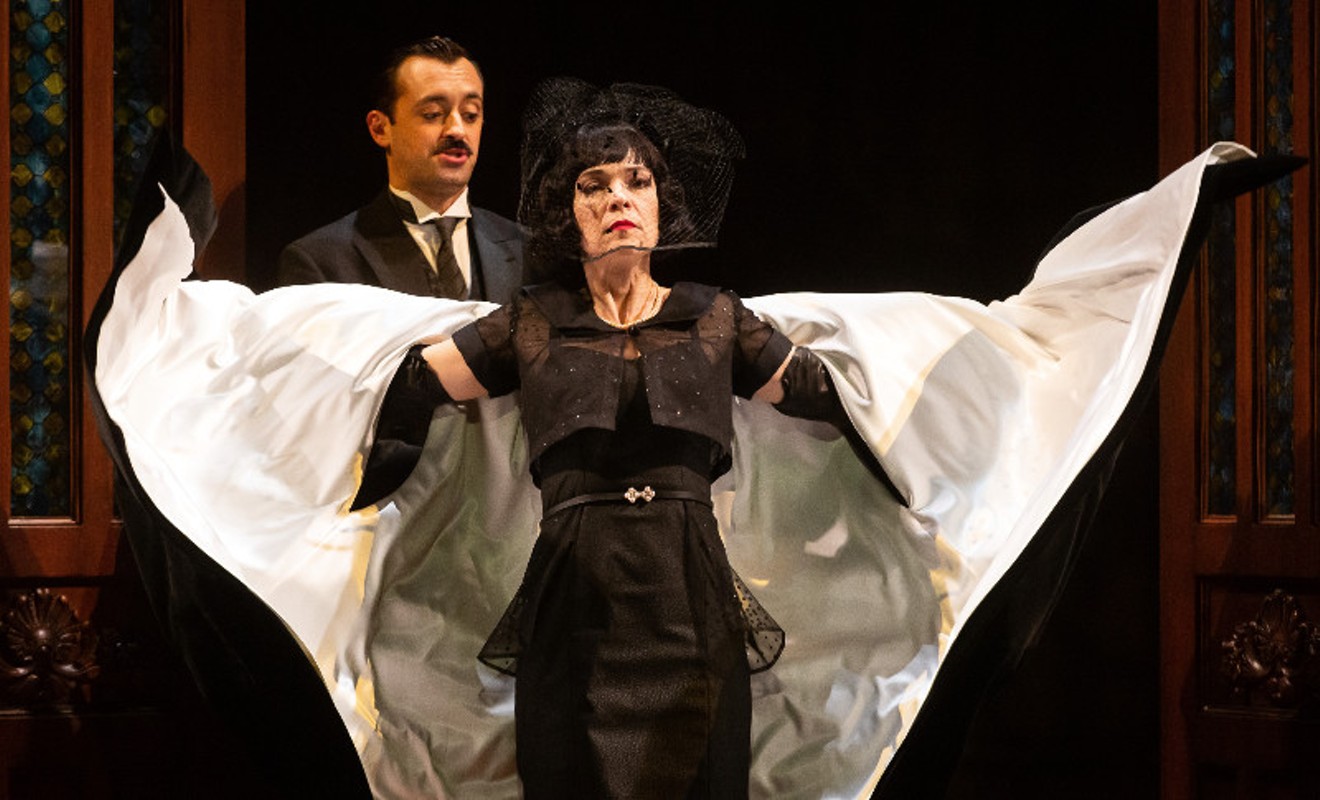 Dylan Godwin as Wadsworth the Butler and Elizabeth Bunch as Mrs. White in Alley Theater's production of Clue. Photo by Lynn Lane

What to make of Clue, Sandy Rustin's stage adaptation of Jonathan Lynn's 1985 screenplay, which was based on the Parker Brothers' board game (1949) that I played for hours in my childhood. Everyone I know played Clue, and when we tired of the murder mystery (Was it Mrs. Peacock in the library with the candlestick?), we switched to Monopoly. But Clue seemed ever fascinating – questioning witnesses, eliciting clues, narrowing down the field of suspects, until you had that Inspector Poirot “aha” moment. Who did it, with what implement, in what room? It felt classy and very adult. I have to admit I wasn't very good at it, always rushing to the conclusion and getting it wrong. But my friends and I played it endlessly.

The 1985 somewhat all-star movie was a bit of a dud at the box office, but its cult status grew over the years, hastened by Madeline Kahn's inspired lunacy and Tim Curry's officious butler, who has a scene-stealing patter monologue that recaps the whole movie in five minutes. Other than that, the film was a goof, played goofily.

The stage version is as faithful an adaptation as you could wish. A silly romp, it's pumped up to 11 by director Brandon Weinbrenner to include reverse action, unnecessary dances, enough eye-rolling for an optometrist's exam chart, and a grand over-the-top acting style that screams, Let's put on a show. See, look at us, the Alley can be fatuous and brainless. Aren't we all having fun?

Well, no, not really. The one-acter (and we're grateful for that) drags when it should skip, and then revs into overdrive to keep our interest from flagging. Everybody's a cartoon, doing cartoony things. The maid's ample bosom gets accidentally bumped into, a guest is kicked in the groin, there's a slo-mo chandelier drop, the cast all run in circles, there's a turntable that's not used very imaginatively, a lot of stale vaudeville jokes (mostly at the expense of inept Colonel Mustard), and two dummies who stand in for two of the murdered victims and get fairly well manhandled during the course of the action, like in Weekend at Bernie's. (They're the most animated of all, though.) Clue isn't clever and certainly isn't very elegant. But, then again, neither was the movie.

There is a saving grace to all this manufactured mayhem, and his name is Dylan Godwin, so memorable in the Alley's Born With Teeth, from last May. No one pops his eyes, exaggerates his lines, and plays to the gallery like him. He makes the perfect obsequious butler, the ring master of this circus mystery. He dons his gloves with meticulous care, he looks plum elegant in his cut-away suit, and has the boneless quality of the great silent film clowns. His death scene is stretched too thin, but who else could croon his swan song with the panache of a Vegas lounge act. And his end recap is a breathless farrago of the comedy's favorite lines mimicking each of the characters. It's showstopping all on its own. Bless you, Godwin.

They let their hair down for this one, and overplay and mug as if auditioning for the Carol Burnett Show. I don't think this works as well as they think it does. But the handsome double stained-glass front doors slide in gracefully, rooms appear just when they're needed, the lightning flashes ominously, and the lights flicker artfully. This is high-end Alley gloss.

If you're a Clue addict (of the movie that is, not the game), then this facsimile will suit. The audience was certainly satisfied. You couldn't hear my harrumphs through all the applause at the end.

Performances continue through August 28 at 7:30 p.m. Tuesdays through Thursdays and Sundays, 8 p.m. Fridays and Saturdays and 2:30 p.m. Saturdays and Sundays at the Alley Theatre, 615 Texas. For more information call 713- 220-5700 or visit alleytheatre.org. $28-$77.
KEEP THE HOUSTON PRESS FREE... Since we started the Houston Press, it has been defined as the free, independent voice of Houston, and we'd like to keep it that way. With local media under siege, it's more important than ever for us to rally support behind funding our local journalism. You can help by participating in our "I Support" program, allowing us to keep offering readers access to our incisive coverage of local news, food and culture with no paywalls.
Make a one-time donation today for as little as $1.