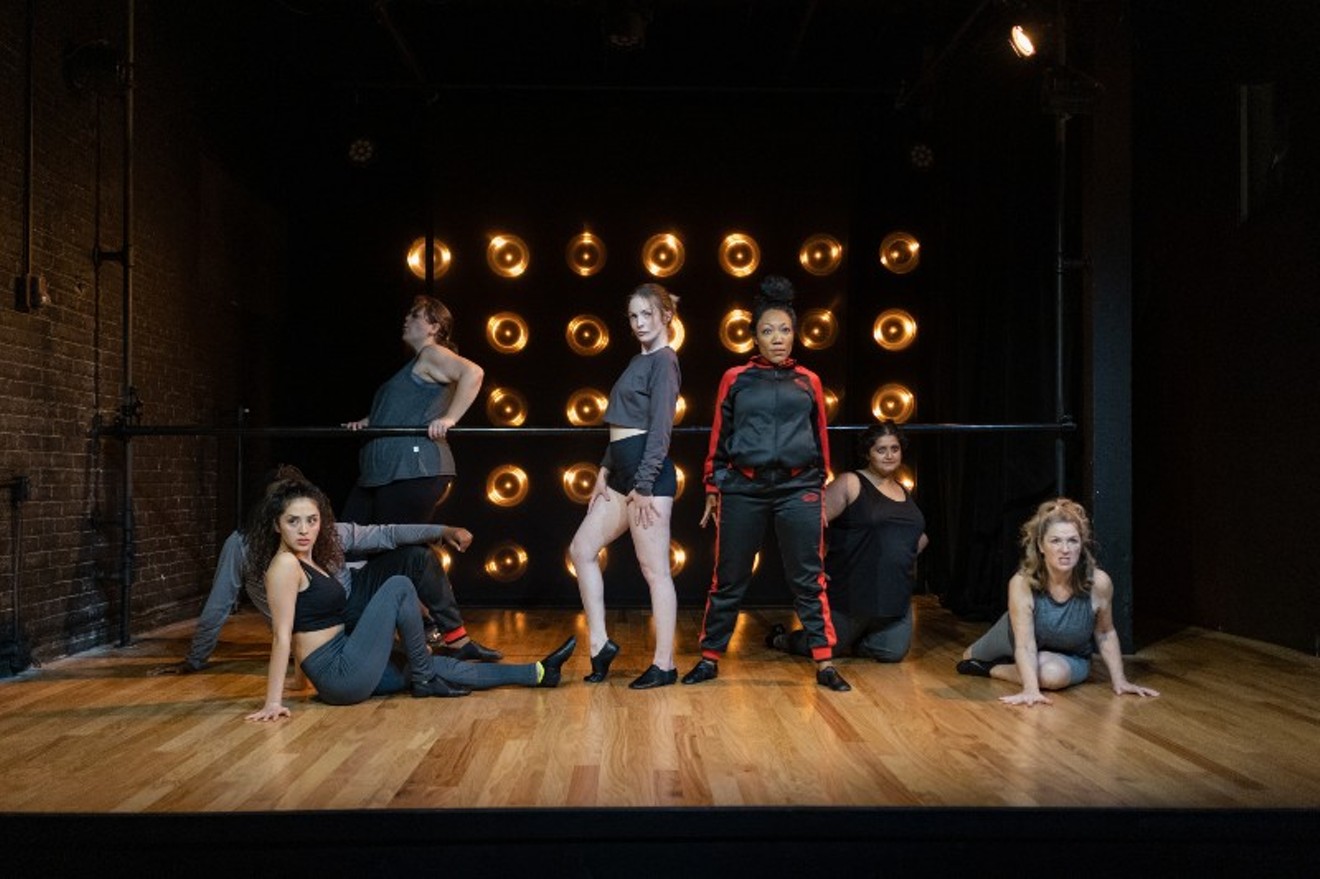 The cast of Dance Nation at Rec Room Arts Photo by Samuel Herrera
Turns out there’s only so many times you can have the word “pussy” screamed at you from the stage before you start to lose interest.

Not that there’s anything wrong with the word. Especially not when it’s coming out of the mouths of 13-year-old girls grappling with their pre-womanhood and what it means to live in a space where ambition, self-worth, and anxiety do daily battle in your evolving psyche.

The issue with the ad nauseam pussy proffering and a myriad of pre-teen female sexual curiosities in Clare Barron’s, Dance Nation (directed by Sophia Watt), is that precious little feels fresh. Or shocking. Or revelatory.

For those of us old enough to remember, it's like Judy Blume with dirtier words. For you younger folks, you’ve seen and heard all of this before in movies, TV shows, or books that claim to be edgy…..masturbation, first periods, looking at your genitals for the first time, fantasies about losing your virginity, and wondering what a penis should actually look like. Yawn and pass the hot sauce.

That Barron frames her examination inside the world of competitive dance should offer some unique angles.

The play (a Pulitzer Prize finalist) centers around a dance troupe based in Liverpool, Ohio. A group of 13-year-old girls (and one boy) meant to be played by adults and represented in the script (and wonderfully in the production) by actors of differing ages, races, and body shapes.

Led by their perfectionist, unempathetic coach, Dance Teacher Pat (Greg Cote), the girls learn a new routine (based on Gandhi, perhaps a funny commentary on the sometimes forced meaning of modern dance) that they hope will take them all the way to Nationals.

However, even the pressure cooker of who will get the lead and who will screw things up feels limp. If you’re expecting the athletic energy of Sarah DeLappe’s, The Wolves, a thrilling play about a teen girl soccer team, you’re out of luck. While the cast performs some dance to several top 10 pop songs in the production, it’s not meant to be the wow factor.

Nor does the show have the tension-filled build-up and climax of Netflix's docu-drama Cheer, about how a team comes together to compete in a national, high stakes competition.

Instead, what we get are monologues, flashbacks, and flashforwards of the young women's lives overlaid with a competition that most of the girls aren't that committed to. It's just something they do for now. For better or worse.

It’s in these quieter moments when the cast isn't dancing or screaming girl power chants at us that Dance Nation has something quite special to offer. Where Barron lifts the hood on her characters and allows us to see the inner workings. It’s also an excellent showcase for this uniformly terrific cast.

There’s Amina (Sophia Mobbs), the true talent/competitor in the troupe who shows us that being the best is often a lonely, difficult place to be. Her best friend Zuzu (Callina Anderson), a lesser dancer trying to rise to her mother’s lost glory/compensate for her health, secretly harboring fantasies about a life where she can enchant her way to happiness. Sophia (Lisa Fairchild), a girl who knows it all, yet knows nothing. Connie (Anjana Menon) still a child playing with figurines, unprepared for the dark future ahead of her. Metaphysical Maeve (Molly Wetzel stepping into the role at the last minute and doing a seamless job) seems to have youthful powers that get trod on as maturity sets in. And the one boy, Luke (Avery Vonn Kenyatta), in love with Zuzu and missing time with his mum.

But for true originality and the thrill of fresh adolescent rage against the machine, there is only one monologue that transcends the show’s shortcomings.

What if you are “perfect”? What if your body is banging and your face is considered gorgeous and you have a brain to boot? A brain that’s smarter than almost everyone you meet? Should you acknowledge the praise you get? Say, yeah, I am the shit? Tell those that think you’re a smoking hot package to go to hell because you’re more than a pretty face?

These are the fantasies that Ashlee (Shannon Uphold) flaunts in her aggressive world domination monologue. All bravado and swagger, ultimately, it’s a young woman trying on a costume. Trying to come to terms with the power she has. Power, she realizes, is both hard-won and simply genetic.

It’s this juxtaposition of idealism and insecurity where Barron finally hits on a new thread. When you have it all so young, where do you go? How do you keep the high going? We get flashes of the pressure of Ashlee’s vaulted position later in the play, showing that even perfection, the thing young women are told to strive for, is a precarious notion not necessarily yielding reward.

Ultimately and unfortunately, a couple of astute monologues and great performances can’t make up for the novelty or excitement that Dance Nation lacks.

In perhaps one of the weirdest pre-show conversations I've ever had, I bumped into a colleague who confessed that not knowing anything about the show, they thought there was a zombie or vampire element to the play.

I laughed at the time, but now that I think about it, maybe the female undead or forever alive was just what Dance Nation needed to shake up the pre-teen trope tree. Would long moments of shouting about their pussy ring deeper if emanating from those that walk the dark shadows?

It’s a stretch. A big one. But dammit, I wanted to like this show so much I’d be willing to try just about anything. Shoulda, woulda, coulda, as the kids say.

Dance Nation continues through February 5 at Rec Room Arts, 100 Jackson. For more information, visit recroomarts.org. $10 - $50.
KEEP THE HOUSTON PRESS FREE... Since we started the Houston Press, it has been defined as the free, independent voice of Houston, and we'd like to keep it that way. With local media under siege, it's more important than ever for us to rally support behind funding our local journalism. You can help by participating in our "I Support" program, allowing us to keep offering readers access to our incisive coverage of local news, food and culture with no paywalls.
Make a one-time donation today for as little as $1.