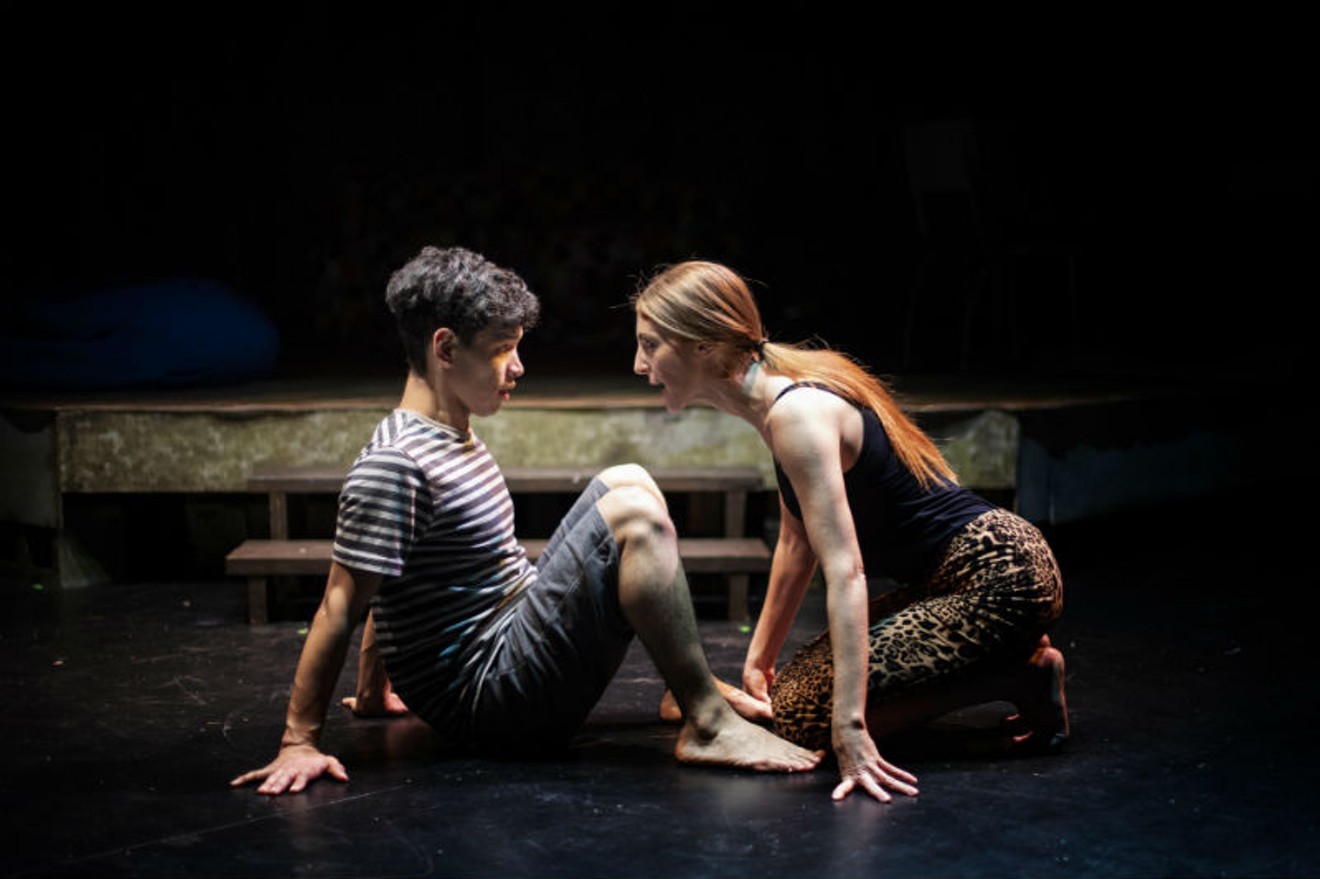 Aaron Joseph Herrera and Adina Owen in Dead Eye Boy Photo by Gary Griffin
There are shows where the performances are so superb, they distract, making a less than stellar play seem better than it is. Conversely, a decent enough play may be made less palatable by a weak performance.

Both of these scenarios are present in Dirt Dogs Theatre’s production of Angus MacLachlan’s, The Dead Eye Boy.

On the superb side, we have Adina Owen and Bill Giffen playing Shirley-Diane and Billy, two ex-addicts who meet in rehab, fall in lust with each other and decide rather quickly to get married.

It's not that they don't love each other; they seem to. It's just that each one has dragons at their doorstep threatening to undo the good work they've done getting clean and the fortune they've had finding each other.

“I’m ugly, evil, a snake,” Shirley-Diane says to Billy. It’s not a normal response to a marriage proposal, but then she’s not a normal woman. At 29, and a repeat relapser, Shirley-Diane is terrified that she's going to screw her newfound happiness up. And she's scared that Billy will see her for how and what she believes she really is.

Owen plays her with palpable toughness, explosive anger and overt sexuality, a thin veil over the damage that’s been done to her and the damage she’s done to herself.

Billy, on the other hand, holds his problematic emotions in tight, opting instead for the rehab code of conduct – release your anger, seek your higher power and let calmness be your guide.

Giffen’s infuses Billy with an effortless kindness that soothes. When he talks of the tough road to sobriety, we listen with empathy. As he struggles to give up swearing, we laugh at his gaffes and wish him greater restraint next time. It's remarkably tough to portray easy going with any kind of natural flow, but Giffen’s brand is not only spot on, it's also alluring to watch.

The problem isn’t so much with these characters, but rather the illogical and faux disturbing places MacLachlan wants to take them. And that’s where the issue of weak performance appears and where the play itself falters.

Shirley-Diane has a 15-year-old son, Soren (Aaron Joseph Herrera), the product of a rape she suffered when she herself was a teenager. She could have gotten rid of him she boasts, but instead decided to keep what was hers.

But keep doesn't mean care for or properly love. MacLauchlan gives us several scenes, flashbacks and present day, illustrating the abuse mother inflicts on son. Is she punishing him for what was done to her? We’re not really sure. We do know that we'd like to punish him at times for his monstrous behavior.

More than simply a moody, smart-mouthed teen, Soren is at turns cruel, manipulative and violent.

When Billy, with the patience of Job, tries to teach him to drive, Soren bites Billy's hand so hard and deep that a trip to the emergency room is required.

It's a scene meant to show Soren's fear of adult touch given his mother's occasional outbursts, we figure. But then how to parse the family scenes that immediately follow where no discussion or acknowledgment of the biting takes place, not to mention the many future touches by Billy that don't send Soren into rabid behavior?

Perhaps the moments of Soren’s many outbursts (or scenes of his own abuse) would have more urgency and resonance if Herrera could lean into the character with greater depth. Instead, his performance is quite wooden, rendering all the tension and upset rather limp.

And in a play that attempts to go into dark overdrive in the second act, you need all performances going the distance if we’re to stay on the ride.

As tensions in the house increase from Soren’s misbehavior, Billy losing his job and Shirley-Dianne stressed and on the verge of relapsing, things begin to implode.

Disturbing is always good in my books. I like to be uncomfortable. But the disruption MacLachlan gives us feels box-ticking rather than a complex trajectory.

Yes, Shirley-Dianne seems to treat her son as a sex object one minute and a dog that needs to be punished the next, but with no examination or explanation, her behavior feels oddly creepy rather than a germane piece of the puzzle.

For Billy, Soren is not only the ruination of peace in his home, he’s a reminder of his own misspent youth. Throttle the kid or help him out? We’d believe that Billy actually struggled with the choice if MacLachlan and Herrera gave us reason to connect with Soren at all.

What Billy and Shirley Diane eventually do may be a surprise to audiences, but both narratively and emotionally the final, meant to be revelatory, scenes land with a thud thanks to all that has not gone on prior.

While performance and script are the two most obvious ways a play can succeed or fail, there's another important consideration, and that's direction.

I'm sure that Director Bonnie Hewett was trying to portray space and place when she decided to have the main set on a riser (the family's living room) and to place the flashback and out of the home scenes on the flat stage floor.

The thing with this type of staging is unless you're in the front row, or a row with no one sitting in front of you, any action that takes place on the flat floor is partially or completely blocked from view.

Unbeknownst to me, I’m pretty sure I managed to pick the absolute worst seat in the house for sightlines for any scene outside of the elevated set. This meant that about one-third of the show was like listening to a radio play, not horrendous, but not the experience that live theater is supposed to be.

I don’t know how many times I’ve said this over the years, Directors, sit in your theater seats. Get to know sightlines. Make sure that whatever you program is available to everyone. Otherwise, your work is lost.