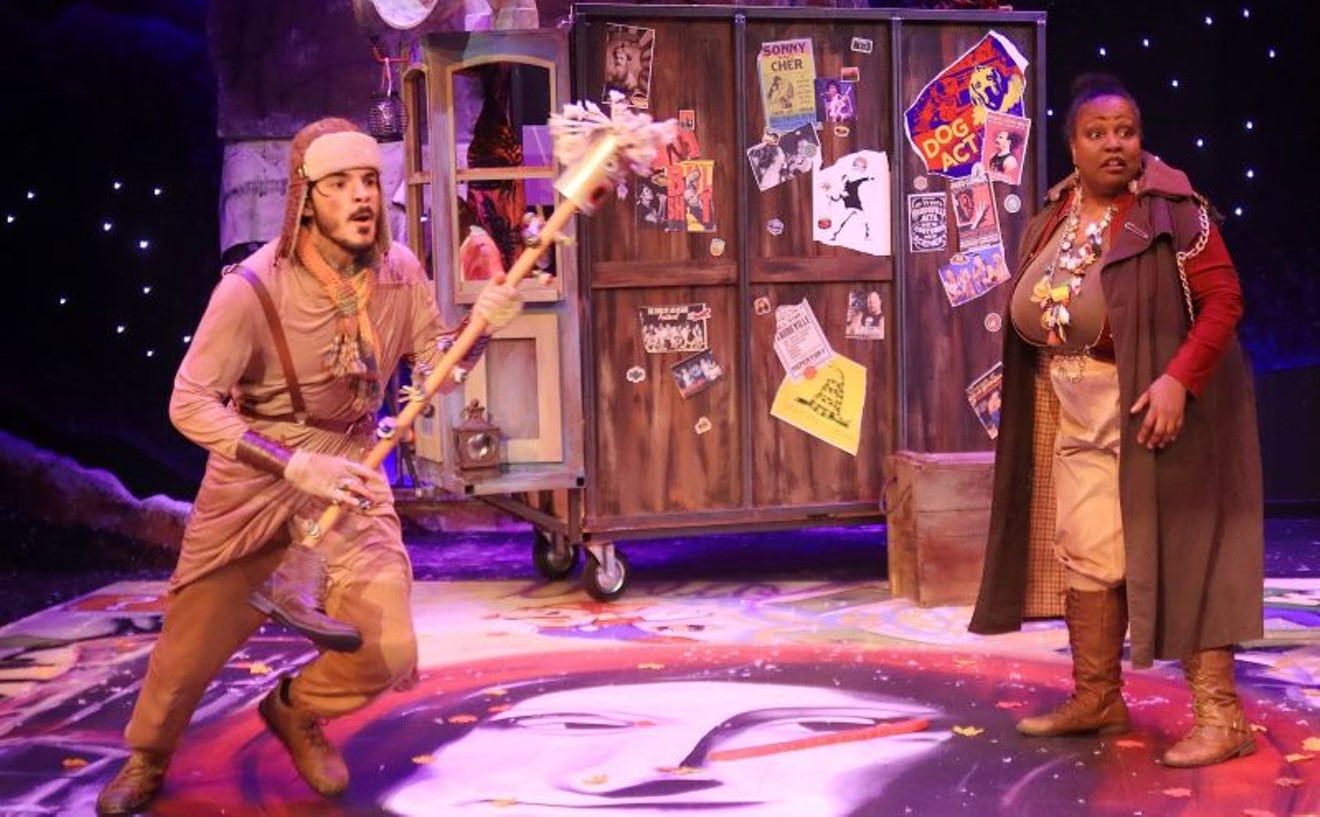 Ah, the dystopian world of the future in Liz Duffy Adams' Dog Act, currently wagging its shaggy tale at Main Street Theater, looks suspiciously like the theater of the absurd. That particular genre is tasty only for particular connoisseurs. I'm not one of them.

Generations after some devastating world calamity, two traveling players, Rozetta Stone (Tamara Siler) and her human Dog (Jose E. Moreno), plod through the blasted country on their way to China, the land of unbridled luxury and wonder, the fabled repository of all earthly knowledge. Rozetta is assured there will be a willing and appreciative audience waiting for them and their show. The vaudevillians must keep walking and pulling their pageant wagon until they get there.

Rozetta is Mother Courage, indomitable through tragedy, persevering through tribulations, eating fish that like look like hybrid squirrels – oh, dear, they are hybrid squirrels, mutated through the centuries – forever carrying the stories she knows in a mutilated patois of her own. Language and legends have mutated also. “Swing Lo, Sweet Chariot,” has morphed into “Sing Yo, Street Harriet;” everyone knows the words. The climate changes at a moment's notice. Winter one day, summer's broil the next, spring's radiance the following. Warring tribes and beastly antagonists lie in wait out there. But she must keep going. Known to us for her belt-to-the-balcony performances at Paul Hope Cabarets, Siler has presence to spare, a grand warmth, and immediate likability. She's a grand Rozetta, commanding and solid, sweet and motherly. You'd follow her to the ends of the earth if she asked.

Dog is more literal and literate. He expresses himself in fine language. He's still a dog, or a dog wannbe (see the play for that), for he growls and barks and nuzzles up to Rozetta for a head rub. He smells trouble immediately, is on the alert, and is faithful companion and theater partner. He's the only “talking dog” in existence, a sure-fire crowd pleaser. In his leather Minnesotan fleece hat with earmuffs, Moreno makes an exceptional dog. He makes a whole lot more, and is undisputedly best in show. Watch how he curls up by the fire, see his fierce and true reactions to what's going on, he did everything but scratch for fleas. This is Moreno's Main Street debut and it's a keeper. Whoever is responsible for casting him gets a gold star.

Rozetta and Dog are surprised in the woods by another pair of traveling actors, or so they say, Vera Similitude (Shondra Marie) and Jo Jo the Bald-Faced Liar (Chaney Moore). Vera is very proper, speaking in high-flown phrases, whispered cadences and well-rounded sentences. She's forgotten nothing of culture, it seems. Jo Jo has no culture. She's the dangerous one, we think at first, quick to flare, for she loves her knives and violence of any kind. Is she really a showman? We'll find out later.

But first, we're introduced to the Shakespearean “rude mechanicals,” Coke and Bud, (Trey Morgan Lewis and Nathan Wilson). They are the Scavengers of what's left on earth, crude, mean, stealing anything, enslaving everyone. In a Shakespearean rhythm, they converse in nothing but curse words, “Fuck” being their word of choice. If you thought “Pussy” was overused in Clare Barron's Dance Nation at Rec Room Arts last January, you ain't heard nothin' yet. They do everything but burp and fart.

Adams is an intelligent writer, she knows what she's doing, but I think she misses the mark entirely with these two bumpkins. When the ruffians storm in wearing license plate epaulets, medallion chest armor, and crowns made out of, what else, Coke and Budweiser, their shtick is quaintly alarming, somewhat funny, but it quickly palls into numbness, and then annoyance. I can only grasp that Adams is warning us what we will become if we don't up our own game right here, right now – epithet spouting no-nothings. She may very well be correct, but these two characters are well past their sale date. Director Andrew Ruthven has a clear eye for detail and rising tension, but there's nothing he can do to fix the problem with the obnoxious Coke and Bud.

The play stalls at times for quirky monologues, except Dog's heartfelt love poetry recitation, that fill in some of the horrific past history, or tell vignettes like a deranged Aesop, or a bit from the vaudevillian's rep, The Mortality Play, which is a zip-drive mashup of Bible stories. Like the Renaissance morality play of its age, Rozetta's drama has reformed itself into the current age's mortality play.

There's s subterranean sense of dread which subtly emerges, while the graffiti-laden set by Afsaneh Aayani with its twisted rusted ironwork and the “found” clothing choices of Victoria Nicolette Gist are redolent of a world gone to seed. Sad to say, steampunk and leather Goth will still be fashionable in the centuries ahead.

For all the death and decay that swirls around them, Rozetta and Dog are blessed by a sweet ending. They will plod on to China come what may. So there is hope after all in this blasted world of the future, full of foul-mouthed uncouths, duplicitous people (I'm talking to you, Vera), and mindless rapacity. Adams thinks our redemption lies in theater, in the stories we tell, in some shared remembrance, however muddled and confused. She may be right. I'm just not sure she says it so convincingly in this play.

[I know I'm right. For there was a real dog in the audience Saturday night. A magnificent German shepherd service dog. It stayed remarkably calm during the loud parts, but started to squirm during the lulls. Near the end, it fled with owner in tow. It knew. It should talk to Adams and teach her some new tricks.]

The production will also be available for streaming April 7-17. $20-$40.
KEEP THE HOUSTON PRESS FREE... Since we started the Houston Press, it has been defined as the free, independent voice of Houston, and we'd like to keep it that way. With local media under siege, it's more important than ever for us to rally support behind funding our local journalism. You can help by participating in our "I Support" program, allowing us to keep offering readers access to our incisive coverage of local news, food and culture with no paywalls.
Make a one-time donation today for as little as $1.