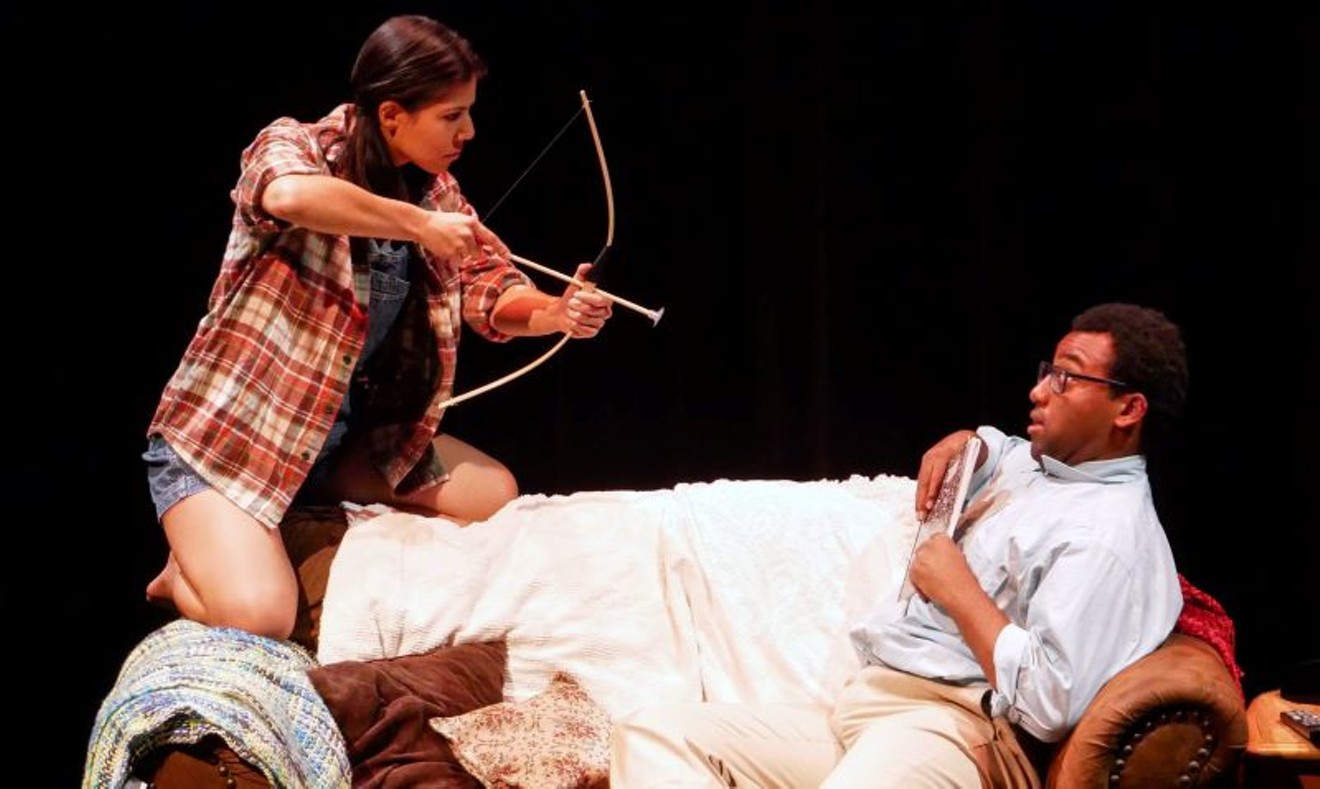 Thunderclap Productions has presented scant shows over the years, but their productions aren't scant. They may be small in scale, but thick in meaning.

Rum and Vodka, from 2012, was a haunting monologue from Irish playwright Conor McPherson that wallowed in the downward trajectory of The Man (Andy Ingalls) during a very boozy weekend in Dublin. Ingalls was incandescent in the role, mesmerizing, dangerous, unforgettable. For that part, he won “Best Trooper” in our inaugural 2012 Houston Theater Awards. In 2020, before the pandemic shuttered everything in sight, Michael Perlman's From White Plains, blistered the walls of MATCH as Greg Cote and Wesley Whitson, both nominated for HP's Best Actor that year, transformed the act of gay bullying into a fierce and provocative rite of passage.

Now, after two years of international theater inactivity, A. Rey Pamatmat's Edith Can Shoot Things and Hit Them appears as if freshly born. Thunderclap remains as provocative as ever.

As part of Thundeclap's annual festival of LGBTQ plays, under the aegis of the John Steven Kellett Memorial Series, Edith, which premiered in 2011, is a wry coming-of-age story, dripping whimsy as it tells its shaggy dog story.

Eleven-year-old Edith and older brother Kenny exist on their own in their family house. Mom is dead but not forgotten, and dad is too preoccupied with new girlfriend Chloe to be a presence in their young lives. Whenever he remembers to, he deposits money in the bank account so they can pay for food and basic necessities. They are raising themselves, but his absence is epic.

While Kenny (a sweetly sympathetic Alan Dongho Kim) acts as surrogate mom and dad, cooking meals and getting her dressed, feisty Edith (Jordan Merritt) keeps guard with her rifle. “I will protect us,” she proclaims, sitting watch in the night with her stuffed frog Fergie, then being too tired for school in the morning. She's smart, independent, too wise for her age, and terribly scarred from the missing parents. Kenny is starting to crack under the pressure of responsibility, but he's found an out, of sorts, in the teasing arms of fellow student Benji (a comically effective Anthony Quinn Berry), a nerd who's hot to trot, although he has no earthy idea what that means, yet he knows all the medical definitions of what he wants to do to Kenny. When mom throws him out of the house when she finds a love letter to Kenny, Benji moves in. Now there are three floundering kids on their own.

The play is soft and pleasant, detailing the quotidian in easy scenes that might meander if not for the actors' personal appeal. Director Trin Viêt Hô has placed her three actors way front and center, which blocks a bit of the action, and she's allowed Merritt to stomp her lines and play-act a kid instead of being one. She comes across like tempestuous Rhoda in The Bad Seed, rather than misunderstood pre-adolescent. But she's softened by the quiet presence of Kim, whose slow burn finally explodes. It's a welcomed outburst.

What doesn't work so well is the absence of adults. They're on the telephone, they sit in the car outside, one even enters the house – a dramatic twist nicely plotted for the end of Act I – but Pamatmat's narrative keeps them offstage which renders them and the play strangely contrived. Concentrating on the kids certainly keeps them in the spotlight, but the author has to tumble through unbelievable hoops to keep the adults at bay. They become hearsay.

Children becoming adults and the chasm between broken children and broken parents, is sincerely told. While the shards of their lives don't fit together with smooth dramatic logic, their story is sincere. We wonder what will come next for these resilient, precipice-proof young people, and that makes Pamatmat's gentleness and easy charm worthy of a look.

Edith Can Shoot Things and Hit Them continues through July 10 at 7:30 p.m. Monday, July 4, and Thursdays, Fridays, Saturdays; and 2:30 p.m. Sundays at MATCH, 3400 Main. For more information, call 713-521-4533 or visit thunderclapproductions.com. Pay what you will.
KEEP THE HOUSTON PRESS FREE... Since we started the Houston Press, it has been defined as the free, independent voice of Houston, and we'd like to keep it that way. With local media under siege, it's more important than ever for us to rally support behind funding our local journalism. You can help by participating in our "I Support" program, allowing us to keep offering readers access to our incisive coverage of local news, food and culture with no paywalls.
Make a one-time donation today for as little as $1.