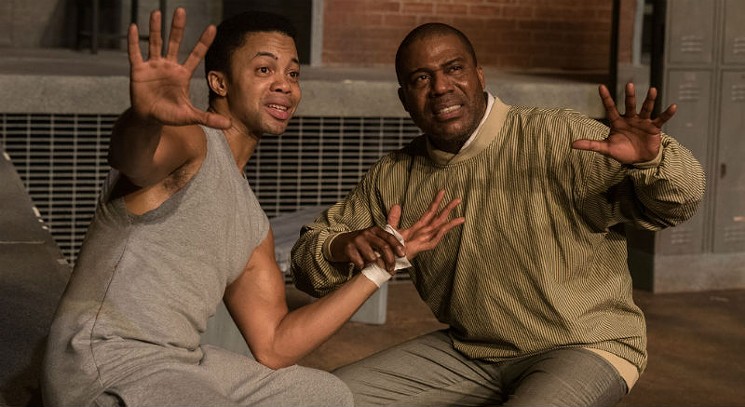 Believe it or not, these two disparate types became friends in 1965, during the most turbulent times for race relations in the United States. It's a weird pairing only Hollywood could fabricate with such glamorous fakery, but it did happen, without quite the facility and neat trappings that Power suggests. But most of this story is basically true. And that's really odd.

For all the drama this play wields – the assassination of Malcolm X, the rise of the Nation of Islam, the black power movement, the history of American racism – it doesn't pack the essential knockout because nobody past a certain age knows who Fetchit was, or what he represented on screen.

Stepin Fetchit (real name, Lincoln Perry), former vaudeville star, perpetuated the most heinous of racial stereotypes: the coon. Shiftless and lazy, usually sleepy and ofttimes imbecilic, this no-count roustabout stole chickens, danced some, and shirked any work. The offensive characterization paid handsomely. He was a special type, for sure, the prototype, but his wince-inducing dumb darkie act made people laugh, especially white audiences. Some black audiences surprisingly appreciated this jive-ass who mocked “massa” by being so oblivious to him.

Unless you're old enough to remember Judge Priest, Steamboat Round the Bend, Stand Up and Cheer, Dimples, On the Avenue, or religiously watch Turner Classic Movies, you wouldn't know his work. After his career cratered, his reputation was viewed with such loathing that when his movies were later broadcast on TV his scenes were invariably edited out of the prints. But in the early '30s, his “laziest man in the world” routine was one of the most recognizable of any star's personas in Hollywood. A savvy businessman he parlayed his boneless shuffle into a very lucrative, if short, career. Certifiably, the most famous black actor of his time, and now with a star on the Hollywood Walk of Fame, he lived a flamboyant high life for a decade – cashmere suits, Chinese servants, a white chauffeur, and a slew of limousines, one a champagne Cadillac with his name emblazoned on the door in neon lights.

He was the first black actor to receive featured screen billing, and his scenes were especially written to emphasize his character's flagrant idiosyncrasies. No black actor at the time had a studio contract: Perry did. Yes, his characters (bellhop, handyman, field worker, domestic) were shiftless and indolent to the extreme, monosyllabic and barely intelligent, yet Perry managed to keep these racially weird creatures slightly off-kilter from the movies they appeared in. He's from another world, some bizarre alien being. Nothing really harms him, no matter how many kicks in the ass he gets. He slowly drawls a “Yesss, boss,” and stumbles out of frame, impervious to whitey. There was a particular strength in the idiots he portrayed, and no one did it better. Of course, the question remains, why do it in the first place?

The NAACP was not pleased with Perry's blatantly demeaning caricatures, and the changing demographic of the movie-going public slowly put an end to them. If Perry wanted to portray anyone different on screen, the moguls at Fox, his home studio, wouldn't allow it. No studio would have allowed it, not for any black actor. Ironically he had boxed himself in. He had to keep playing Stepin Fetchit. But the times they were a'changing. And Fetchit had to go.

Fast forward to 1965 and a sports complex in Lewiston, Maine. Cassius Clay, the world's preeminent boxer and 1960 Olympic Gold medal winner, has defeated reigning champ Sonny Liston the prior year. Clay has converted to Islam, dropped his “slave name,” and emerged as if from a chrysalis as Muhammad Ali. He is brash, boastful, and beautiful (and Brent embodies them all with lilting grace, athletic ability, and a charming innocence.) He relishes a rematch with Liston, vowing to slug Liston's ugly mug once and for all and be crowned “The Greatest.” But phenom Ali is worried. Even he needs an edge. That's why Perry's invited into the inner sanctum.

In his Hollywood heyday, Perry befriended old Jack Johnson, legendary world champ and icon of the nascent black power movement. What about that “anchor punch?” Ali wants to know. Perry doesn't remember anything about Johnson's mythic “snap punch,” but the disgraced actor needs Ali as much as Ali needs Perry. Just being in the same room as the energetic boxer elevates the disgraced former movie star. Maybe a movie is what they both need. Ali has the charisma of a movie star, and Perry desperately wants to resuscitate his career and honor. After the fight's over, of course, if Ali wins.

During the weekend, countless conflicts escalate. Rashid (Henry Edwards Jr.), a former pimp and now a stalwart Nation of Islam acolyte, stands close as Ali's bodyguard to protect his famous meal ticket from the wrath of Malcolm X's ideologues who seek revenge for their leader's recent assassination at the hands of the Nation of Islam. Openly hostile to interloper Perry, Rashid despises his antediluvian movie caricatures of black men, but his fury is held in check by Ali who must acquire Johnson's secret. Ramrod stiff, Edwards conveys menace, and you wouldn't want to confront him in a dark alley. Even when standing silent, his steely, threatening aura adds shivery danger.

There are flashbacks to Fox Film Corporation where founder William Fox (an irascible and surly Trevor B. Cone) is gently finagled by Perry into a more favorable contract with unprecedented personal perks. These are among the play's most revealing scenes. Shrewd and wily, Perry outmaneuvers Fox with his disarmingly deft negotiating skills. Unlike his witless screen characters, Perry was no buffoon.

Ali has recently married the beguiling Sonji (Rene? Rivon, rather beguiling herself), a former party girl who's hidden her past from him, and she's beginning to chafe under Islam's paternalistic edicts. But after one conversation with Perry about unleashing her true self, she quickly changes her shapeless dress and head covering back to tight skirt and towering hairdo. She will not be tamed. The couple's love is amply demonstrated, but Ali is a staunch Muslim and we know the relationship is doomed.

Power extenuates the play so everyone gets a flashy moment of confrontation. It's a round-robin form of dramaturgy: Ali with Perry, Perry with Rashid, Rashid with Sonji, Sonji with Ali, Ali with Rashid, and on and on. The points are salient, stirringly played, just drawn out and slightly mechanical.

Brent is an ideal Ali – nimble, fierce, ego rampant, yet always looking for more validation. Under that swagger, entirely justified, there's somebody inside still lost. He speaks the truth and demands others do the same, which he proclaims more than once, but when Sonji speaks her truth to his power, she suffers the consequences. Brent, thoroughly alive and buzzing, is crushed by such brazen intransigence. They play this defining moment with believable heartache and lively passion.

Though he doesn't resemble young star Fetchit (who was reed thin with shaved head), Carmichael bears an uncanny resemblance to the elder Perry. Stooped and weighed down by his past, he retains the vestiges of his innate natural performer. Carmichael etches the ineffable sadness of a man whose life has gone with the wind, and who craves redemption with his own form of validation. With a jaunty step and showman's flair, Carmichael achieves a kind of benediction, a saving grace if you will, for Perry's tarnished Hollywood legacy as Stepin Fetchit.

This fascinating true story doesn't end so much as stop, with Perry, alone in the gym, watching Ali's lightning-fast, one-round KO of Liston on TV. Ali has used the anchor punch that Perry conjured at the last moment. It's a triumphant moment, but for what purpose, and for whom?