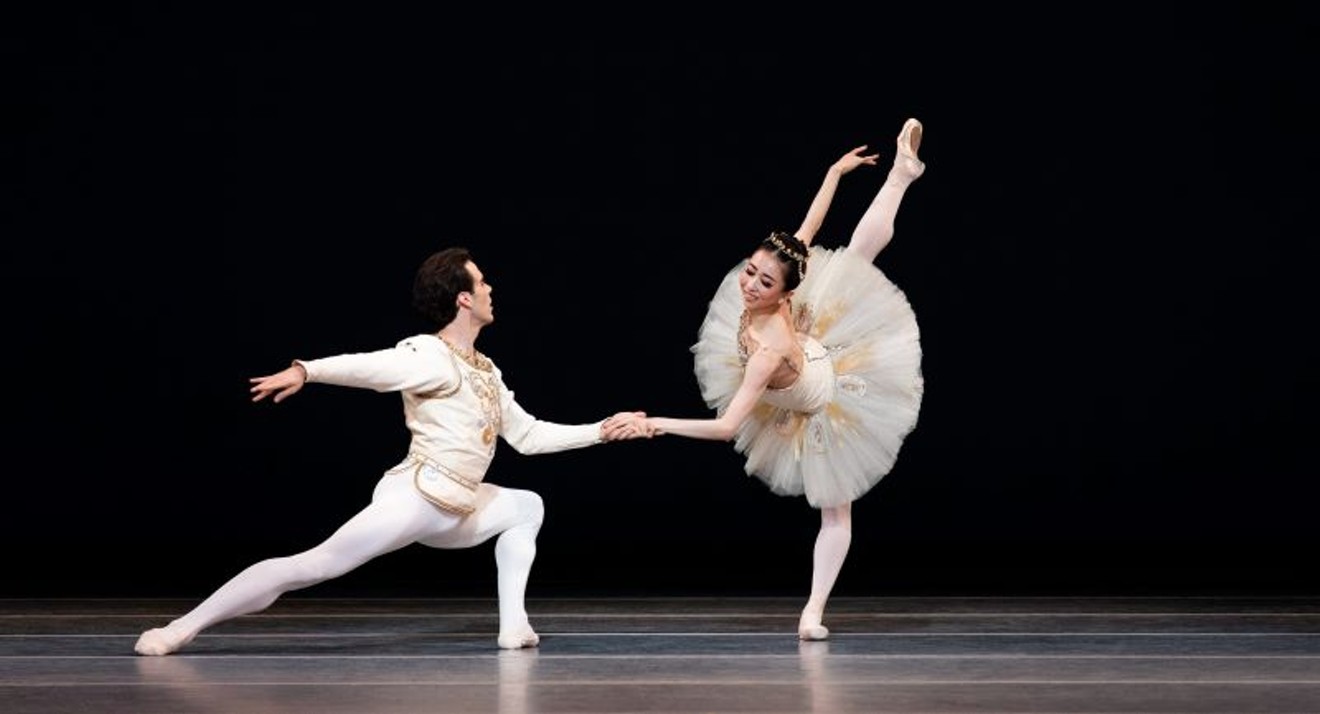 Two stage masterpieces in one week makes me light-headed.

First was Lin-Manuel Miranda's Hamilton via Broadway at the Hobby, then, the next night, George Balanchine's Jewels (1967) at Houston Ballet. Anything else this week and my head will explode.

The preeminent choreographer of the 20th century, Balanchine forever changed classical ballet. He made it dance. He matched movement to music like no one before, and barely anyone since. Although he created story ballets (Apollo, The Prodigal Son, Slaughter on Tenth Avenue, A Midsummer's Night Dream, a one-act Swan Act, The Nutcracker, Don Quixote), his passion for dance was to make the composer the star of the show. His genius as a dance maker was to make the music visible through movement. Plots didn't interest him, for the music was the story; he just supplied the action. He didn't create the “abstract ballet,” but he made it synonymous with his name.

At the same time, he pared down scenery and extraneous stage effects. He picked up the pace, accelerated the steps, made ballet athletic, physical, and sexy, while keeping it clear and elegant. At his purest he adored black and white – tight white tee shirts for the men, black tights, white socks (so the feet would be set apart and clearly seen, so he said, like Astaire, his favorite dancer) and sleek leotards for the women. But, of course, nothing in his work was ever simple. When he went full out, like in La Valse (Maurice Ravel), Stars and Stripes (John Philip Sousa), Vienna Waltzes (Johann Strauss II, Franz Lehár, Richard Strauss), the stage pictures were ravishing. These classics are still plot-less, but what stories they tell.

Jewels is a primer of classical ballet.

In three acts, it's Balanchine's love letter to dance history. The set is a series of receding pleated drapes, swagged with tassels and framed with a large drape overhead. That's it. The costumes by legendary designer Karinska bring dazzle and color with their jewel-encrusted bodices, tunics, and necklaces; but it's Balanchine who gives the show life, energy, and astonishment.

It was made on his stars at the New York City Ballet and its starry ensemble. Past legends Patricia MacBride, Edward Villella, Jacques D'Ambroise, Violette Verdy, Patricia Neary, Suzanne Farrell were showcased by Balanchine as if encased by Tiffany. But do not fear, Houston Ballet has shining stars of its own, some who even outshine the original dancers.

“Emeralds,” set to Fauré's suite from Pelléas et Melisande and incidental music from Shylock, is homage to the Paris Opera Ballet, Europe's oldest ballet company that traces its origins to Louis XIV and the very beginnings of classical ballet technique. But it's also an homage to Fauré, France's most acclaimed composer of his era, whose music straddled the romantic and the modern. Father of impressionism, his simple but elegant melodies with subtle hints of dissonance profoundly influenced Debussy and Ravel.

Everything here is diaphanous and wispy, as if seen underwater. Two lead couples (Melody Mennite and Aaron Daniel Sharratt, Soo Youn Cho and Harper Watters, all exceptional) pair with a trio (Tyler Donatelli, Chandler Dalton, Allison Miller, bright and bouncy) and a female corps of ten. They play, switch partners, swirl to Faure's eddy-like music of flute and harp, wrap a partner in a circling arm, yet stretch outward as if hoping for someone else. During one segment, Cho and Watters click into position as if automatons. Sometimes, one of the women will flick up the edge of her long soft tutu (very Paris Ballet) with a carefree air. This all seems the very breath of youth, mixing and matching, experimenting, living a beautiful pipe dream.

We can make of this what we want. The plot's in our imagination as we watch how Balanchine puts his unique spin on Fauré. It has a glow to it, an aura of spring, youth, and smell of green. The ballet ends with a patented Balanchine mystery. The women have left the stage. The three men sink to the floor on one knee. They sweep out an arm, brushing the floor, before they extend it out and forward, stretching into space, yearning. Have they dreamed these fascinating, playful women?

“Rubies,” set to Stravinsky's Capriccio for Piano and Orchestra, is, we imagine, homage to the playfulness and sexy energy he found in his new home, America. Balanchine demurred when asked what he was saying in this ballet. He slyly said this is how you move to Stravinsky.

True, but this spiky work is packed with fun and adventure that is our country's hallmark. There's a lead couple (Karina Gonzalez and Charles-Louis Yoshiyama, both jaw-droppingly awesome) and a third lead known as the “kick girl” (Jessica Collado, equally amazing). They prance through the score at breakneck speed, slapping palms, skipping rope, running in circles, and having one hell of a time. They swing their hips – pre-Fosse – smack the tips of their toe shoes on the floor, and push the air away with outstretched arms. They flex their feet, walk on their heels, trot like horses, and hunch their arms in gestures that say, Who cares. It's exuberant, a mad circus romp.

In Rubies' most iconic image, Collado (who exudes a wondrous and wry playfulness) is manipulated by her four cavaliers. They lift her leg, put it down, lift the other one, turn her around, bend her over, all while she smiles at them as if to say, I know what you're doing...and I like it. The women are in control in this edgy ruby world.

“Diamonds,” set to Tchaikovsky's Symphony No.3, “The Polish,” is Balanchine's tribute to the world of Russia's Imperial Ballet, where he was trained, and to the legacy of Marius Petipa, the great choreographer of the 19th century. The work, which echoes all the great “white acts” of Petipa's iconic ballets Swan Lake, Sleeping Beauty, Bayadere. exudes elegance, cool classicism, and an ethereal white glow due to the superb performances by Yuriko Kajiya and her most attentive partner Connor Walsh.

Kajiya is magnificent. She has always been a special dancer at HB, but here she radiates command, majesty, musicality, fluidity, warmth. She seems to expand as she dances, taking the air and flying with it, playing with the music and breathing it in. She stretches time. She balances as if suspended on a wire. I'm not a foot fetish, but look at those arched feet! Perfection. Thankfully she has Walsh to support her. Could you ask for a better prince? He dances with manly presence and grace. Is it Balanchine who brings out the best of the best?

During the finale, the entire ensemble of 34 dancers promenade to Tchaikovsky's buoyant “Polonaise” and fill the stage. The work flashes electric. But then that's Balanchine.

Jewels is quite a work. If you can pull your eyes off the principals, watch the patterns in the background that weave through the three acts. Witness a master at work. The corps never stops, a kaleidoscope of depth, variety, invention. This is ballet as pinnacle. You'll never see Fauré, Stravinsky, and Tchaikovsky quite the same again. As I said, it's a masterpiece.

Jewels continues through March 6 at 7:30 p.m. Friday and Saturdays; 2 p.m. Sundays. Wortham Theater Center, 501 Texas. For information, call 713 227 2787 or visit houstonballet.org. $25 -$208.
KEEP THE HOUSTON PRESS FREE... Since we started the Houston Press, it has been defined as the free, independent voice of Houston, and we'd like to keep it that way. With local media under siege, it's more important than ever for us to rally support behind funding our local journalism. You can help by participating in our "I Support" program, allowing us to keep offering readers access to our incisive coverage of local news, food and culture with no paywalls.
Make a one-time donation today for as little as $1.