But we know better. Not just because the woman is stuck in place, buried up to her waist in a mound of barren earth. We know better because this tragicomedy is the work of Samuel Beckett, master of the absurd. Nothing is quite ever as it seems. Plot and even theatrical constructs are certain to deteriorate. Disorder is the only order with entropy thwarting all expectations.

As the hot sun beats down on her, all Winnie has for distraction are her memories and a bag full of ordinary, everyday items she carefully unpacks, utilizes, and puts away each day. Among them; a waning tube of toothpaste and brush, lipstick, glasses, and her hat. There’s also a gun, brought out as if flirting with Chekov himself, and left within arm’s reach.

Occasionally a man, her feeble husband Willie crawls out from behind the mound to mutter something from the newspaper he reads or to offer monosyllabic responses to Winnie’s constant admonitions and requests for conversation. But Willie is little company or comfort. She is alone as she literally sinks into the sands of time.

And yet still, Winnie speaks of finding joy in what little she has and can do. Every day she finds a reason to declare it another happy day, so far.

Unlike Beckett’s most famous work, Waiting for Godot (written six years earlier) where the protagonists wait for greatness while life passes them by, Happy Days sees Winnie working her hardest to savor each little moment she has access to, even as fear, dread and sorrow bubble up from the depths of her soul.

Not grabbing onto these small things would mean the end, after all, and Winnie isn’t ready for that. Instead, she clings to routine, ritual, delusion, and memory to help make sense of the uncertainty and merciless passage of time and existence itself. In other words, classic Beckett themes come out to play in grand harmony.

And thanks to a superlative production now onstage at Catastrophic Theatre, we not only get Beckett’s harmony in Happy Days, we get the whole damn symphony.

The term theatrical dream team gets tossed around like bagged salad these days – easy but often limp. But there is no doubt that company co-artistic directors Jason Nodler (Directing) and Tamarie Cooper (as Winnie) together have the it factor.

Thirty years of working together shows up here as creative trust so exquisite it’s sometimes hard to focus on the play at hand.

Winnie is one of theater’s most prized and difficult roles. An hour and 40 minutes of existential, absurdist dialogue almost all to herself, requiring a range of off-center emotions. In the wrong hands, it’s easy to imagine an audience losing focus no matter how funny the play often is.

Cooper however grabs us and never lets go. At turns comedic, tragic, delusional, practical, shrill, and vulnerable, she navigates Beckett's quick switches from humor, to humor in sadness, to just plain sadness so adroitly we don’t even see it coming.

But it’s Cooper's heart that really makes this a bravura performance. More specifically how she lays her whole self on the line in this production.

With nothing more to work with but her torso in Act I and only her head as the earth mound envelops her further in Act II, Cooper gives us something bigger than her body or her voice. We get let in deep as she deeply lets it all out — a woman afraid of aging out of beauty, out of love, and out of time. It feels remarkably intimate, this connection she creates with us. Something truly special.

Something that could only be teased out by a director who knows her as well or better than anyone.

It’s true in Happy Days, as with all of Beckett's plays, extensive stage directions are included and mandatory. Nodler, therefore, has no choice but to work with prescribed instructions indicating Winnie’s movements, her pauses, line delivery, etc.

But stage directions aren’t soul directions, and the trust/artistic talent Nodler harnesses in Cooper’s performance speaks volumes for what a meaningful collaboration can yield.

Covered in dirt, his bare back to us, showing up for the minimalist of moments to spurt out a few hoarse words or holler grunts from behind the mound, Dean seemingly creates a character out of nothing. 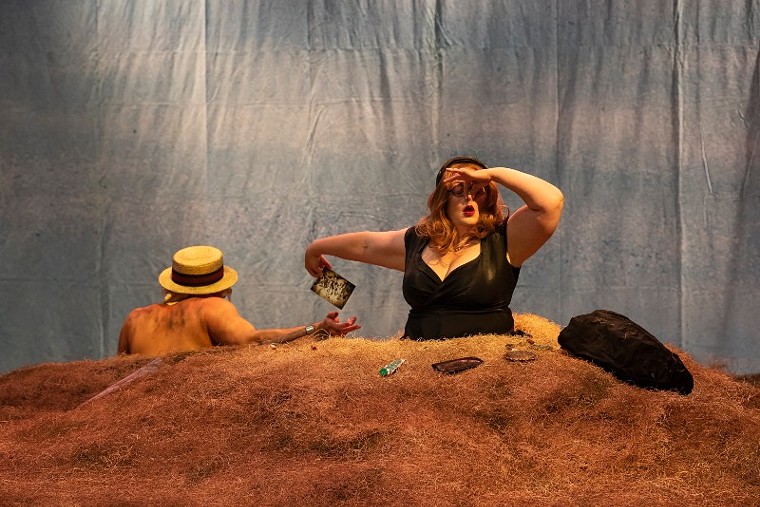 
Should we pity his feebleness? Rage at his neglect of Winnie? Laugh at how ridiculous he is? Delight when he shows some kindness to his wife?

Dean makes the answer yes to all the above with nothing more than his strained voice and precisely vibrating/jerky movements.

Dean is a master at portraying odd characters and once again, he's found a way to make odd feel fresh even if we're not exactly sure what it is we're getting with Willie. It’s almost as though we need to create an 'acting with your back to the audience' category for Dean in this show.

As in all of Beckett's works, great characters don't lead to greatly understood endings. The conclusion to Happy Days is no end at all really, rather a question.

Throughout the play, Winnie asks what will happen when there are no more words to say? When words fail her?

"I can say no more but I must say more," she tells us weakly in the final act, only her head visible from her earthen cage. Winnie is tired and waning. Happy times are now few and far between.

Whether that cage is to become a grave or the grave is the thing that will set her free is up to us to ponder. Or perhaps Winnie cannot be extinguished after all. Perhaps there is no such release for her, destined to live trapped for eternity, her gun remaining close but unfired for the rest of time.

Performances continue through October 15 at 7:30 p.m. Thursdays, 8 p.m. Fridays and Saturdays and 2:30 p.m. Sundays (with a special Monday performance at 7:30 p.m. Monday October 3) at the MATCH, 3400 Main. For more information, call 713-522-2723 or visit catastrophictheatre.com. $35 suggested.
KEEP THE HOUSTON PRESS FREE... Since we started the Houston Press, it has been defined as the free, independent voice of Houston, and we'd like to keep it that way. With local media under siege, it's more important than ever for us to rally support behind funding our local journalism. You can help by participating in our "I Support" program, allowing us to keep offering readers access to our incisive coverage of local news, food and culture with no paywalls.
Make a one-time donation today for as little as $1.