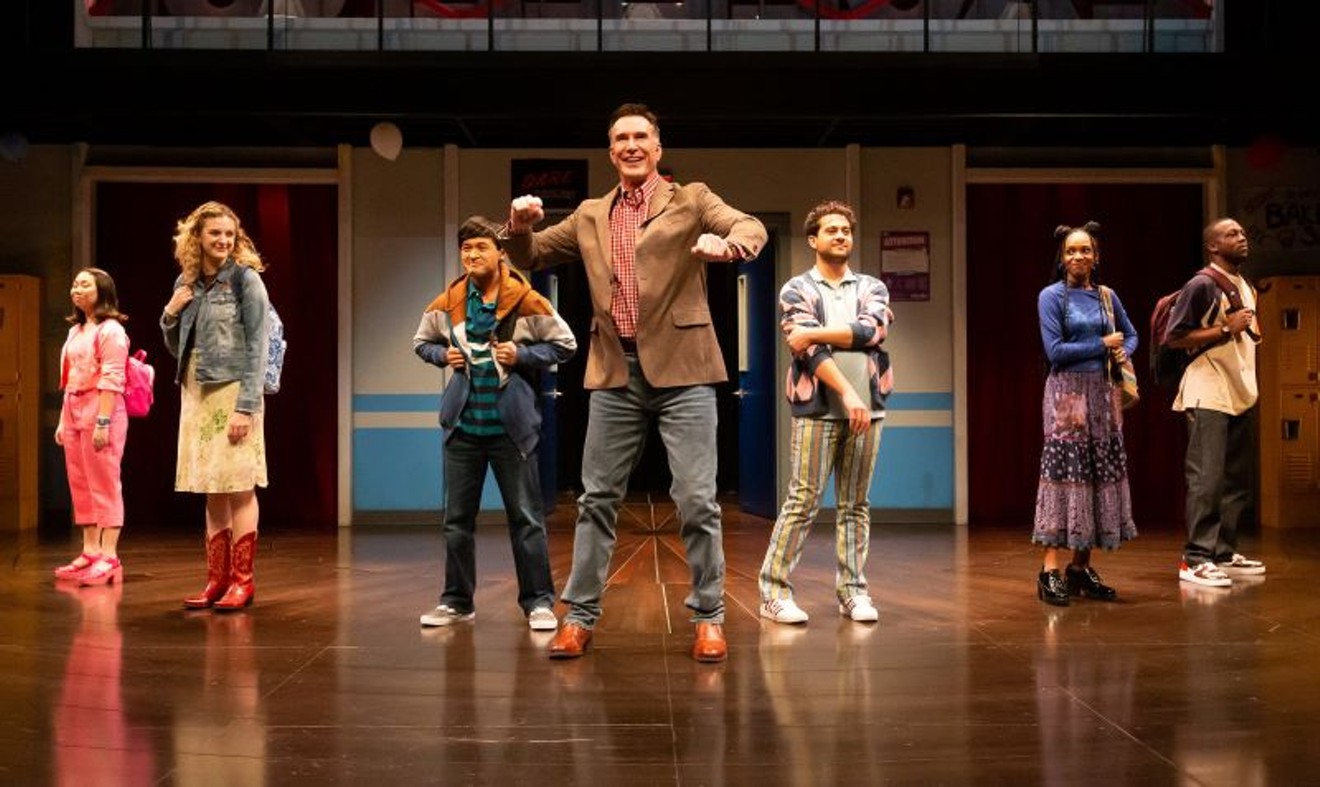 The actors give it their all in Alley Theatre's production of Vichet Chum's High School Play: A Nostalgia Fest. Photo by Lynn Lane

May I suggest a moratorium on high school plays.

Not plays performed in high schools. Good Lord, no, more of those, please. More arts, more music, more theater. High school theater invokes some of my most fragrant memories (I wasn't voted Best Thespian in senior year for nothing.) No, I mean plays set in high school. In one week we've been hit by two: Dance Nation at Rec Room and the latest, High School Play: A Nostalgia Fest, Vichet Chum's world premiere at the Alley.

I'm done with teen angst, raging hormones, fantasies and banalities. Granted, I went to high school in the medieval period; but, trust me, no one, male or female, ever talked of “pussy” power, as they do so vociferously in Nation, nor did our little group of thespians in Lebanon, Pennsylvania, ever compete in a state-wide theater competition as they do in High School. Who knew that Texas is obsessed with drama with the same fervor as Friday night football?

High School is pleasant, lovely, smooth, sweet...and much too long. Workshopped through the Alley Theatre's Ucross Residency in Wyoming and further developed at the Alley All New Festival, the play needs a box of red pencils. It runs three hours!

In a Carrollton, Texas high school, the theater department ramps up for the state-wide finals, which include Oratory, Duets (two-person scenes), Humorous, One-Act, and various individual acting categories. This is a big deal, especially for veteran drama teachers Dirkson (Todd Waite) and Ms. Blow (Melissa Pritchett). The school lost last year, and it's not about to lose again. They prime the kids with rah-rah slogans, psyche them out with cliches, and are not above throwing the guileless students under the bus if it means a win. Waite and Pritchett – in her tacky faux leopard blouse and leather skirt, thank you costumer Ari Fulton – are determined in their mission. They mean well, are well-oiled with alcohol, and plot their strategy.

The star-struck kids, on the cusp of something, are determined yet also clueless. Dara (a cuddly Daniel Velasco) is the younger brother of the school's former star thespian. He's also Asian, perfect for the role of the King in the school's upcoming production of The King and I. He's their ace, until Paul (Jarred Tettey), openly out, transfers from New York. We're told he's a phenom actor, but Tettey is so laid-back and soft, it's difficult to believe it. We never see his power, and writer Chum never provides it. Paul slyly eyes Dara, and we know exactly where this play is going.

Kailee (Sabrina Koss), Dara's girlfriend, suspects something's off. He's never quite there with her. She's hot to trot, but he treads tentatively. Rich (Ricardo Dávila), a flaming queen, minces and prances, tossing barbed quips like confetti. Didn't this stereotype go out of fashion years ago? Dávila brings snap and edge to his performance, but Chum fails him badly.

Sophie (Kiaya Scott, in the evening's most poignant characterization) is the bold, fierce black girl who knows her worth...and her power. When she delivers her valedictorian address and foresees her future, her voice drops and suddenly she's an adult, full of strength who seems to know everything – a wondrous oracle. Allison (Mai Le) carries a torch for Dara and is the comic foil for Rich. When she hears that Kailee has broken up with Dara, she sidles across the floor like a crab to be near him. Le is lovely.

Primarily, High School is Dara's coming out party. When Paul gently places his hand on Dara's leg while they're watching a video, Dara freaks and rushes away, but we know what's going to happen, if only because we've seen it so many times before. Chum doesn't give us any surprises; we're way ahead of him. Too many monologues stop the flow and reprise what we already know. These people may be lightly sketched, but the actors, abetted by the ultra-smooth direction from Tiffany Nichole Greene, have already revealed their inner lives. We get it twice the first time.

Chum has much to say, but he keeps saying it.

His major theme turns out to be carpe diem (“seize the day”), via 17th century English poet Robert Herrick's “To the Virgins, to Make Much of Time” with its famous first line, “Gather ye rosebuds while ye may.” Dara wises up. At the finale, Paul takes his hand and blossoms fall like a benediction.

This revelation comes out of the blue, since Dara and Paul haven't had much of a spark between them all evening. We take this on faith – or nostalgia – like the play.

High School Play: A Nostalgia Fest continues through February 13 at 7:30 p.m. Tuesdays through Thursdays and Sundays, 8 p.m. Fridays and Saturdays and 2:30 p.m. Saturdays and Sundays at Alley Theatre, 615 Texas. Proof of vaccination or negative COVID-19 test within 72 hours required. Masks must be worn in the theater. For more information, call 713-220-5700 or visit alleytheatre,org. $30-$91.
KEEP THE HOUSTON PRESS FREE... Since we started the Houston Press, it has been defined as the free, independent voice of Houston, and we'd like to keep it that way. With local media under siege, it's more important than ever for us to rally support behind funding our local journalism. You can help by participating in our "I Support" program, allowing us to keep offering readers access to our incisive coverage of local news, food and culture with no paywalls.
Make a one-time donation today for as little as $1.