Screaming at the Symphony With Harry Potter 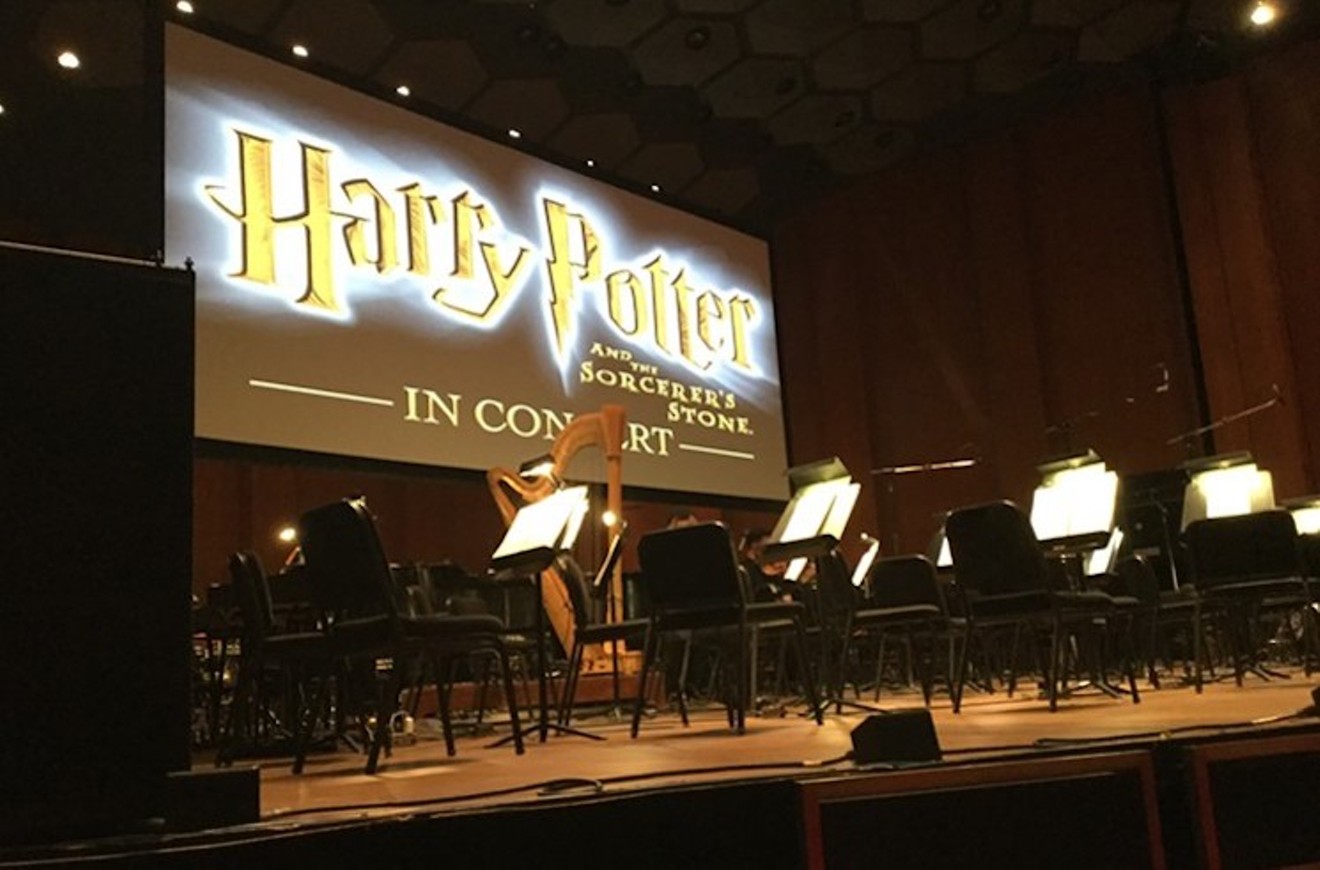 Shortly before the show began. Photo by Katy Rouner
For a guy who spent 14 years selling classical sheet music and instruction manuals for musical instruments, I don’t go to the Houston Symphony nearly as much as I should. When I do go, it’s generally to indulge in a high-class bit of pop culture, through touring productions like Final Fantasy: Distant Worlds. Friday was the first time I tried out the whole “watch a movie with a live orchestra” shtick, with Harry Potter and the Sorcerer’s Stone.

My eight-year-old daughter is obsessed with Harry Potter. Thoroughly and completely obsessed. She has Gryffindor robes and a custom-made wand, and sometimes refers to Harry as her brother. This was also her first-ever trip to see the symphony live, something she’s been keen on ever since she started mainlining Lindsey Stirling every chance she gets.

I think John Williams is one of those composers up there with Randy Newman, where we’re just so used to them being the go-to folks for whatever is the defining mainstream cinema moment at the time that we forget to actually listen to the music. It’s John Williams. The theme will be sweeping. There will be a lot of French horn. It’s the flavor text of a million fandoms that we all can instantly recognize, and yet always wonder if something so…consumable is actually good. It’s the Big Mac of soundtracks.

It took having the score blasted at me live throughout the movie for me to remember that there is a reason they’ve sold a billion Big Macs. The score for Sorcerer's Stone, particularly within the first half of the film, really is something magical to behold. I don’t think “Hedwig’s Theme” is ever going to replace “Luke and Leia” as the tune most people associate with Williams, but it is impossible to argue that it is an essential part in establishing the tone and mythology of the Wizarding World right from the start. A fan with a time-turner.
Photo by Katy Rouner
A stranger thing to me was that I have never really associated the symphony with audience participation. Cosplay, sure. Cosplay is my favorite part of Distant Worlds. It’s my chance to take pictures with Sake Kitty and catch up with her. But that’s all fun out in the lobby, not in the seats.

Harry Potter was different. The competition between Houses that occurs on the screen and the pages bleeds over into real life in a friendly way, and most fans know what House they would be in if the Houses existed. God knows I jumped at the opportunity to wear my Slytherin tie out in public. As the film progressed, and we were all emotionally augmented by the score slowing through us, it was a little amazing to find these spontaneous moments of fandom appreciation. “Better be Gryffindor” the Sorting Hat shouts, and a good chunk of the audience shouts right along back, perfectly mirroring the sentiment on the screen.

I wonder if it’s possible to truly appreciate something like Sorcerer’s Stone until it’s become the 16-year-old cultural artifact that it is. It’s not a movie. It’s not a soundtrack. It’s not even an adaptation. It’s an identity. It’s a thing you feel in ways that are very hard to describe but very easy to understand. Performing John Williams’s score live isn’t just a chance to experience the symphony. It’s a chance to dress up, and an excuse to plug back into something that made you extremely happy in a different way than maybe you ever have been before.

In doing so, you can come to love a composer like Williams more, and appreciate what he contributes to the world of music because you’re already so familiar with the world of fandom he helped build.