Sacred and Profane: Jesus Christ Superstar at Broadway at the Hobby 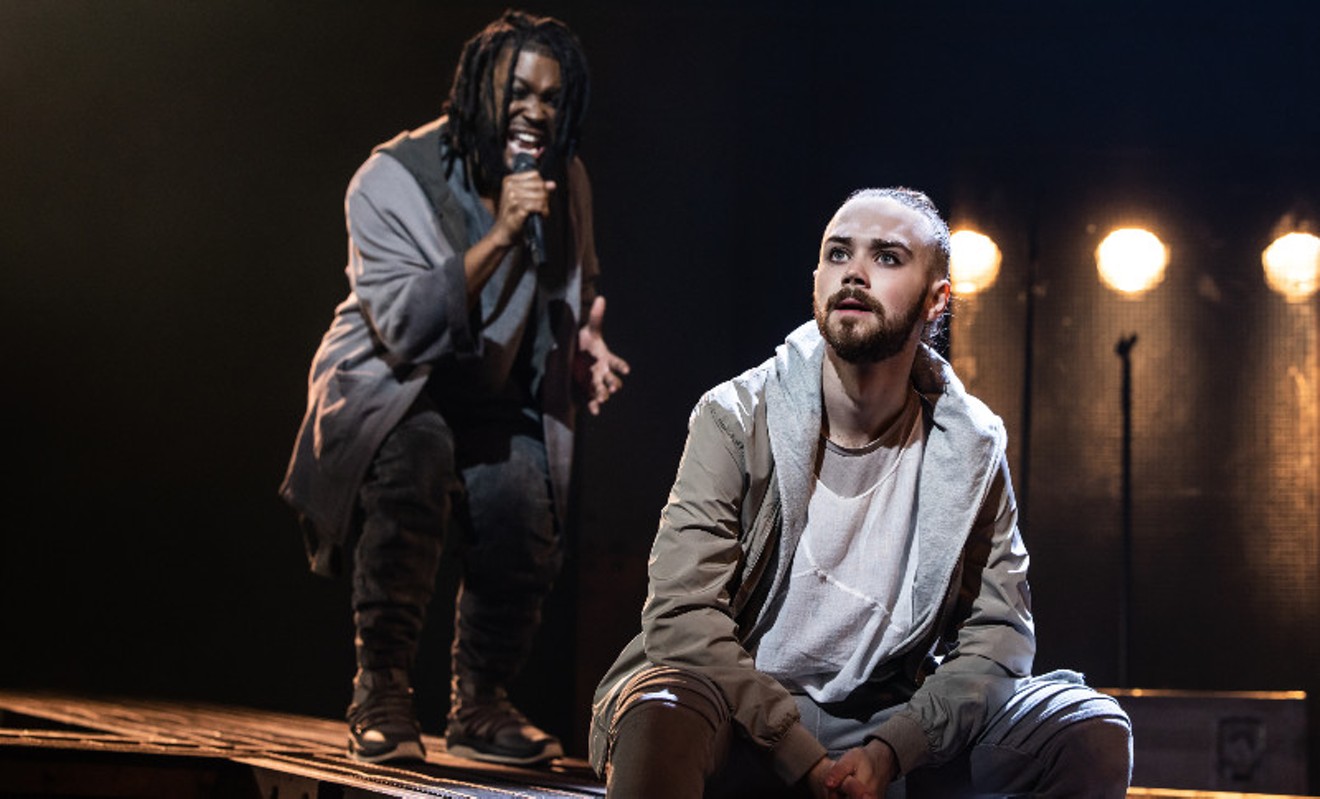 (L-R) Elvie Ellis as Judas and Jack Hopewell as Jesus in Jesus Christ Superstar. Photo by Evan Zimmerman for MurphyMade

The inevitable question one asks after seeing Andrew Lloyd Webber and Tim Rice's rock opera Jesus Christ Superstar (1971) is: how in hell will the singers survive the grueling national tour? Celebrating the musical's 50th anniversary – now 52nd , this iconic show continues throughout America until June 25. Will their voices make it?

The score is tough, riding the rails into the stratosphere or scraping the bottom of the scale. It's rock with a vengeance. The songs should shred even the most trained voices; but somehow, these young pros have survived, nay, thrived, under the pounding pressure that Sir Andrew lays on them. They're all rock stars.

Even with the surging pop sound from an accomplished quintet of two keyboards, bass, guitar and drums – amplified to 11 – there's no place to hide in this work. Jesus (Jack Hopewell), a willowy Christ figure in topknot and earring, dragging around his guitar like a modern cross, wails “The Temple” higher and higher, even higher, yet always screeches elegantly, never losing the melodic line.

Judas (Elvie Ellis) might not travel quite so high, but he's the musical's center and as such has, if possible, more drama in his songs, like “Damned for All Time” and “Judas' Death,” His raspy voice gets a workout; unfortunately, the lyrics get lost among the wails.

In love with Jesus, repentant former prostitute Mary Magdelene (Faith Jones) is given a softer palette in the classic “I Don't Know How to Love Him” and “Could We Start Again Please?,” the only song written especially for the stage when the original concept album morphed into a Broadway show. She basically has the ingenue role, and her creamy soprano is exactly right. She's a delight to hear.

Evil high priest Caiaphas (Isaac Ryckeghem) possesses a chasm-deep bass that Ezio Pinza would swoon over; Annas, a Pharisee (Kodiak Thompson) has a high tenor rock voice; Pilate (Nicholas Hambruch) growls menacingly, strutting in baritone; and apostle Peter (Colin Robertson) possesses the best voice, pure Broadway heft with a honeyed lilt. When he joins voices with Jones on “Could We Start,” Webber calms himself down and delivers a dreamy ballad.

The disappointment in all this high-volume singing is Herod (Erich W. Schleck), a sure-fire one-off, written to stop the show with its old-timey vaudeville tune and camp excess. The scene, enlivened by enough gold lame to wrap the Chrysler Building, lies limp on stage. Tame and reserved, it refuses to come alive. Herod, like in the gospels, is psychotic and expects Jesus to perform miracles for him – turn water into wine, “walk across my swimming pool” – he's mad...and Auntie Mame. Perhaps director Timothy Sheader decided Herod was too over-the-top for today's sensibilities and tamped him down. Whatever, the outré snap's gone out of him. Now, he's just a guy in a gold suit.

A re-staging of London's Olivier Award-winning 2016 Regent's Park Open Air Theatre production directed by Sheader and choreographed by Drew McOnie, Superstar is strikingly visual. Even steeped in hoodies and sweats (Tom Scutt), there are moments when the rich lighting (Lee Curran) and the staging surprises into an old master. Wonder as the Last Supper coalesces from grays into reds and blues with its own Rembrandt lighting. During Christ's anointing, the oil is poured out of vessels like sand – I think it was sand. When Jesus is whipped, each lash stroke is punctuated by glitter thrown on him until his bruised body is bedewed in a sparkling aura. Christ glows.

On a shallow stage space, what movement this production contains. It doesn't stop for the first half-hour. The ensemble zoombas right, then left, then circles, then expands, then compacts, intricately designed and danced to perfection. The choreography breathes, pants, wheezes, huffs and puffs in wild perpetual motion. Exercise as pictorial high dance.


Basically a rock concert on steroids, albeit the most exquisitely produced and performed rock concert in memory, Webber's opera is surprisingly faithful to the Bible. At times, using literal quotations from the Gospels when not talking in modern slang, Rice's libretto is clever in its simplicity and, ultimately, moving. Without Judas as the narrative's driving force, Rice implies, the “greatest story” wouldn't have happened nor been so glorious. Unknowing, treacherous Judas is responsible for all that has happened ever after.

None of this musical, obviously, would have seared into the world's consciousness without the sublime score by Webber. His rock still sounds fresh, new, and loud. It concusses. This is young music, pulsing then purring with a hint of gospel (there's a backup trio called the Soul Singers who do-wop upstage), some R&B, but always rock tinged with heavy metal. No wonder the blaring score startled the blue hairs. It's ageless, though, in its visceral appeal and emotional richness; classic in its structure and use of leitmotivs; wisps of cantatas amid the blazing guitar riffs. There are whispers of what's to come, a lushness that's Webber's signature, or a chord progression that recalls Evita or dissonances that evoke Phantom. This early example of his prodigality sounds like no one but Webber. It's quite an amazing sound. It's quite an amazing show.

If you haven't seen Superstar in years, this exciting and energetic anniversary production is the sine qua non. This show is the most worthy resurrection.

Jesus Christ Superstar continues through January 22 at 7:30 p.m. Tuesday through Thursday and Sunday; 6 p.m. Friday and Saturday; and 2 p.m. Saturday and Sunday. Hobby Center, 800 Bagby. For more information, call 800-982-2787 or visit thehobbycenter.org or broadwayatthehobbycenter.com. $35-$300.
KEEP THE HOUSTON PRESS FREE... Since we started the Houston Press, it has been defined as the free, independent voice of Houston, and we'd like to keep it that way. With local media under siege, it's more important than ever for us to rally support behind funding our local journalism. You can help by participating in our "I Support" program, allowing us to keep offering readers access to our incisive coverage of local news, food and culture with no paywalls.
Make a one-time donation today for as little as $1.