Poe, Artaud and Trump Collide in Catastrophic's Jim Lehrer and His Double

John Dunn and Seán Patrick Judge in Jim Lehrer and The Theater and Its Double and Jim Lehrer’s Double at Catastrophic Theatre. Photo by Anthony Rathbun
With 50-plus years in the news business under his belt, including anchoring PBS’ NewsHour and moderating 12 presidential debates, Jim Lehrer (the real one, not the one Mickle Maher has imagined in two plays) has had a front row seat to an impressive amount of American history – not that he’d offer an opinion on it. The straight news reporter once refused to answer a question on whether he thought then-presidential candidate Donald Trump had “flouted the unwritten protocols of running for office,” by stating, “I’m not a pundit. I report on what others say. I’m not going to analyze or give an opinion about Trump as a candidate, or Clinton as a candidate.”

It’s that singularly focused, dispassionate and opinion-less man that Maher latched onto, and one night after meeting the Lehrer of Maher’s imagination in The Strangerer, he returns once again to the Catastrophic stage for the kinda sequel, Gothic horror-comedy Jim Lehrer and the Theater and Its Double and Jim Lehrer’s Double. But this time, Maher’s Lehrer is on his own – almost.

It’s an unseasonably chilly summer night at the Lehrer residence, where the now-retired news man is alone in his small sitting room reporting on the news of his day. He’s an admittedly lonely man, tickled that the evening has brought him a chance to become part of a story for a change, as a woman going door-to-door has dropped off a poll about an upcoming village council election for him to complete. But Lehrer is soon distressed, realizing that he cannot answer the first – or, for that matter, second – question, which asks him to evaluate the truthfulness of the candidates. Lehrer is, and has been, primarily preoccupied with his own honesty, leaving him in no position to answer such questions about anyone else.

As he exits the sitting room, still pondering the poll, his “slender tether” to the outside world, Jim Lehrer II arrives home, clothes tattered and face dirt- and blood-streaked. Lehrer II is Lehrer’s double and a playwright, and the premiere of his first play has left him fleeing an angry mob of audience members. Lehrer II wants to secure the property, fearing that he’ll be followed home. Soon, however, he hears a thump in the night and begins to fear that it’s too late – something may already be inside the house.

Though both this play and The Strangerer offer timeless musings grounded in established philosophical discussions (Albert Camus in one and Antonin Artaud in the other), Jim Lehrer and His Double offers something noticeably more topical. Maher has said it was written during the 2016 election cycle (after Donald Trump won the Republican nomination, but before he won the presidency) and it shows – in the way Lehrer II speculates that the mood of the village council election season has affected his play’s reception; his description that all fears, lusts and cruelties suddenly became permissible and that people were “possessed” and “released from themselves” seeing his show; his observation about being confronted with the “things that you think you are not”; and also lines like, “I think both political parties are exactly the same, don’t you?” 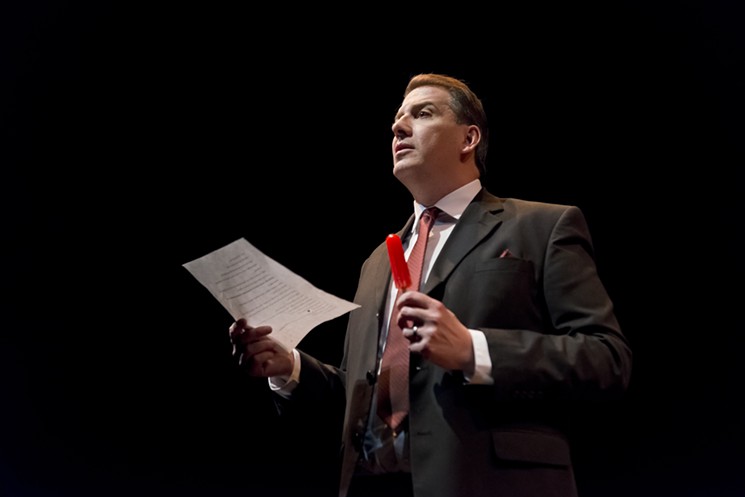 Seán Patrick Judge in Jim Lehrer and The Theater and Its Double and Jim Lehrer’s Double at Catastrophic Theatre.
Photo by Anthony Rathbun
More than that, elements like Lehrer’s inability to recognize a problem in his own house and the ultimate revelation that there’s an instigating infiltrator sowing seeds of discord for personal gain manage to underscore the point further, situating this play firmly in the Trump era. But that’s not why you should see this play; you should see this play because it’s legitimately spooky, laugh-out-loud funny, and thought-provoking with a chance of being – despite the view of theater one character has – “culturally consequential.”

Director Greg Dean helms this approximately 70-minute production, a single-setting two-hander, keeping it dynamic and well-paced. Dean’s set is deeply rich in color and without any over embellishment. A rug, two armchairs, a table and lamp furnish this small sitting room, the actors only teasing what labyrinth the stage’s black curtains hide behind them. Again, Shawn W. St. John’s sound design and Hudson Davis’s lighting really contribute to the show’s disconcerting feel, from off-stage singing and mystery thumps to the flickering lamp light.

Seán Patrick Judge returns as Lehrer, and the more time spent with him may be the show’s real treat. The juxtaposition of his dignified figure and demeanor with his ridiculous no-nonsense narration, sometimes about the consequence of eating a popsicle and sometimes a statement about how he got lost in his own home, adds to the character, which here is more tortured and wholly sympathetic. He and John Dunn (Lehrer II) work well together, and are both clearly on the same Jim Lehrer wavelength.

Dunn, though more disheveled and frazzled, is a Lehrer for sure, just one under duress. It’s Dunn who’s really responsible for selling the play’s horror elements and, between his palpable fear at venturing further into the house alone and his panicked frustration with Lehrer, does so quite well. Edgar Allan Poe, the most obvious antecedent for this aspect of the play, would be proud.

The real Jim Lehrer once told Stephen Colbert on a 2008 episode of The Colbert Report, “I have an obligation five nights a week to be serious and boring.” Maher has taken his “serious and boring” artifice, plopped a witty script on top and imbued it with some poignancy, making Catastrophic’s Lehrer-centric programming must-see theater once more.

Performances of Jim Lehrer and The Theater and Its Double and Jim Lehrer’s Double continue at 8 p.m. May 25 and June 2; 2:30 p.m. May 20 and May 27; and 8 p.m. June 2 at The MATCH, 3400 Main. For more information, call 713-521-4533 or visit catastrophictheatre.com or matchouston.org. Pay what you can; $40 suggested price.
KEEP THE HOUSTON PRESS FREE... Since we started the Houston Press, it has been defined as the free, independent voice of Houston, and we'd like to keep it that way. With local media under siege, it's more important than ever for us to rally support behind funding our local journalism. You can help by participating in our "I Support" program, allowing us to keep offering readers access to our incisive coverage of local news, food and culture with no paywalls.
Make a one-time donation today for as little as $1.