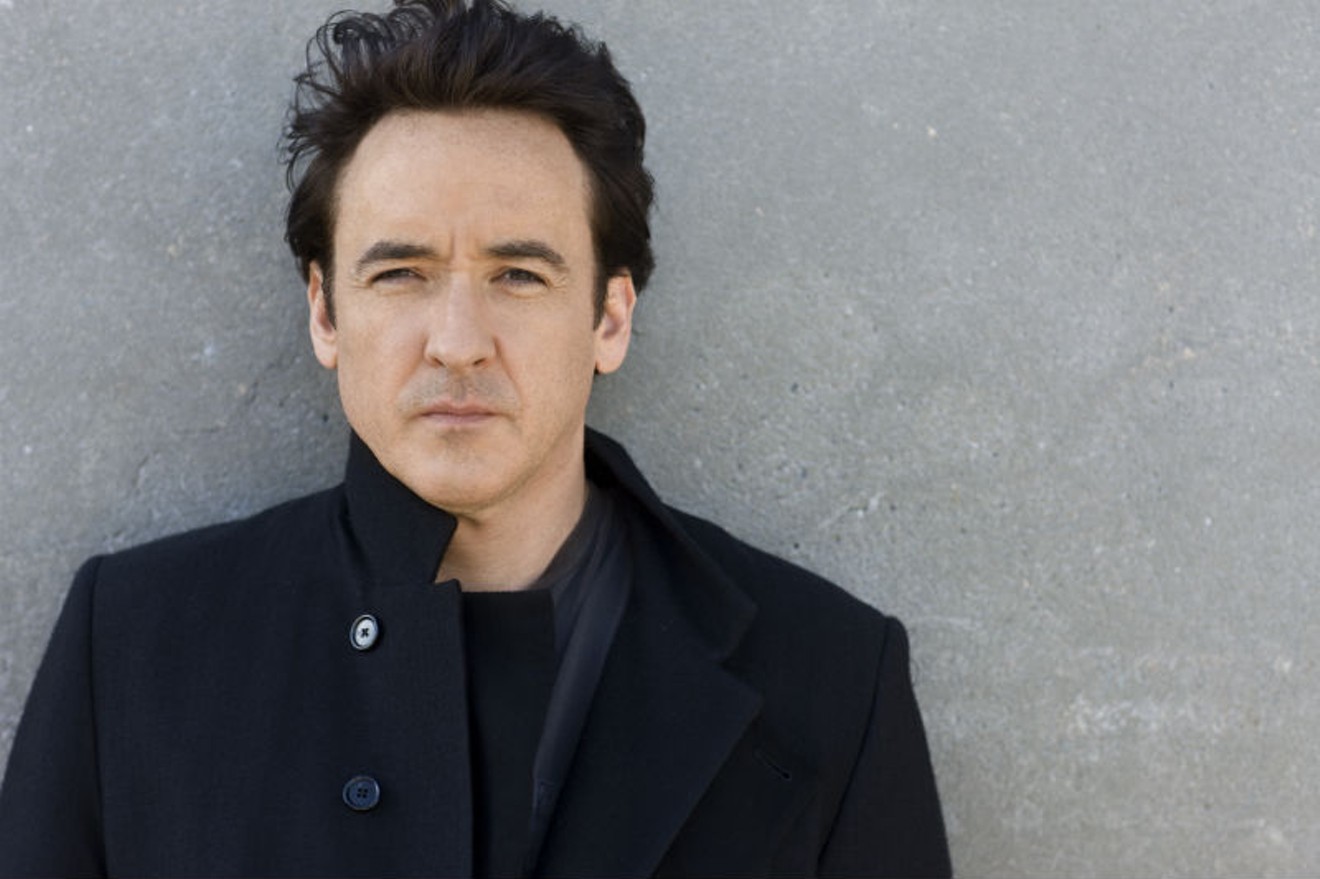 A Houston audience filled Jones Hall yesterday for an anniversary screening of John Cusack’s breakout film, Say Anything, and then to engage in some Q&A with the veteran actor. A female audience member (one of many who professed childhood or ongoing crushes on the film star) asked him a question that touched on how relationships have changed in the 30 years that have passed since the film, considered one of the great modern romance movies, debuted.

“If this movie was made today,” she asked, “would Lloyd Dobler be sending Diane Court a bunch of crazy text messages like, ‘I miss you,’ or would he respect her boundaries?”

The audience cheered and elsewhere in the three-hour presentation Cusack explained how he and the film’s director, Cameron Crowe, worked hard to distinguish the protagonist’s genuine affection versus something resembling stalking, particularly during the film’s iconic “boombox” scene. Answering the audience member, Cusack said, “I don’t know man. I don’t think you can do it in text. I don’t think you can hold the iPhone above the head. It’s not gonna happen. It’s gotta be analog. You’ve gotta have soul, man.”

Cusack’s throngs of admirers think he has soul. He’s built a dedicated following from his recent work as a political activist and a long, successful career in film. He spoke on fan favorites like Con Air, High Fidelity, Being John Malkovich, 1408, The Jack Bull, The Grifters, Better Off Dead, and War, Inc. He guessed Grosse Pointe Blank might be his favorite John Cusack film if he had to choose one, because he was in on the screenplay, enjoyed working with his co-stars and it was a quality black comedy.

“I would see like Ronald Reagan and all these people who wanted to do war and I thought they must not think of themselves as killers and stuff,” he said, and noted he wondered how they lived with the knowledge that their acts resulted in deaths of others. That notion sparked some inspiration.

“They must just think what they do isn’t who you are, but of course what you do is who you are, in some ways,” he said. “I was just interested in that comedic idea. So I thought it could be funny if you have an assassin who’s having an existential crisis. He never knows why he’s depressed and his shrink is telling him it’s because you kill people.”

The address covered all sorts of ground. He spoke on his work with Freedom of the Press Foundation, which allows him to work with Edward Snowden and Daniel Ellsberg, two of America’s famed whistleblowers, to protect press freedoms, and said advocacy allows people to be “engaged in something outside of your own ego.” He was asked about his sister, the actress Joan Cusack, also a beloved American film figure. He said he’s tried to convince her to hit the road with him for events like these because fans ask about her as often as they ask about his own work.

“Everybody knows she’s the best,” he summarized. “She wins. She’s funnier than anybody I’ve ever met.”

The discussion flowed easily thanks to moderator Ernie Manouse. The multiple Emmy winner and veteran interviewer, host of InnerVIEWS with Ernie Manouse and the Downton Abbey recap show Manor of Speaking, ensured the night kept one foot in movie land and one in the real world. He asked Cusack, who started his career around the Brat Pack era, how he managed to forge his own singular career.

“I think it was probably just a little bit of luck and then also just, again, I was never that impressed with celebrity or being in the VIP circle, wherever that was supposed to be,” Cusack reflected. “If I thought a movie was good or a script was good, that’s what I thought. I didn’t think it was good just because other people did, it didn’t change my mind. I was kind of stubborn that way.”

He said that stubbornness served him well, whether it was choosing roles or adding music to his films, a practice he’s engaged in to great success, one which has allowed him to work with artists like Bob Dylan and the late Joe Strummer.

Cusack said today’s film industry shows some promising signs. He said filmmakers imbued with a punk rock, DIY ethos are free to film interesting work and he mentioned the 2015 German crime thriller Victoria, which is filmed in a single, continuous shot. But there are some things that haven’t changed and might even be trending downward about the industry. 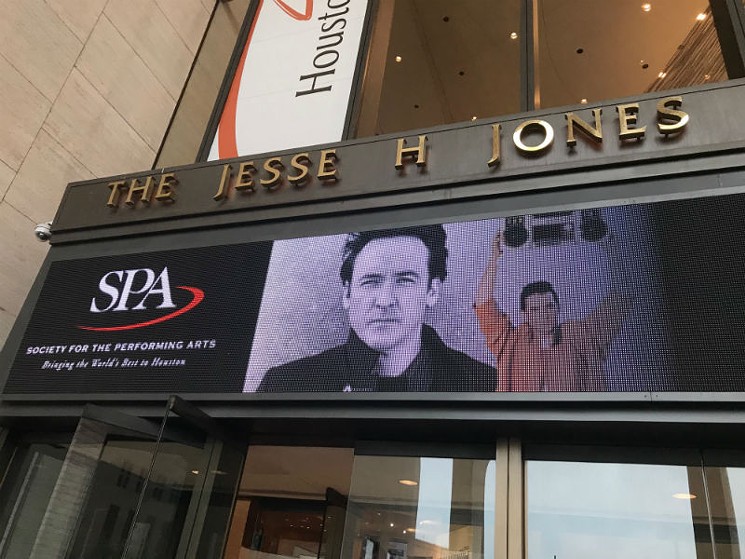 Cusack visited Houston to screen Say Anything and discuss the 30 year-old film and his career
Photo by Jesse Sendejas Jr.

“Hollywood does what it wants because it has a bunch of lawyers and a bunch of money,” he said before mentioning a TV series based on High Fidelity and distancing himself from the project.

He said one change is that people now watch movies in isolation, on computer screens and while sitting on their sofas.

“I think there’s something about getting people together in a room that makes it a little magic,” he said.

Though he spoke at length about his other films, the night belonged to Say Anything, a film he wanted to do because “It reminded me more of a JD Salinger book than a John Hughes movie.” He said he’s happy the film still has an adoring audience all these years later.

“I guess it became kind of a cult movie,” he said. “Good cult, not bad cult. Not Jim Jones cult. Memorable cult.”

Manouse told Cusack that Premiere Magazine once ranked Lloyd Dobler, the character he portrays in the film, among the 100 greatest film characters of all time. Cusack was asked how much of himself is in any role and he admits there’s always some piece there.

“I worked on the character with Cameron because I thought he was optimistic but didn’t have a worldview enough for me,” he said. “Even then music was really important to me as an 18, 20 year-old. So that’s when I said he’s gotta be into The Clash and Fishbone, he’s gotta be into all this stuff.”

Dobler might be interesting because he’s a little more complex than the average teen film hero. Cusack might be interesting because he's a little more complex than the average film star. To build that character, Cusack said “It has to be like what makes the Beatles great – the Beatles are great because the songwriters. Paul McCartney sang, ‘You have to admit, it’s getting better, it’s getting better all the time,’ and then John Lennon would say, ‘It can’t get no worse.’”

“It’s not like he’s an optimistic dude who doesn’t know the score," he said of Dobler (and maybe himself). "He’s an optimistic dude who even though he knows the score, he’s still gonna be in a good mood.”
KEEP THE HOUSTON PRESS FREE... Since we started the Houston Press, it has been defined as the free, independent voice of Houston, and we'd like to keep it that way. With local media under siege, it's more important than ever for us to rally support behind funding our local journalism. You can help by participating in our "I Support" program, allowing us to keep offering readers access to our incisive coverage of local news, food and culture with no paywalls.
Make a one-time donation today for as little as $1.