Lend Me a Soprano: An Audience Pleaser That Has Its Special Moments 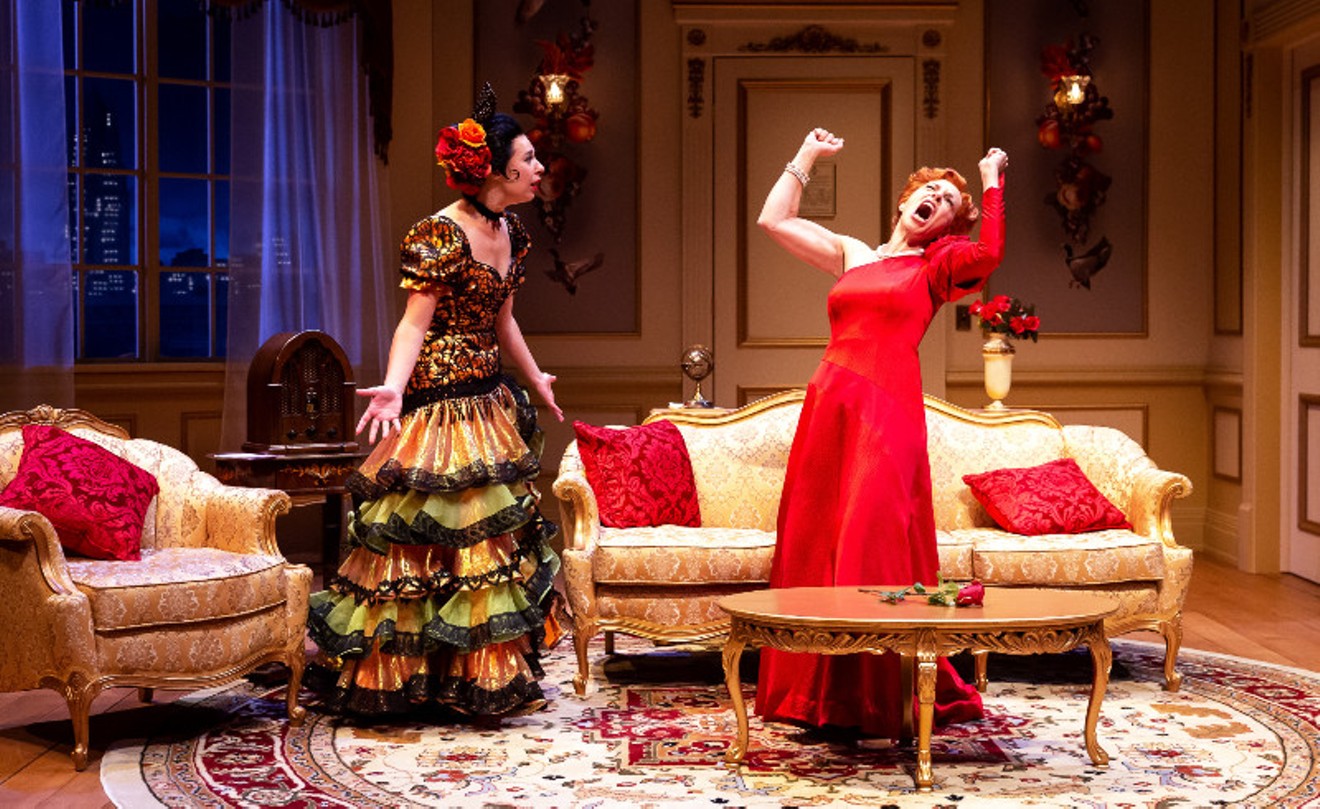 Mia Pinero as Jo and Ellen Harvey as Mrs. Wylie in Alley Theatre's production of Ken Ludwig's Lend Me a Soprano. Photo by Lynn Lane
While I was furiously paddling upstream, the Alley Theatre audience during Ken Ludwig's world premiere, Lend Me A Soprano, was merrily floating downstream, laughing uproariously. If one looked out at the audience from the stage, you'd have seen me sitting there, smiling once in a while but basically immune to the farce exploding in front of me. At a certain point, and I'm not quite sure when it happened, I stopped fighting the current, turned my inner tube around and joined the others. I didn't smile any broader or more often, but why fight it, go with the flow.

Soprano is Ludwig's distaff update to his hit money-maker Lend Me a Tenor (1989), his first Broadway endeavor and multiple Tony-winner for Best Actor (Philip Bosco) and Direction (Jerry Zaks). Ludwig was nominated as playwright but lost to Wendy Wasserstein for The Heidi Chronicles. His Gershwin-infused musical Crazy for You (1992), a blockbuster that ran for four years, won Best Musical, Costumes (William Ivey Long) and Choreography (Susan Stroman), but lost Best Book to William Finn and James Lapine's Falsettos.

Nevertheless, Ludwig's had a most profitable career and has written numerous comedies that play continuously around the world (Moon Over Buffalo, Twentieth Century, Shakespeare in Hollywood), and some that have premiered at the Alley (Leading Ladies, Be My Baby, Treasure Island, The Gershwin's An American in Paris) but have not had such a successful shelf life.

Surprisingly, Soprano is much more adroit than Tenor. Turning the three leading male roles into women overlays this pinwheel comedy with a warmer, deeper touch. It's still a classic sex comedy with whiplash timing, men dropping their pants, doors slamming, mistaken identity, and surprise entrances, but the lead women add a lively touch to the finely-plotted machinations. Somehow this farce has found its heart. It's a sweet transformation.

Ludwig explained in an interview with the Alley's Literary Manager in Playbill, “A lot of my work over the years has been recognizing that the Western canon of drama is so male-centric...but just because it's been that way in the past doesn't mean we can't and shouldn't work to redress that balance.”

The gods know women can be just as funny as men. Slapstick knows no gender. And the Alley's fabulous cast, under Eleanor Holdridge's laser-like direction – she knows exactly when and how to slam a door – sparkles with camaraderie. Lean in, you might say, just don't let that door slam you in the ass. The women don't. They nimbly move out of the way.

Italian superstar diva Elena Firenzi (Alexandra Silber, dripping handsomeness) is late for her appearance in Cleveland to sing Carmen at the opera. Theater manager Mrs. Wylie (Ellen Harvey, dripping with the wicked timing of her bon mots) is on the verge of a nervous breakdown. Assistant Jo (Mia Pinero, dripping shyness), an amateur singer, loves Wiley's son Jerry (Brandon Hearnsberger), who's in no hurry to get married. Firenzi, known for her offstage flings, arrives with hothead suspicious husband Pasquale (Orlando Arriaga, dripping Italianate volcanism like Vesuvius). To calm her nervous stomach, Elena proceeds to get drunk, passes out on downers, and is pronounced dead. Who can go on in her place?

Ludwig's plot spins into overdrive like Feydeau on steroids. Near the finale, there are two Elenas racing around the hotel suite, two suitors after both of them (Jerry and hunky clueless Dutch tenor Leo [Steven Good]), a fan-mad bellhop (Skyler Sinclair), and a grand dame Guild chairwoman Julia (Susan Koozin, dripping Margaret Dumont), who arrives in a silver lame gown and tiara, who's told she looks like the Chrysler Building. That gets a big laugh, but it's a gag stolen straight from Mel Brooks' The Producers.

Maybe that's why I'm a bit cool toward Ludwig's brand of farce. He goes low when he should go high. A lot of Soprano, just like Tenor, plays like a Carol Burnett skit. The jokes can be hoary. Champagne is ordered. “Is Mumm alright?” “She's fine,” is the reply.

But there's one moment that does go high; it's so amazing that it stands out in bas relief. Elena teaches Jo how to project, how to be in the moment, how to find the art in singing. Both Silber and Pinero sing a duet – what piece it is I couldn't recognize – but it stops the show. Jorge Arroyo's lighting dims slightly, and the two actors push this comedy into another realm. It's a moment of complete surprise, a bit of theatrical beauty and magic. The actors are magnificent singers, both veterans of Broadway. The audience was held absolutely spellbound. When the duet ended, everyone burst out in a great wave of appreciative applause. Like when Harpo played his harp in a Marx Brothers movie, it was disconcerting but, oh, so right.

The Alley production, like something out of golden age MGM, is glamorous in the extreme with a hotel suite designed by Klara Zieglerova that is plush in red, gold, and cream – did any hotel suite in Cleveland ever look so delicious? – with five solid doors to slam. The kitchen door swings, which means it's not often used. There's no farce in a door that doesn't make noise. Helen Huang's finely-detailed costumes bespeak the '30s – Julia's Chrysler Building gown could have been worn by Carole Lombard. But look at those shoes, Pasquale's large-patterned plaid suit, Leo's satiny shirt (which doesn't stay on him for long), or the seamed silk stockings – wonderful.

Ludwig could be our contemporary Neil Simon: breezy, clever, mechanical. He knows how to get a laugh, when to stage a blackout, when to surprise, when to land a gag, even when it's not appropriate for the character to say it. Lend Me a Soprano is an undeniable crowd-pleaser. I can marvel at its cleverness and razor-timing, but I don't have to laugh out loud, do I?

Lend Me A Soprano continues through October 9 at 7:30 p.m. Tuesdays through Thursdays and Sundays, 8 p.m. Fridays and Saturdays, and 2:30 p.m. Saturdays and Sundays at the Alley Theatre, 615 Texas. For more information, call 713-220-5700 or visit alleytheatre.org. $26-$78.
KEEP THE HOUSTON PRESS FREE... Since we started the Houston Press, it has been defined as the free, independent voice of Houston, and we'd like to keep it that way. With local media under siege, it's more important than ever for us to rally support behind funding our local journalism. You can help by participating in our "I Support" program, allowing us to keep offering readers access to our incisive coverage of local news, food and culture with no paywalls.
Make a one-time donation today for as little as $1.