Where Is The Fun In Little Shop of Horrors 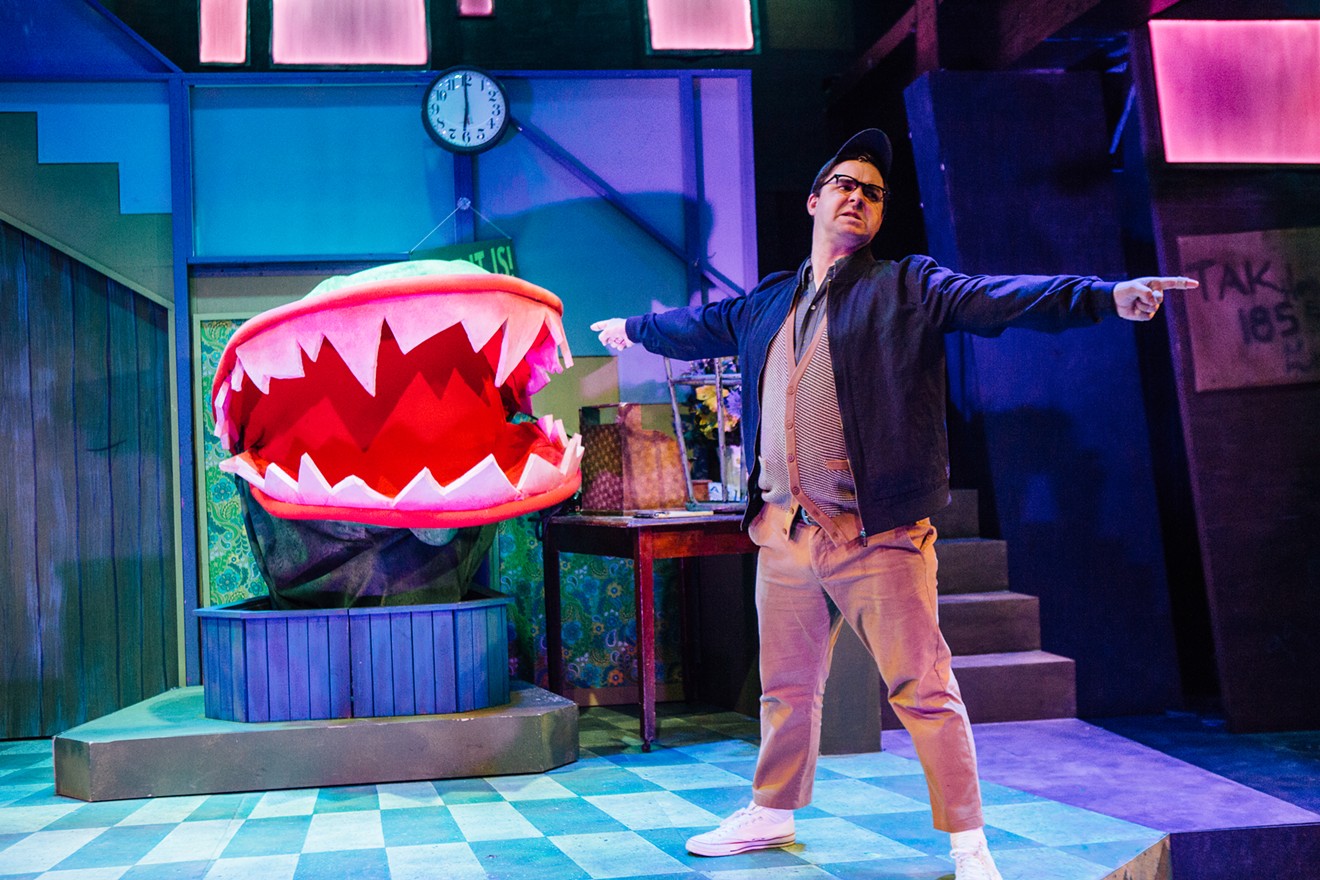 Stoo and Mark Ivy in Stages Repertory Theatre ’s production of Little Shop of Horrors. Photo by Os Galindo
It’s quite possible that Little Shop of Horrors (music by Alan Menken and lyrics and book by Howard Ashman) is the most universally lovable musical ever created. The kind of show everyone can adore based on their own personal tastes.

Fancy a sci-fi/fantasy story? Little Shop features Audrey II, an alien plant mysteriously come to Earth after a solar eclipse. Horror fan? That plant eats live human flesh. Is outrageous comedy what you’re after? How about a sadist who becomes a dentist as your punch line? Like '60s era music or funky Motown beats or maybe straight ahead sweet ballads? Check, check and check. Perhaps most cleverly, whether it’s a tragic love story, moral quandary or cautionary tale you crave, Little Shop of Horrors can deliver.

The musical follows Seymour, a nerdy skid row flower shop employee who finds and cultivates a never before seen unusual plant, which he affectionately names after his co-worker and secret crush, Audrey. Audrey II grows, but only if Seymour feeds its lust for blood, a task he agrees to do in return for the fame, fortune and love the plant has promised him. But soon Seymour realizes that his greed won’t only be his undoing, but perhaps the undoing of the whole human race.

More family friendly than The Rocky Horror Picture Show, not as gritty as Hedwig and the Angry Inch, less murderous than Evil Dead The Musical, way weirder than Disney productions and with a killer songbook that will make you shun any jukebox musical for its lack of creativity, Little Shop has been giving a wide swath of audiences B movie  laughs since it first premiered Off-Off-Broadway in 1982.

So why then is the show, now onstage at Stages Repertory Theatre, not giving us the same ear to ear smiles we remember? Why may someone seeing it for the very first time not necessarily get why exactly Little Shop has such a place in our hearts? It’s not like the production, here directed by Mitchell Greco, doesn’t have all the required elements, many of them quite good. There are splendid voices and creative costumes (Katherine Snider) and of great importance, a series of well-constructed and ever-growing Audrey II’s.

But where's the fun onstage? Greco’s cast sails neatly from one iconic number to the next but there seems to be no real joy in their efforts. No over the top campiness. No sense that this is a cast reveling in the experience and wanting to take us along for the ride.

This lack of fizz is most notable with Seymour, played by Mark Ivy, a talent who’s received a plethora of well-deserved hosannas in these pages. Capable of both grand physical and emotive humor, here Ivy seems hamstrung and hesitant, never really leaning into to his or his pining for Audrey. It isn’t until the second act, during the duet, Suddenly Seymour, that Ivy loosens up and together with sweet-voiced Kiaya Scott as Audrey, finally delivers some much needed oomphy emotion that the audience can cheer for.

As Audrey, Scott fares a bit better. She certainly teeters around effectively in slinky clothes and skyscraper heels and occasionally uses her put on Nuyawk accent to effective comedic timing. But even though her angel voice can’t help but soothe us as we listen to her dream of a better life in Somewhere That’s Green, we can’t shake the feeling that she’s going from number to number. Even looking past this, it’s hard to ignore her constant gaze in the distance and extended hand that seems to pass for acting while singing. For heaven’s sake, let the woman move about and draw us in with her both her voice and her physical emotions.

With the leads falling short to various degrees, we look to the rest cast to keep the energy up, and of the six supporting performers, only one seems truly up to the task.

As shop owner, the ever kvetching Mr. Mushnik, Jimmy F. Phillips either rushes his shtick or isn’t over the top enough to register. The show’s Greek chorus, comprised of three skid row street urchins styled as a '60s girl group (Raven Justine Troup, Tamarah Nicole Tucker Anna Maria Morris) bring vocal depth to many of the numbers, but too many out of synch choreography gaffes make them seem unpolished. As the voice of Audrey II, Phillip Brown may have done a spectacular job, but a muddy sound system meant we couldn’t hear much of what he had to say.

That leaves Blake Jackson, the chameleon in the show, responsible for a multitude of roles including Orin, the pain inflicting dentist. Whatever unfortunate chill pill the rest of the cast was on, it seems no one gave the memo to Jackson. No matter what character or which scene, Jackson attacked each one like his life depended on it. Frenetic, outrageous, all in, Jackson brought the energy and silly shlock commitment the rest of the show was lacking.

That we still walk out of this production humming numbers happily to ourselves is a testament to Menken and Ashman’s ridiculously brilliant ideas. That we had a good enough time in the thick of the production goes to the decisions Greco and his cast got right.

But the internet is available for all of us. And if anyone else went home and Googled the various Little Shop numbers to truly feel like they saw what they wanted to see, well then, did we really have a good time or was it just a tease for what we really wanted and expected?

Little Shop of Horrors continues through April 28 at Stages Repertory Theatre, 3201 Allen Parkway. For information, call 713-527-0123 or visit stagestheatre.com. $25 to $99.
KEEP THE HOUSTON PRESS FREE... Since we started the Houston Press, it has been defined as the free, independent voice of Houston, and we'd like to keep it that way. With local media under siege, it's more important than ever for us to rally support behind funding our local journalism. You can help by participating in our "I Support" program, allowing us to keep offering readers access to our incisive coverage of local news, food and culture with no paywalls.
Make a one-time donation today for as little as $1.