Reviews For The Easily Distracted:
Men In Black: International 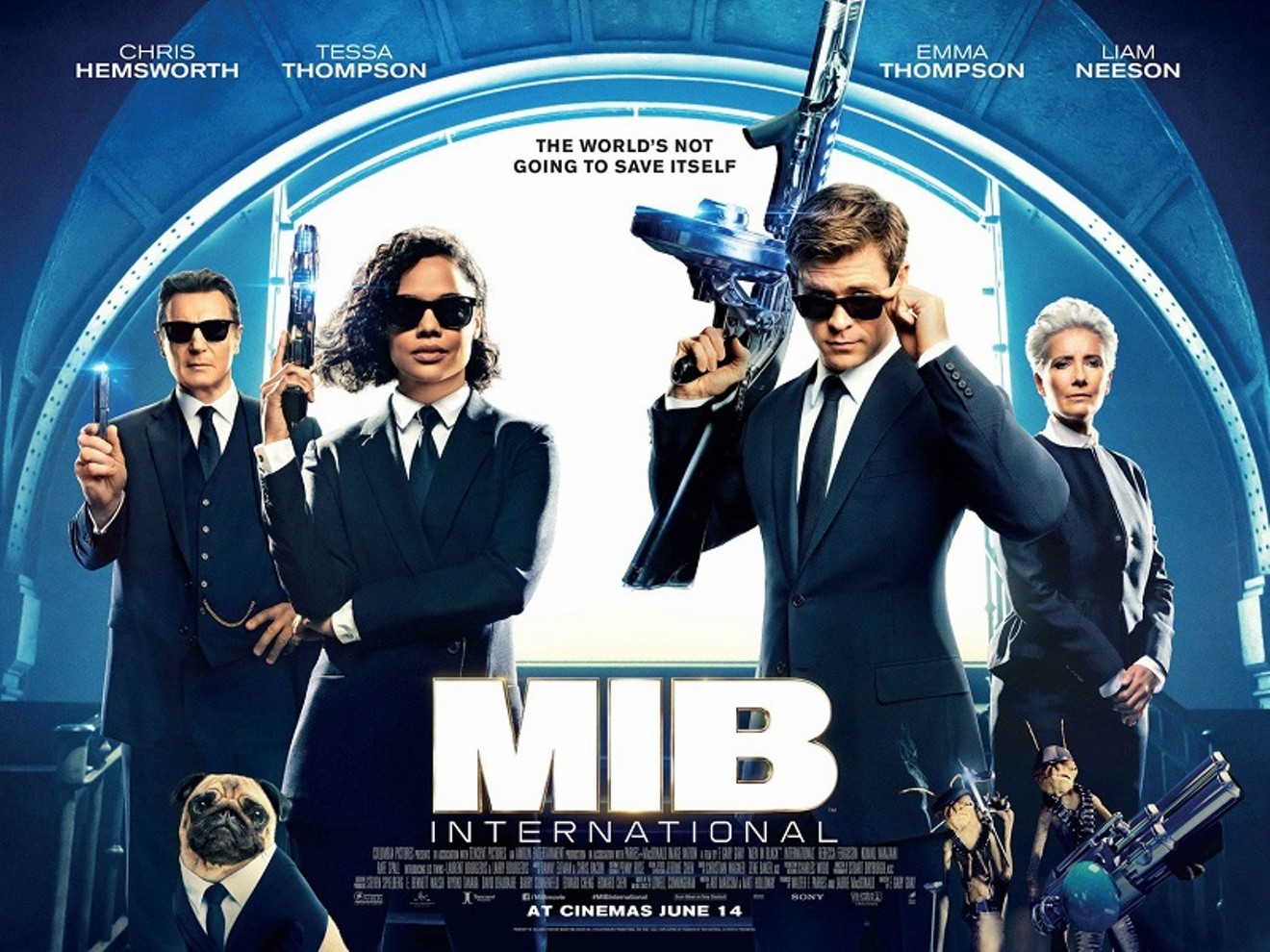 Describe This Movie In One Plan 9 From Outer Space Quote:

CRISWELL: Perhaps on your way home you will pass someone in the dark, and you will never know it, for they will be from outer space.

Rating Using Random Objects Relevant To The Film: 2 Alex Trebeks out of 5.

20th Television
Tagline: "The world's not going to save itself."

Better Tagline: "In space, no one can hear you yawn."

Not So Brief Plot Synopsis: A childhood encounter with a mysterious (space) alien-monitoring organization compels a young Molly (Tessa Thompson) to dedicate her life to cracking their ranks. Her diligence pays off when she tracks down an alien in Brooklyn, leading to her recruitment into the Men in Black by Agent O (Emma Thompson). Her first mission: join the London bureau and report to High T (Liam Neeson), which leads to her partnering up with legendary Agent H (Chris Hemsworth) and working to uncover a possible mole in the MIB's midst.


"Critical" Analysis: It's not surprising to see a relaunch of the Men in Black franchise coming seven years after the last installment. All three of the previous movies were commercial successes, with MIB3 alone grossing over $600 million. It's a solid brand, so the real puzzler is why director F. Gary Gray and company have given us an end product so listless and half-assed.

Men in Black: International is the first of the franchise not helmed by Barry Sonnenfeld, though his imprint isn't completely erased. The look of the various bureaus remains consistent from earlier films, and Gray brings his action sensibilities to the table, along with a club scene clearly inspired by his early music videos.

It's also the first of these without Will Smith or Tommy Lee Jones (though they're briefly referenced), and their absence is more keenly felt. Not in the sense of missing their actual characters, but in the back and forth between the two, because that sort of chemistry is mystifyingly absent here.

It's baffling that Thompson and Hemsworth, who played off each other so marvelously in Thor: Ragnarok, interact with such leaden indifference. The script does a poor job differentiating between M's ambition as a reason for latching onto H and her later apparent attraction to him, and Hemsworth sleepwalks through an admittedly lazy character arc that never bothers to get serious about whether H really is a traitor.

Worse than any of that is Kumail Nanjiani's alien sidekick character. "Poochie" ... sorry, "Pawny" has a handful of good lines (your kids will doubtless love him), and Nanjiani gives it his all, but he is otherwise the worst sort of pointless, catchphrase-spouting adjunct you can imagine. He's the Bat-Mite of Cousin Olivers, and the decision to give him more than a handful of scenes is nigh disastrous.

The high points are few and far between. Rafe Spall elevates Agent C from what could easily have been a Water Peck-type asshole into an actual character, and Rebecca Ferguson's alien arms dealer is fun for the ten minutes she's on screen. Some of the alien designs are truly inspired, and it's hard not to notice how far the effects have come since the early days of the series.

Though probably the most unbelievable thing — in a movie about alien exoduses and extra-dimensional travel — is the idea that a dozen Amazon boxes could sit unmolested on a Marrakesh street for several days.

But the movie's worst crime might be wasting Emma Thompson. It's not that difficult, people: Agent O was already introduced in MIB3, and could easily have been made head of the London branch instead of Neeson's "High T" (groan). Thompson is doing the best work in this movie by light years, and underutilizing her should get Gray a reprimand from the Directors Guild.

And Frank the Pug barely gets a cameo. It's an outrage.

It's a disappointing misfire, especially given how well we know how capable the two leads are of working well together. If there's a truth that really is out there, it's that Men in Black: International is not very good.

Ask A 9-Year Old:
RFTED: Do you think aliens exist?
9YO: Of course.
RFTED: Why "of course?"
9YO: Because we've only explored, like, one-fourth of the universe.
KEEP THE HOUSTON PRESS FREE... Since we started the Houston Press, it has been defined as the free, independent voice of Houston, and we'd like to keep it that way. With local media under siege, it's more important than ever for us to rally support behind funding our local journalism. You can help by participating in our "I Support" program, allowing us to keep offering readers access to our incisive coverage of local news, food and culture with no paywalls.
Make a one-time donation today for as little as $1.