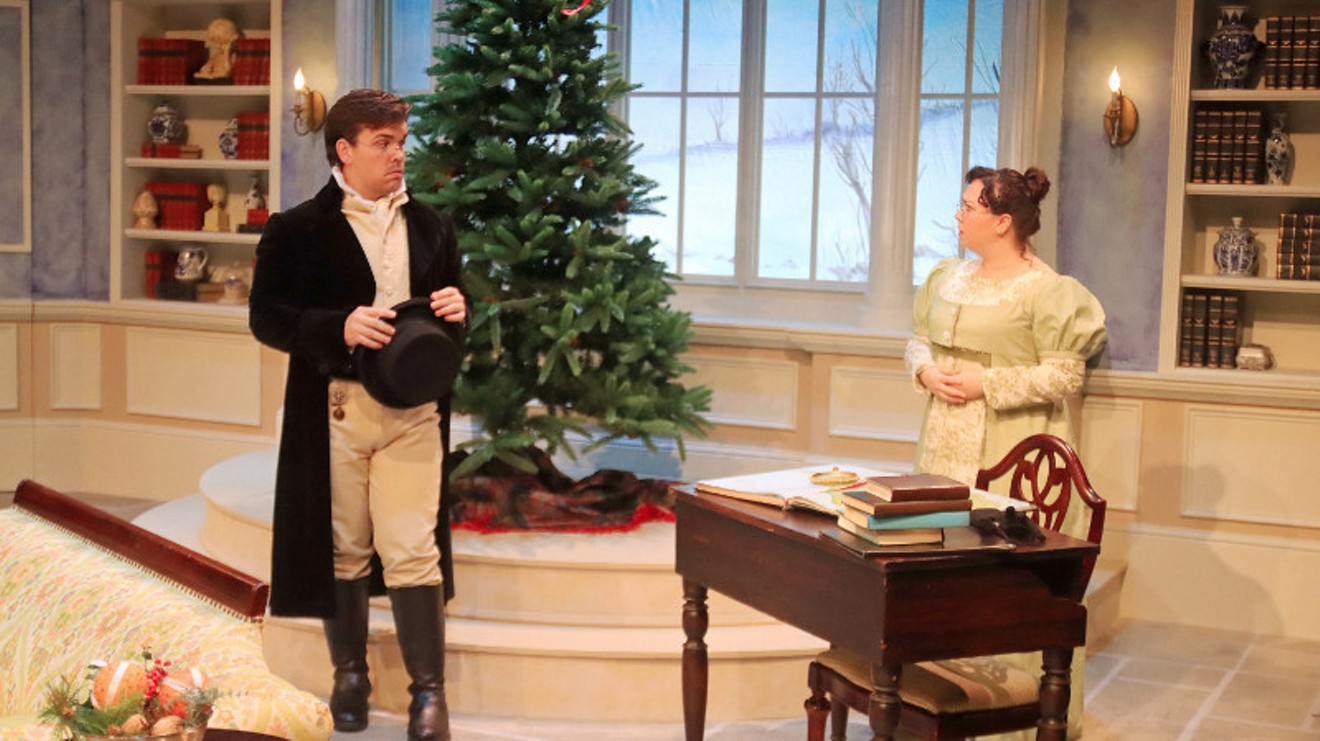 Egad, who spiked the punch at the Darcys?

For past holiday seasons, Main Street Theater has presented Lauren Gunderson and Margot Melcon's sequels of sorts to Jane Austen's immortal Pride and Prejudice: Miss Bennet and The Wickhams, both subtitled Christmas at Pemberly. I believe it produced Bennet three times, one being a virtual read-through last Christmas during COVID, when the theaters were shuttered.

Bennet is back on stage in the flesh, and it's been revivified, botoxed, and lightened. It was always a deft comedy of manners, a Regency-era charmer that leans in toward the distaff, but I don't remember it with such easy wit and gliding gait. Never underestimate the power of a director's vision, a sly rearrangement of actors, some new faces, and a new costume design by Donna Southern Schmidt. The script's untouched and the set is still Ryan McGettigan's handsome manse library with its divan, pianoforte, arched windows, robin's egg blue walls, and Constable-esque paintings framing the bookshelves, but the entire mood seems gayer and more fresh. The actors are having more fun.

Under director Robin Robinson, who journeys for Main Street's children division and directed The Wickhams in its first main-stage appearance, Bennet shows more cheekiness and is less staid. We're having more fun, too.

Chaney Moore returns as Mary, the middle unmarried Bennet daughter. Unmarried is the crux, of course, for daughters did not inherit in the Regency era. That's why Mrs. Bennet in P&P is giddy with anxiety to get her five daughters married posthaste. Mary struts to her own drum, is the intellect in the family and is resigned to be single, though she longs for romance. She observes her family with magnifying glass clarity, none more so than herself. Moore grounds her character with fierce pride. Her sisters call her “underspiced,” but we know warmth lurks under the surface. When she's cornered, she marches to the pianoforte and blurts out a Beethoven transcription. “You're upset,” they say shocked. “I'm not upset, she replies with retort, “Beethoven's upset.”

Gunderson and Melcon sprinkle their comedy with such repartee and bon mots, a la Austen, and the literate dialogue – much tempest in a drawing room – holds this play together. When Darcy's cousin Arthur (Aaron Alford) arrives unannounced in escape from imperious Anne de Bourgh (Lindsay Ehrhardt), and recognizes the looming Christmas tree as a spruce, not a fir, as did Mary earlier, we instinctively know they are destined for each other. Lindsay Ehrhardt as Anne de Bourgh
Photo by Pin Lim
The play is basically over in the middle of Act I, so the authors throw meringue roadblocks at the couple. The best one is Anne herself, who barges into the house with commanding hauteur that kick starts the plot anew. Fortunately, Anne is embodied by Ehrhardt with a imperious crust of noblesse oblige that is limed to perfection. She can't look down at the parvenus below her because she holds her nose so high. She's the villain you love to hate.

B. Connor Flynn, memorable as materialistic Spike in Tom Stoppard's The Hard Problem, produced by Main Street in 2019, is a dashing Darcy in his red velvet coat and riding boots, but except for some wayward words of encouragement to naive Arthur, he doesn't have much to do. To be fair, no one has much to do except gently mock Mary at the beginning, then come around and wheedle her into the arms of the suitor standing next to her. “We're gentlemen,” Darcy pronounces to Gabriel Regojo's Charles, husband of Jane (Yemi Otulana), “we sit around and wait for excitement to come to us.” He's been studying Gunderson and Melcon.

Skyler Sinclair, a former flirty Lydia, now is the lady of the house, Elizabeth. She exudes competence, wit, a piquant sexuality, and it's easy to see how she snared snooty Darcy and knocked him down a peg.
Lydia has a more complete role, and Alexandra Szeto-Joe runs with her: a perpetual mobile of winking eyes, gestures, and good-time girl. We know there are secrets she's hiding, but they will out in a most pleasant denouement. This is mini-Austen, not Poe.

The cast meshes well and creates a lovely fairy-tale atmosphere. Austen is well served all round. There will be no re-gifting this year. Now, may I have a glass of that punch?

Miss Bennet, Christmas at Pemberly continues through December 19 at 7:30 p.m. Thursdays through Saturdays and 3 p.m. Sundays except for Thanksgiving week when there will be a Wednesday but no Thursday show. Main Street Theater, Rice Village, 2540 Times Boulevard. Masks are required as well as a vaccination card or proof of a negative COVID-19 test within 48 hours. For more information, call 713-524-6706 or visit mainstreettheater.com. Main Street will also be streaming the production beginning the first week in December. $36-$55. 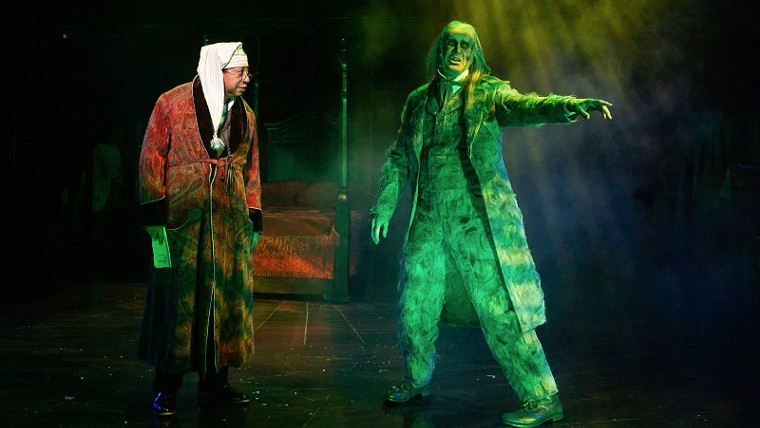 The Alley Theatre's holiday cash cow, Dickens' evergreen A Christmas Carol, has also gotten itself a makeover. And like Bennet at Main Street, it's more spritely than ever. There's much authentic Dickens to savor, enlivened by a zip-drive version of the classic tale that punches up the humor, eliminates those ghastly dancing ghosts, the drag housekeeper, and other extraneous directorial touches that plagued the Michael Wilson production, and washes the show with a modern sly wink.

This is a staged version of their virtual production that screened during COVID last holiday season, adapted by Doris Baizley. Next year, we're told, artistic director Rob Melrose will premiere his version of Carol.

What I like about this one is its fleetness and economy. Director Brandon Weinbrenner has a lightness of touch that well serves old Charles. We begin backstage as a local theater company prepares its production.

The stage manager (David Rainey) is harried and flinty, as prop boy (Juan Sebastián Cruz) scurries about to discover there's no chain for Marley (Todd Waite) and, worse, no Scrooge or Tiny Tim. They can't disappoint the audience, so the theater troupe wrangle the stage manager and prop boy into the roles. This is shameless Noises Off and The Play That Goes Wrong territory, but mercifully this entire subplot is forgotten after the scene, never to be brought up again. There are no mishaps, no one gets bonked on the head by wayward scenery, no one forgets lines, and everything goes swimmingly. Why is this prologue here if it's dropped like an afterthought? Thankfully, the opening is brief, and once the magic of Dickens takes over, the tale tells itself.

The story's compressed, concocted down to the essentials: there's no little sister at the boarding school, financé Belle delivers her “another god has displaced me” to young Ebenezer and off she goes; Fezziwig is barely present; the Spirit of Christmas Present is a trio of goofy goodwills. Dressed in raggedy musty cowl, the Spirit of Christmas Future is actually scary; and the ending is more belabored than necessary.

Running without intermission, this is Dickens' Carol as bullet points, but it works surprisingly well. Running the party scene concurrently with the Cratchits dinner is just right, the tone perfect. The nimble cast parlays numerous roles with characteristic Alley finesse. Rainey, who's played Scrooge over the years, is a sweet/sour old miser, tending toward the sweet, so his ultimate reclamation is a trifle anti-climactic, but, hey, this is Christmas after a year of hell; everybody gets a pass.

A Christmas Carol continues through December 29. at 7:30 p.m. Tuesdays through Sundays; and 2:30 p.m. Saturdays and Sundays. No Thanksgiving Day performance. Proof of COVID vaccination or a negative COVID-19 test within 72 hours are required for all guests 12 and up. Face masks are required. For more information, call 712-220-5700 or visit alleytheatre.org. $28 -$121.
KEEP THE HOUSTON PRESS FREE... Since we started the Houston Press, it has been defined as the free, independent voice of Houston, and we'd like to keep it that way. With local media under siege, it's more important than ever for us to rally support behind funding our local journalism. You can help by participating in our "I Support" program, allowing us to keep offering readers access to our incisive coverage of local news, food and culture with no paywalls.
Make a one-time donation today for as little as $1.