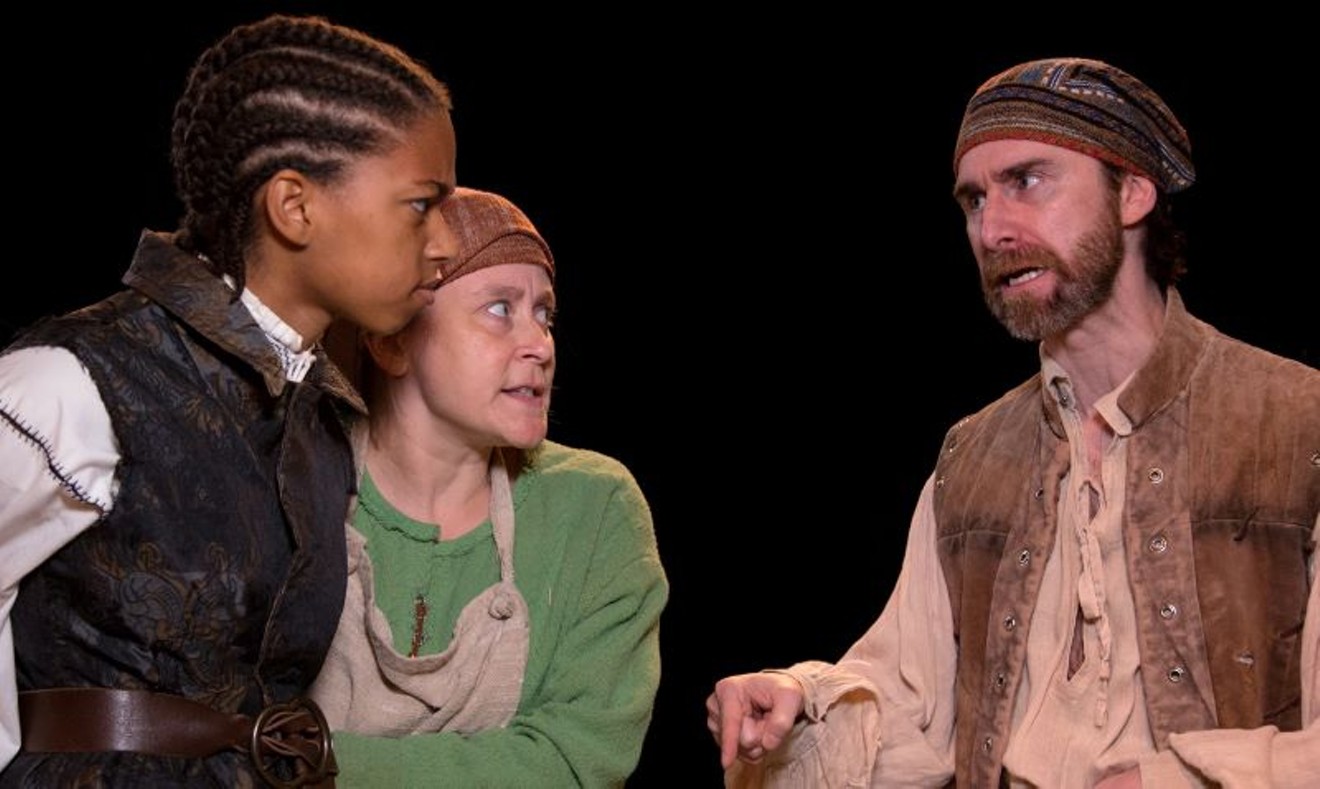 Jane Anderson, playwright of Main Street Theater's latest production Mother of the Maid, is an actress and award-winning, prolific TV writer whose career spans The Wonder Years, The Facts of Life, Mad Men, Olive Kitteridge, The Wife, and The Positively True Adventures of the Alleged Texas Cheerleader-Murdering Mom. She's been around and knows her way around a well-constructed tale. So why is this bio play from 2015 such a disappointment?

Perhaps because it has gone through 40 rewrites. That reveals much. Maybe it reads better than it plays. Could be. Or, in this play about a strong mother and her obstinate teenage daughter, when that child is Joan of Arc and you focus on her mom, your play might suffer from a lack of balance and interest. Something's gone wrong, and rewrite 41 won't fix it.

There is no fault to be found in Shannon Emerick as the eponymous title character, Isabelle. She brings her always fierce and determined nature to the role. She is one resolute mother, ruling her humble farm – a “shitehole,” she calls it – with unqualified faith and solid common sense. She knows the nearness of death and misery in the hamlet of Domrémy; she's witness to the marauding English army who've butchered her neighbors; she knows the power and love in discipline; she also knows the power of a shoulder to caress and comfort and she relishes the goodness and harsh realities in nature. All this is on display in Emerick's strong capable hands with her expressive face and vocal prowess. You can see the careworn yet proud farmer: sturdy, sure, devout. Like Pearl Buck's Olan, she is the earth. It's one of two performances that keep this wayward drama on any realistic track at all.

Dain Geist, as Joan's father Jacques, brings a gruff believable presence to his hardscrabble laborer. He's so tied to the earth, he can't conceive of Joan's visions, nor her unfailing belief in her holy command to lead France to glory. His daughter is so intransigent in her willfulness, it must be beaten out of her. That will cure her. He will battle his wife if need be to keep his family whole, but his macho pride wilts under Isabelle's maternal warmth. He witnesses Joan's martyrdom and his short, haunting monologue is a highlight. Geist and Emerick mesh in ways this play can't even fathom.

Elizabeth Barnes plays Joan as moody petulant teen, which is how Anderson writes her. But more is required. There's not much passion to her Joan; even her ecstatic visions are rendered low-key. Mom thinks it's burgeoning sex. It may very well be, you know teen girls and their idols — St. Catherine as Britney Spears. Only in her final scene in the prison at Rouen, where her doubts are manifested and she's been abandoned by her saints, does Barnes catch fire. It's a true moment of terror. Mom comforts her with cozy village stories to salve her as she dons the white chemise she wears to the stake.

When a playwright directs all attention away from a major historical figure, what's left? All the important events are rendered secondhand. Improbable but true, Joan procured a meeting with Robert de Baudricourt, a garrison commander stationed in a nearby town, which led to an audience with the Dauphin of France who deputized this teenager to lead his army (see Shaw's Saint Joan). She was 17 when she began her march to sainthood.

Since this is mom's story, we never see any of this, nor much of what follows in Joan's amazing journey. There is no Dauphin, which is a pity, since he's such a brilliant foil in Shaw. So, we're stuck at the farmhouse for exposition, along with Joan's vainglorious brother Pierre (Jacob C. Sanchez) and unctuous village priest Gilbert (Dwight Clark), or backstage at the court of Reims during Charles VII's coronation where Isabelle's rustic charm outmatches the Lady of the Court's noblesse oblige (Michele Harrell). This is not the stuff of high drama. When the clueless Lady gushes, “You're fabulous. I adore you,” what are we watching, The Real Housewives of Reims? The play muddles around like this for most of its scenes, not knowing where to land or when it should moor. It's not grounded anywhere.

Except for Emerick and Geist, everybody seems at sea. Director Rebecca Greene Udden can't find a convincing handle on which to hang this nebulous play. Is it a comedy, a drama, a dramedy? Whatever, it's a curious hybrid, threadbare in texture and atmosphere.

Macy Lyne's costumes, some of them via the Costume Connection of Houston, are appropriately homespun and vaguely medieval; Liz Freese's two sets are minimalist in the extreme; and John Smetak's lighting is uneventful, except for the bright halo around Joan when Isabelle visits her daughter at the court. With an ill-timed blackout, the stunning visual dies way too brief.

Isabelle d'Arc is a fascinating personality to put on stage. As Anderson correctly portrays, she did learn to read and write and did petition Pope Nicholas V to reopen Joan's trial, later arguing forcefully before Pope Callixtus' papal court in Paris for her daughter's rehabilitation. She was successful. In 1456, ironically at Rouen, the scene of her execution, Joan's trial was annulled. Three years later, Isabelle died. It took a bit longer for her daughter to be canonized – 1920.

If you want a mother figure to memorialize, I suggest Isabelle d'Arc. Not because of Anderson's play, but to counter it.

Mother of the Maid continues through February 27 at Main Street Theater, 2540 Times Boulevard at 7:30 p.m. Thursdays through Saturdays; and 3 p.m. Sundays. Proof of COVID-19 vaccination or a negative COVID test within 48 hours is required. Masks required. For more information, call 713-524-6706 or visit mainstreettheater.com. $36-$55.
KEEP THE HOUSTON PRESS FREE... Since we started the Houston Press, it has been defined as the free, independent voice of Houston, and we'd like to keep it that way. With local media under siege, it's more important than ever for us to rally support behind funding our local journalism. You can help by participating in our "I Support" program, allowing us to keep offering readers access to our incisive coverage of local news, food and culture with no paywalls.
Make a one-time donation today for as little as $1.