There's a lot to like about this Lincoln Center Theater production of My Fair Lady, now at the Hobby Center. Photo by © Joan Marcus 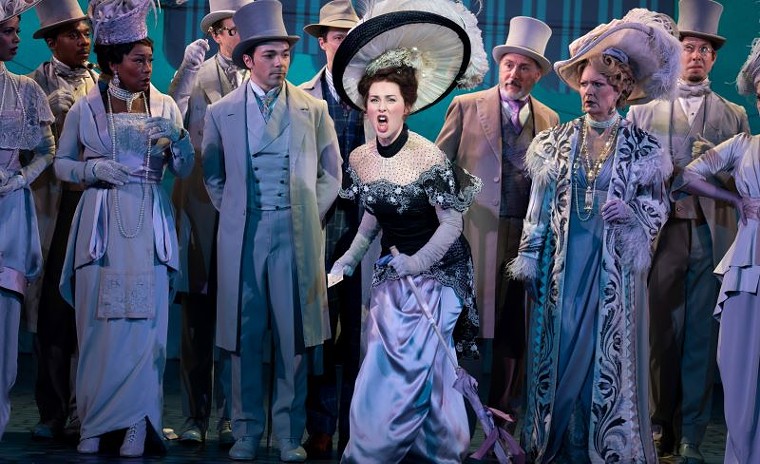 There's a lot to like about this Lincoln Center Theater production of My Fair Lady, now at the Hobby Center.
Photo by © Joan Marcus

Alan J. Lerner and Frederick Loewe's My Fair Lady (1956) is in a class all its own. This is the closest Broadway gets to perfection. You know you're in secure hands right at the downbeat of that sparkling overture. Remember overtures?

Those nuanced orchestrations by masters Robert Russell Bennett and Phil Lang, even amplified in the cavernous Hobby, sound lush and golden. You settle back in your seat, comfy and warm, without a care in the world, and let this show wash over you. Perhaps “cascade” would be better, for its numerous pleasures are rarely to be found in contemporary musicals. This 65-year old chestnut is the youngest thing in town, forever fresh and effervescent, constantly surprising even though we know every tune and every lyric.

Broadway at the Hobby's presentation is the acclaimed Tony-nominated Bartlett Sher revival from Lincoln Center Theater with its more demanding Eliza (Lean in, dearie, lean in), Michael Yeargan's revolving set of an Edwardian house, Catherine Zuber's Tony-winning lavish costumes, and a minimalist but atmospheric Everything Else. It's a dreamy production of a dreamy show.


The good bones are original, straight from Shaw. Lerner's book is classbook Adaptation 101: Don't mess with something that works. Tighten and pare where necessary, condense and fill in where needed (the “Ascot Gavotte” scene and the entire finale), and keep Shaw intact, although you may borrow from Shaw's own 1938 film adaptation of Pygmalion. His characters are already formed, the plot's airtight, he doesn't need much of a rewrite. What Shaw needs is music, and Loewe supplies the tunes in glorious amplitude. His songs – part Pearly King music hall, part Vienna sweep – are as witty as Lerner's lyrics and book, via Shaw, of course. In praise of the musical's uniqueness, Broadway archeologist Ethan Mordden said that Lerner and Loewe didn't turn Pygmalion into My Fair Lady, they turned My Fair Lady into Pygmalion. A ripe compliment indeed.

Sher adds his own sly complements, amping up the sexual frisson between Higgins (Laird Mackintosh) and Eliza (Shereen Ahmed), as when they accidentally bump into each other during “The Rain in Spain” number. It's fleeting, but very telling. Higgins remains an insufferable prig, but Sher casts him younger, certainly a decade or too from Rex Harrison's iconic romp as a more mature insufferable prig. That gives the attraction-of-opposites plot a lot more credibility and room for depth.

Sher also gives the ending a modern gloss of ambiguity. Eliza returns while Higgins is playing a recording of her voice, a former time when all was unexplored. She removes the needle from the wax cylinder. He turns and sees her standing there. He asks, once again as he had in the past, “Where are my damn slippers?” She looks at him a bit sadly, ruefully perhaps, and walks off into the wings. There's a beat, then he throws back his face in a triumphant smile. Blackout.

Shaw was ambiguous, too. At play's end, the pair have a ferocious row at his mother's home, and yet in the same breath Higgins asks Eliza to purchase some gloves for him on her way home. She's off to her father's wedding and brusquely replies that he won't ever see her again. She leaves. Higgins blithely says to his mother, “She’ll buy 'em all right enough.” In the stage directions, Higgins “chuckles and disports himself in a highly self-satisfied manner.”

For the Korda film version, Shaw was cajoled into writing a happier ending. He hated it but acquiesced. The musical uses this. Sher adds Eliza leaving. It seems wrong, unless it's Higgins' hallucination, which seems equally out of place.

Having her come back is the right choice. It completes the arc. Shaw or not, this is a Broadway musical, and after the bickering and jousts these two stubborn mules engage in, they've got to get together. Whether they stay that way is another musical.

In the lengthy prose epilogue to the play, Shaw predicted Eliza would marry ne'er-do-well Freddy and have modest success as a green grocer. But he also noted: “Eliza’s instinct tells her not to marry Higgins. It does not tell her to give him up.” She doesn't, according to Shaw, and they both remain in each other's lives.

The cast is good, but even with age compatibility a plus, who can ever comfortably wear Harrison's or Julie Andrews' shoes? Mackintosh is bluster and ego, which is right, and he certainly sings better than Harrison, but the old pro had history. He wasn't called “sexy Rexy” for nothing. Behind his bluster were intimations. He had heat. Mackintosh is cool.

At times Ahmed sings a phrase and there's a flash of young Andrews' crystal voice, but it comes and goes. As tough cockney Eliza, she's a bit too rough for her sweetly plaintive “Wouldn't It Be Loverly,” but she makes a smashing faux duchess. When she walks into Higgins' study in her Edwardian gown with red silk mantle, the audience gasps, as well they should. As Eliza's wayward dad, Alfred P. Doolittle (who gets his comeuppance in a most Shavian manner), Adam Grupper growls and struts like a proper English panto character. He stops the show with his hit “Get Me to the Church on Time,” a bawdy dance number with both men and women in drag, who finally carry him to the church as if he's on a bier going to his funeral, a clever little touch from choreographer Christopher Gattelli. The dragsters, not so much.

Without question, My Fair Lady is one of the great ones. Except for that unsatisfying flourish at the end, Broadway at the Hobby's presentation is “abso-bloomin-lutely loverly.”

My Fair Lady. Performances are scheduled for September 16-19 at 7:30 p.m. Tuesday through Thursday and Sunday, 8 p.m. Friday and Saturday and 2 p.m. Saturday and Sunday. The Hobby Center, 800 Bagby. For more information, call 713-315-2525 or visit thehobbycenter.org or broadwayatthehobbycenter.com. $35-$125.
KEEP THE HOUSTON PRESS FREE... Since we started the Houston Press, it has been defined as the free, independent voice of Houston, and we'd like to keep it that way. With local media under siege, it's more important than ever for us to rally support behind funding our local journalism. You can help by participating in our "I Support" program, allowing us to keep offering readers access to our incisive coverage of local news, food and culture with no paywalls.
Make a one-time donation today for as little as $1.