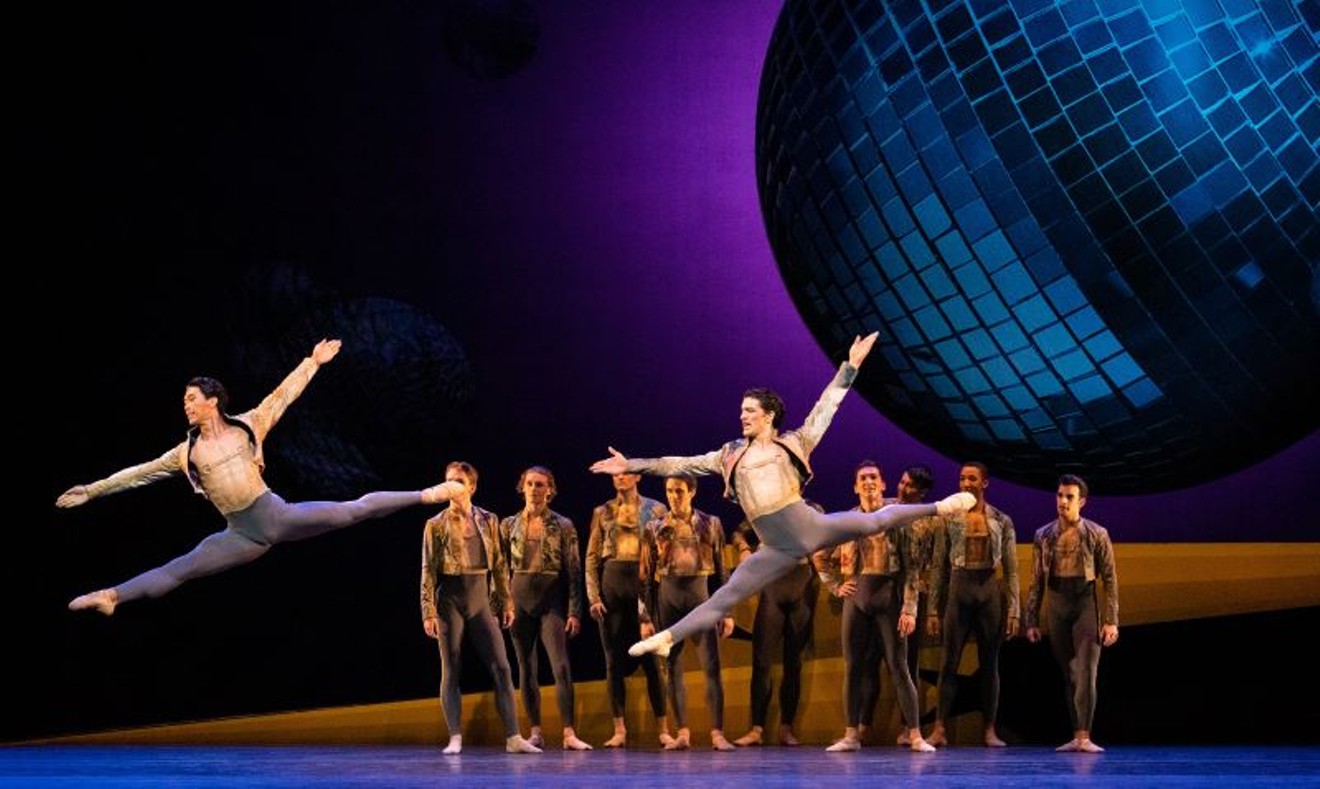 In a night of ballet accented by accomplished and sometimes dazzling lighting and set designs, with music from Mozart, cellist Yo-Yo-Ma and modern icon David Bowie, the song swirling through the head of this audience member Friday night when she left the Wortham Center (and not anywhere on the program) was disco queen Donna Summer's "She [They] Works Hard For the Money."

Principal Dancers Connor Walsh and Karina Gonzalez were highlighted in the ballet which focused as much attention on expressive arm and hand movements as the legs and feet. Wearing black and gold classic ballet outfits, they paired seamlessly with each other, in turn playful and serious. Their trip across what presumably was a slightly slick floor was more fortunate than a few other dancers whose movements were interrupted by a few stumbles and what appeared to be one dancer's unintended slide to the floor.

Next up was Christopher Bruce’s Hush, featuring a family of six dancers, accompanied by Bobby McFerrin and Yo-Yo Ma providing the soundtrack with music ranging from the classical to a backwoods hoedown. One highlight was the choreography to Rimsky-Korsakov's "Flight of the Bumblebee" as dancers Christopher Gray and Charles-Louis Yoshiyama dealt with an onslaught of the bees, with Gonzalez coming to the rescue in a distinct and unanticipated manner and reminding us she is as accomplished an actress as a dancer.

While he did sing some lyrics. most of McFerrin's delivery was that of beep-bing-do variety — sounds that punctuated and complemented the music played by Ma and music that the pair first collaborated on for a children's album in 1992. Performers displayed their dancing and gymnastic (cartwheels anyone?) talents in a set filled with silent moments and exuberant movements, crescendoing with "Hoedown!"

The gymnastics (more cartwheels!) continued with choreographer Trey McIntyre’s world premiere of Pretty Things in which 11 men danced in what seemed non-stop action to music that includes Bowie's "The Man Who Sold the World," "Life on Mars," "Oh! You Pretty Things," "Little Wonder," "Ashes to Ashes," "Ziggy Stardust," and "Changes." The music of "Young Americans" provided the perfect ending to the glitter-filled routine that  McIntyre, a dancer himself, says he conceived to address the narcissism among men in ballet.

Preening like peacocks, the dancers alternated between displays of one upsmanship and team building, showing off their impressive form — both in dance and jacketless torso displays — in an exhausting and exhilarating routine.

It should be noted that none of these ballets would have worked as well as they did without the lighting efforts of Christina R. Giannelli (ONE|end|ONE and Hush) and Michael Mazzola (Pretty Things.) And kudos to Holly Hynes (ONE|end|ONE) for costume design, Marian Bruce for costume and scenic design (Hush) and Thomas Mika for his costume and scenic design — the huge blue disco ball — that dominated the back of the stage in Pretty Things.

The burst of glitter that rained down at the end of the show, seemed a perfect conclusion to the night's mixed rep giving so many dancers a chance to shine. Which they did.

Performances continue through May 29 at 7:30 p.m. Thursday, Friday and Saturdays and 2 p.m. Saturdays and Sundays at the Wortham Center, 501 Texas. For more information, call 713-227-2787 or visit houstonballet.org. $25-$149.
KEEP THE HOUSTON PRESS FREE... Since we started the Houston Press, it has been defined as the free, independent voice of Houston, and we'd like to keep it that way. With local media under siege, it's more important than ever for us to rally support behind funding our local journalism. You can help by participating in our "I Support" program, allowing us to keep offering readers access to our incisive coverage of local news, food and culture with no paywalls.
Make a one-time donation today for as little as $1.