There's A Lot In Quack To Laugh And Think About 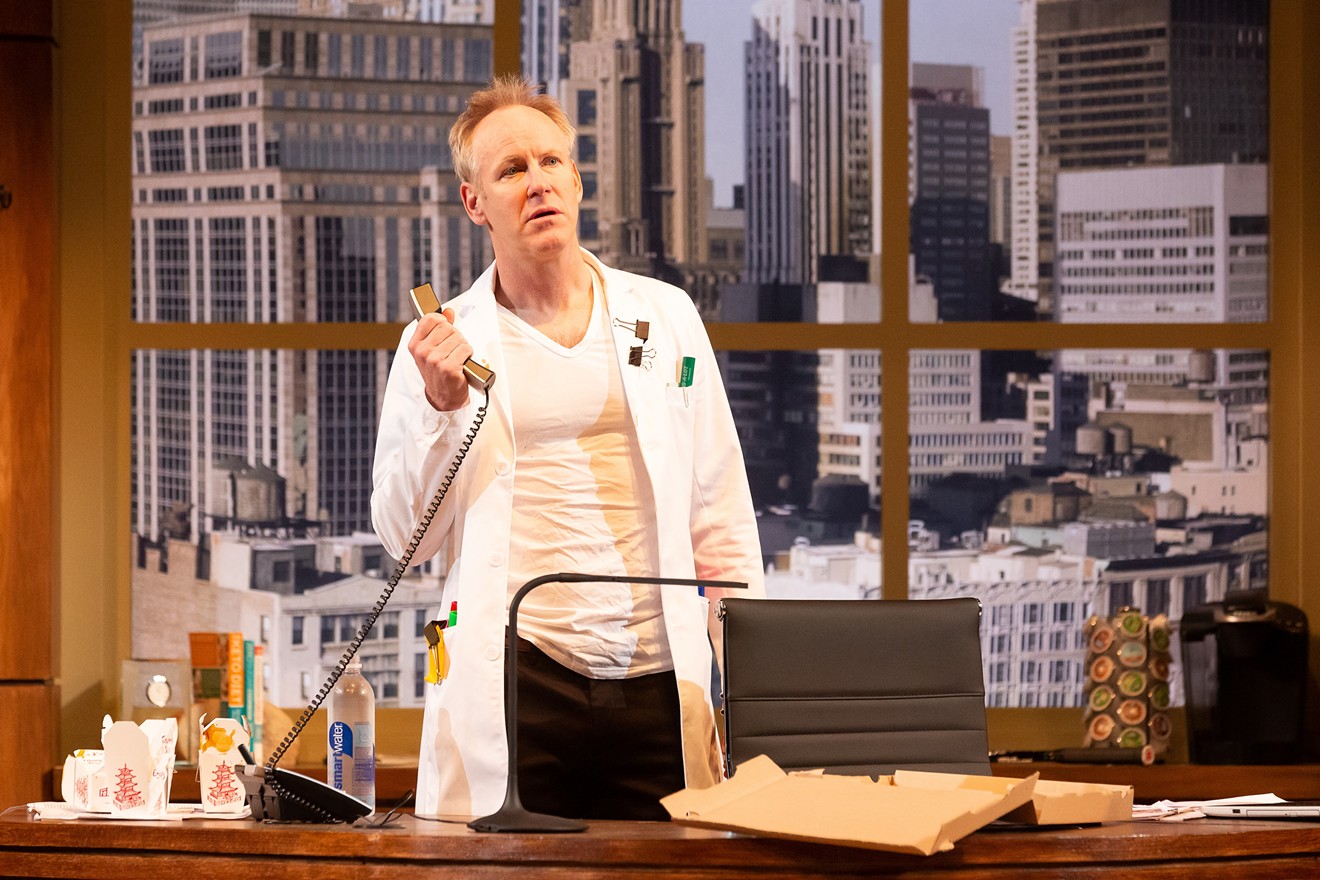 Quack, in the sense of a less than reputable medical practitioner, is a shortening of the Old Dutch word quacksalver, or person who cures with home remedies. Over time, the term took on a more nefarious connotation, describing a health care provider who uses false medicine and theories in his or her practice.

There. Don’t say you never learn anything from a theater review.

When faced with a play, called Quack, about the scandalous fall of a famous male television doctor, it’s natural then to expect a story about said medicine man’s questionable medical ministrations and motivations. And this is what we get in Eliza Clark's new play, getting its regional production at the Alley Theatre after a reading of the play as part of the Alley All New Festival. But Quack, a cleverly funny and oh so of our present social concerns narrative, is actually much more than a tale of snake oil.

Quack is about fame, and entitlement and body shaming and misogyny and weight loss and harassment and journalism and internet trolls and vaccinations. Oh, and it’s also about power in the workplace, diversity, gender dynamics, herbal supplements, and money. In other words, there's a whole mess of things going on.

In another playwright’s hands, this would amount to too much of a lot. But instead, Clark pulls off a medical miracle and manages to somehow suture all of this together, fairly elegantly, in a jam-packed two hours of entertainment with a side dish of food for thought.

For 20 years, TV megastar Dr. Irving Baer (Chris Hutchison) has been America’s on-air doctor, beloved by his audience and the network alike. But he finds himself in hot water when his equivocations around vaccinations are blamed for the deaths of two children. The story of how this happened is revealed in an 11-page deep dive article into Baer’s career by an African American reporter, River Thumbolt (Michelle Elaine), whose only major claim to fame thus far has been a book detailing her 200-pound weight loss.

Suddenly Thumbolt is in the spotlight – interviews on CNN and a book deal further investigating Baer follow- but the more she talks and the more she digs, the more Dr. Baer’s career suffers. As does the career of his wife Meredith (Julia Krohn) the head of her own weight loss empire, an offshoot of the doctor’s on-air campaign to help America lose weight.

The one person close to the doctor that doesn’t seem to suffer is his subservient and painfully loyal assistant/on-air contributor, Nurse Kelly (Christina Liang), who is tapped to fill in for Baer while the scandal rages. With a female reporter attacking him, his female assistant taking over his job and his lioness of a wife enraged at his mismanagement of the situation, Dr. Baer is well tenderized when he asks to meet with the seemingly one member of the public defending him. So what if Internet poster, Brock Silver (Jay Sullivan), has problematic and creepy misogynist views on the roles of men and women. At least he's on the doctor's side. And maybe he can help.

Our fear as this play unfolds is that these characters will turn into one-dimensional stand-ins for the issues Clark wishes to discuss. Instead, she smartly imbues each one with a little twist here and a tad of a surprise there, making sure that everyone in the story is neither angel nor devil. Sure River has ammunition, by why is she really going after Baer? Is Meredith a bitch by nature or by necessity? Kelly owes her career to Baer and acts as such, but is she as devoted and timid as she presents? Even Brock gets an empathetic moment to explain how he ended up as such a turd.

Yes, some of it is a little on the nose and fits too neatly together. But considering all the threads Clark dealt herself and the issues she's trying to cover, it's a wonder that she makes us still care and be surprised when the aha's eventually come.

As for Dr. Baer, you can almost hear Clark giggling behind the lines she gives him. "I'm a feminist…I've dedicated my life to women!" he rages. True, he does try to help women lose weight and true, he does believe in the ability of Nurse Kelly. But also true – he polices women’s bodies and he still expects his on-air colleague to answer his phone and run his errands. Yes, he took an ophthalmologist to the Third World to help patients but he also makes millions from the questionable at best herbal supplement he hawks on his show.

But it’s his quirks that make him so funny to watch. Repetition is at play in Clark’s script when it comes to the good Doctor. Repetition belying ego that is. Just listen to him tell the women he deals with to “write that down” whenever he says something that pleases him. Or laugh as he, for the umpteenth time, natters on about how medical caregiving goes back to caveman times and what a noble profession it is.

As always, good writing only exists on the page unless you have a director and a cast that can bring it to life, and here we have both.

Director Judith Ivey (of Tony-winning fame for her own performances) shows great affection for her actors while keeping a tight hold on the action. Each performer gets his or her showcase moment but never once does she let things turn into zaniness or a scream-fest. Here, the comedy comes from listening, not from volume or physical antics, and it's a pleasure.

The cast responds with nimbleness. As much as we want to shake Nurse Kelly for her compliant obedience, we marvel at Christina Liang's ability to make us respect and root for her. Yes, Meredith is hell on wheels, but Julia Krohn isn't all angles, there are soft spots there that make it impossible to write her off. River gets our justice juices flowing. She represents a new order that many will feel a woke allegiance with. But when her time comes to show that she isn’t without flaws, Michelle Elaine, doesn’t paint it pretty. As the woman hater, Jay Sullivan has perhaps the hardest task at achieving nuance. But even though what he says or alludes to is repugnant, his delivery is calm, non-inflammatory, polite even. Sullivan plays it quiet and scares us even more in the process.

But really, the spotlight belongs to Chris Hutchison as Dr. Baer. Makes one wonder why in the last six years at least (my life in Houston) this is the first time we’ve seen him in a showy lead role. Hutchison’s range from dismissive to indignant to berated to vengeful is on full display and even better, on full display with incredible comedic timing. Who knew he could play funny like this? Like the rest of the cast, Hutchison never devolves into hysteria, instead relying on his trademark gravelly voice and easy flowing physicality to show emotion. Whether he’s deriding his former Princeton classmates or nursing a hangover under a yoga mat, Hutchison has our attention and our laughter.

In a modern-day naturalistic play like Quack, it's easy to overlook the costume choices. After all, they just look like us. But kudos must be paid to Costume Designer Andrea Lauer for finding just the right stilettos and the perfect doctor casual wear and the just this side of creepy leather jacket that an Internet troll might choose. That everyone looks exactly their part is Lauer’s doing and it’s a job well done.

As is the set design by Linda Buchanan. Most of the action takes place inside Baer's office, all modern wooden paneling, leather furniture, and orange glowing cabinet niche showcasing numerous Emmy's and other awards. But it's the view from the office that really sets the mood. An unmistakeable New York skyline featuring the Chrysler Building sets the tone for the level of the Doctor's success perfectly.

By the end of the play, Clark has pretty comedy for dark or soon to be dark endings. It feels both incongruent and yet inevitable given how many hot buttons she was chasing. And yet, we leave the show feeling like we've experienced something. An eye-opening and a disillusionment. A little bit of this and a little bit of that.

It may be too much in total, but with talent like this all , it never feels like we’re taking our medicine.

Quack continues through March 10 at the Alley Theatre, 615 Texas. For information, call 713-220-5700 or visit alleytheatre.org. Recommended for audiences 13 and up. $45-$69.
KEEP THE HOUSTON PRESS FREE... Since we started the Houston Press, it has been defined as the free, independent voice of Houston, and we'd like to keep it that way. With local media under siege, it's more important than ever for us to rally support behind funding our local journalism. You can help by participating in our "I Support" program, allowing us to keep offering readers access to our incisive coverage of local news, food and culture with no paywalls.
Make a one-time donation today for as little as $1.