When Ramses II Ruled the World

The Ramses II exhibit at HMNS Photo by Michael Rathke/ Courtesy HMNS
Throughout history, saints and sinners, czars and generals have been called “great,” from Alexander of Macedonia, Catherine of Russia, Nebuchadnezzar of Babylon, to Charlemagne of France, Alfred of England, and Kamehameha of Hawaii. But the first to be called so, even during his own lifetime, was Ramses II, pharaoh of Egypt.

The story of his lengthy life and the unparalleled splendor of his reign is on awesome display at the Houston Museum of Natural Science in the special traveling exhibition Ramses the Great and the Gold of the Pharaohs. This is state-of-the-art display design, crafted to capture the imagination, spacious, well-captioned, and augmented by numerous video installations using CGI technique to fly through tombs and temples showing before-and-after views. You may be surprised, if not stunned, to see what the latest discoveries have unearthed.

Everything – every surface, every statue and column, every chiseled feather or eyebrow, every sphinx – was painted or inlaid with precious metals or jewels. The ancient Egyptian world was ablaze in a riot of color: red, blue, ocher, green, embossed with silver, gold, amethyst, turquoise,. You name it, they used it. It was all splendidly garish. But if you think about it, what other colors did they live with every day except the dun of the desert, the green of the Nile, and the narrow strips of vegetation bordering the sacred river. The bright display from their temples and palaces enriched their lives. It elevated them into another plane.

Classical scholars know Ramses II from hazy references in the Histories of Herodotus and Diodorus; poets know his Greek name Ozymandias from Shelley's sonnet; archaeologists know him from his incessant propaganda (his name is incised on nearly every extant monument throughout Egypt). Modern audiences know him from Yul Brynner's iconic portrayal in Cecil B. DeMille's The Ten Commandments. Commanding, egotistical, regal, he was revered as a god while living and still survives as a mummy in the soon-to-open spectacular Grand Egyptian Museum near the pyramids of Giza outside Cairo, his wispy hair dyed red with henna.

He was ancient Egypt's master builder, adding to his ancestors' works or erecting grandiose temples dedicated to himself, such as Abu Simbel in the south at the border of ancient Nubia and the magnificent Ramesseum at Thebes. He built treasure cities in the Delta at Piramesse and Pithom, mentioned in Exodus as the cities built by the enslaved Hebrews. He reigned during Egypt's New Kingdom 19th Dynasty (1279-1189 B.C.) when Egypt's glory was unsurpassed, its splendor and luxury unbounded, its artistry at its zenith, all during an unprecedented period of peace and prosperity – when Egypt ruled the world, and Ramses ruled Egypt.

Ramses II was the longest-reigning pharaoh, about 67 years, and died the oldest at around 92. He had scores of wives, numerous concubines, and countless children. You could say he was the richest man in the world, the most powerful and influential, the absolute monarch of monarchs, the king of kings. Or you can just call him “Great One.” 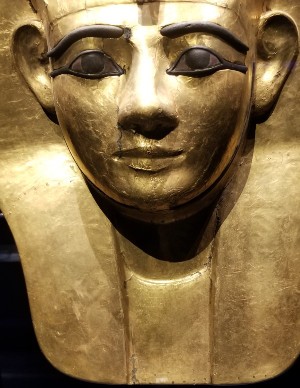 Almost everything we know about ancient Egypt derives from two sources: temples and tombs. Only sanctuaries devoted to the gods and their earthly avatars were carved from stone, everything else was mud brick. Elegant palaces with malachite floors, silver door jambs, and gilded walls were no more permanent than huts of the Fellahin. Only temples survived the millennia, covered in inscriptions which detail the official, approved story. Of their everyday existence we have the tombs, richly painted on every surface with intensely personal and intimate scenes.

For all their devotion to the gods, the ancient Egyptians loved life and wanted it to continue into eternity. They fervently believed in resurrection. So they filled their tombs with everyday objects that they would need later – beds, chairs, and cedar chests; chariots, weapons, game boards, unguent jars and cosmetics, wine and beer jugs, musical instruments, pen and papyrus, clothing, food stuffs, pets. Anything they used in life they wanted in death.

The walls spill over with vibrant scenes of hunting, dancing, fishing, parties, parades. Workers thresh the fields and make beer. Look closely at the inscribed gold-and-silver dish and see young girls swimming in a garden pool surrounded by lush greenery under columned pavilions as they chase ducks. For the upper class, it was a life of unbridled happiness and unsurpassed glamour. The poor, of course, had no recourse to richly decorated tombs, but they, too, honored the traditions and buried in the sand what little they had to use later. The recent excavations of the workmen's village near Deir el-Medina has unearthed a treasure trove of everyday life.

Had Tutankhamun's relatively intact tomb from the late XVIII Dynasty not been discovered by Howard Carter in 1922, we'd be bereft of truly knowing the staggering amount of luxury these ancients possessed. As with most royal tombs in the Valley of the Kings, Ramses' was plundered in antiquity, stripped of all objects that could be bartered, sold, or melted down. What's a grave robber to do with an inlaid walking stick except pry off its gilding and precious stones and leave the wood to rot in the desert? No Curse of the Pharaohs for them. The dead were dead, and the living needed to eat. 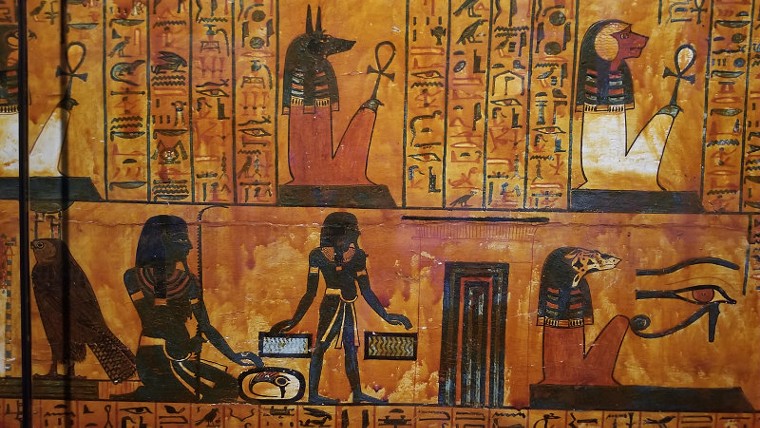 There's precious few personal possessions surviving from Ramses' life, other than statues from his own works – there are many truncated heads here, all exquisitely carved — so the exhibition focuses upon the daily life and times of the XIX Dynasty, with a running commentary of Ramses' prodigious accomplishments. The famous Battle of Kadesh, an early campaign, probably a draw with the Hittite enemy, although proclaimed otherwise by Ramses, is projected on glass panels with 3-D animation and surround sound. Very high-tech.

For my taste, nothing in art compares to the matchless beauty and craftsmanship of Egyptian design. For example, look at the signet ring bearing Ramses' throne name (one of five titles bestowed on a pharaoh). No simple band this, but an intricate openwork pattern that spells out his name using the hieroglyphics of crouching deities, sacred cobras, sun discs, and decorative water symbols. It's barely an inch high and not much wider in circumference. It is one of the wonders of the world. How could any goldsmith accomplish such delicacy and design without the aid of a magnifying glass? How did these people from three thousand years ago do it? I smell aliens.

Ancient Egypt was awash with artists the like of which wouldn't be seen until the Renaissance and later. There must have been hundreds of thousands of Michelangelos, Fabergés,and Tiffanys furiously painting, sculpting, sawing and drilling nonstop to produce the quantity of stuff that's extant from these ancient artisans. The quality is nonpareil, priceless, gorgeous. Even the faience floor tiles discovered in the ruins of Ramses' palace in the Delta are miniature character studies of the foreigners captured in war, detailing costume and facial features easily recognizable today. Archaeologists assume they were placed on the floor so pharaoh would constantly tred upon them in his rush-and-gilt sandals.

Small beauties abound throughout the exhibition: wrapped crocodile and cat mummies; beaded collars; a sketched limestone ostricon in black ink from the young hand of an artist in training; the ravishing outer coffin of Sennedjem, either architect or royal painter, entirely covered with scenes from the Book of the Dead; a silver and obsidian mirror used by a princess; the gilded wooden funeral mask of Pharaoh Amenemope; a wooden quiver painted to look like animal hide. The list of wonders goes on.

While hardly on the scale of the phenomenal Tut exhibit from years ago, there are enough marvels on hand at Ramses the Great to introduce you to the fascination, mystery, and radiant beauty of ancient Egypt during its highest glory days. “Health, life, and prosperity” was the typical greeting among ancient Egyptians. Its meaning is very much alive, as this thrilling exhibition unquestionably proves.

Note: As a bonus feature, there's a virtual reality experience called Journey to Osiris at additional cost. If you've never tried on the goggles, here's your chance. The seat rotates and bounces, the CGI is impressive and fully 360⁰. The short ride, emceed by ghostly great wife Nefertari (who has undergone breast augmentation in the intervening millennia), is a bit cheesy but fun for a novice. The 3-D will have you lifting your legs and moving out of the way of approaching doorways and a violent sandstorm appropriated from The Mummy. $18-$22.

Ramses the Great and the Gold of the Pharaohs continues through May 22, 2022 at Houston Museum of Natural Science, 5555 Hermann Park Drive. For more information, call 713-639-4629 or visit hmns.org. Scheduled tickets required. Members $20. Public $27-$35. Masks recommended.
KEEP THE HOUSTON PRESS FREE... Since we started the Houston Press, it has been defined as the free, independent voice of Houston, and we'd like to keep it that way. With local media under siege, it's more important than ever for us to rally support behind funding our local journalism. You can help by participating in our "I Support" program, allowing us to keep offering readers access to our incisive coverage of local news, food and culture with no paywalls.
Make a one-time donation today for as little as $1.