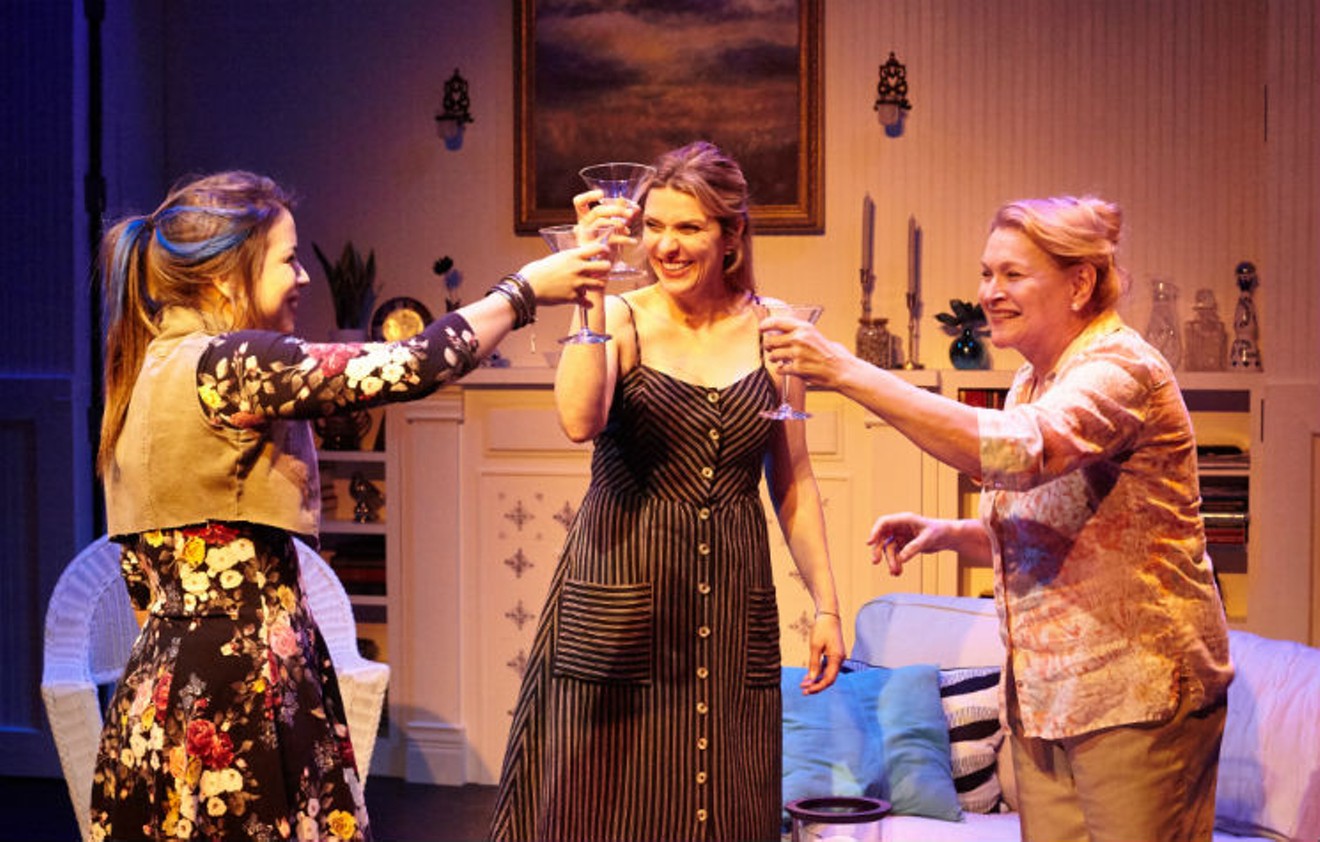 
These days, when men write plays that feature ridiculous, regressive women, we get angry. Can’t you see that women aren’t all pathetic or crazy or hysterical or any of the other derogative cloaks too often foisted upon female characters, we yell.

But what about if the playwright is a woman? Is there anything more depressing than a female playwright who gives us a show that paints women as nothing more than thinly drawn stereotypes? Actually, yes there is, as Gina Gionfriddo’s Rapture, Blister, Burn shows us. Turns out, a female-written play grappling with the difficult life choices women must make that then portrays its female characters as pathetic and maddening in their stupidity is doubly disheartening.

Of course Catherine’s fame, wealth and career accomplishments aren’t enough. She’s incomplete in Gionfriddo’s story, as she doesn’t have a husband or children of her own. Who will love her after her mother is gone, she selfishly fears with obsessive rigor? So much so that her old flame, the schlubby man-child Don, starts to look pretty attractive to her once again. And you better believe he’s game.

Not that Gwen much minds. While Catherine dreams of domestic bliss, Gwen is misty over never finishing school. True, she isn’t very ambitious herself. It’s not like she actually wants to become something or study anything in particular. She just figures if she had a degree, she could support her two kids and then she wouldn’t be stuck with a loser of a husband in a financially and emotionally poor marriage.

Get it? They want each other’s life. More than that, they want it all. This might feel more than a tad reductive in 2019, post the famous ‘having it all takedown’ courtesy of Michelle Obama who said, “That whole ‘so you can have it all.’ Nope, not at the same time. That’s a lie. And it’s not always enough to lean in, because that shit doesn’t work all the time.”

In fairness, Gionfriddo wrote Rapture, Blister, Burn in 2012 when it was still de to address the female work/family crisis like it was a puzzle to be solved. And it’s absolutely true that women, not men, are too often left trying to figure out how to, or even if, their career ambitions can mesh with their family desires/obligations. Throw some smart, complex female characters at this issue and you have a play worth watching. Throw idiotic, unlikable and unlikely characters at the same issue, and you get an audience sighing “gimme a break” as overheard several times during the production.

Perhaps the hardest thing to swallow is how Gionfriddo allows Catherine and Gwen to get their wish in a kind of Freaky Friday, be careful what you wish for type of fashion. But long before that twist comes into play, we've got a basket full of face-palms to grapple with.

And what about her loving and caring mother Alice? Is she really encouraging Catherine to go after Don? He’s married, sure, but Catherine had him first she says and she can have him again, warts and all. What sweet old mother says this to her forty-something daughter? Go for the total loser, you can make him better.

Gwen really has the short straw in the bunch. Neither successful career nor happy marriage. And she wants everyone to know it. Gionfriddo tries to make a joke out of Gwen’s oversharing, but the abundance in which she lets everyone know just how awful life with Don stretches believability. Especially when she spills her secrets in front of one of Don’s students, Avery (Christina Austin Lopez).

How this comes to be is yet another head-shaking element of this show. Despite Catherine’s fame and wealth, she apparently needs to work while she takes care of her mother, so she decides to hold feminist classes in her home during the summer. For money? For credit? We aren’t sure. We also aren’t sure why the only people who sign up are Gwen and Avery.

Gionfriddo has obviously done her feminist homework and is eager to show off what she’s learned – which would be fine if it didn’t come to us in lecture form as Catherine imparts theory to the two students. They, in turn, regurgitate and ask questions about everyone from Betty Friedan to Phyllis Schlafly. Nothing's more painful in a play that listening to dialogue that strains to be natural while trying to teach us something. Sure we learn that slasher movies may be a reaction to the push for the Equal Rights Amendment and that the issue of pornography divided the feminist movement. But theater is a show don’t tell art form, and this type of lectured to dialogue gets tired real fast. We all have the internet, we come to plays to experience, not get Wikipedia entries.

Nowhere is it more obvious that this show has serious narrative failings than in Kim Tobin-Lehl’s direction. Time and time again, we’ve watched Tobin-Lehl’s work, and without question, she is an actor’s director, able to bring the absolute best from her cast in unexpected and exciting ways. But here, not even her talents can make this talented cast compelling.

Courtney Lomelo as Catherine seems lost in the chasm between accomplished academic and utter twit, not knowing where to ground her performance. Elaine Robinson as Gwen veers from shrill to meek, never really exposing emotion in either state. Nick Farco as Don is neither impish nor charming, rendering his character completely forgettable. As Alice, Susan Shofner, seems at times out of step with the action. Only Christina Austin Lopez as Avery manages a strong performance as the sassy, confident, mature for her years, Avery.

Not helping things at all is Macy Lynne’s costume design which is both unflattering and at times era inappropriate. How do we pay full attention in the opening scene when faced with costume choices seemingly picked out to make these otherwise appealing actors look as bad as possible? Think red, paper bag waisted, full leg pants that evoke a Depends-wearing effect. Think a flimsy, short cotton stripe dress with thick tie front waist that is sheer and clingy in all the wrong ways. Then think of a grown man in infantilizing Bermuda shorts, and untucked dress shirt and topsiders. And then imagine that these are a trio all going out somewhere to dinner.

On the era-unsuitable issue, the 20-something Avery dons a number of outfits in the show that seem to confuse the decade she’s living in. She starts off with balloon pleated jean shorts with fishnet biker shorts underneath – a definite nod to 2012. Then she sports a “Be Kind Rewind” T-shirt, which could be just ironically retro. But in Catherine’s classroom when discussing '80s porn, she lets slip that she doesn’t really know about video stores, thus blowing the T-shirt cleverness. Worst of all is a later scene when she dons a “The Future is Female” T-shirt, which first had its heyday in 1972 but was just recently resurrected full force about a year ago with every fashion house and copycat designer jumping on the bandwagon.

Always nice to end on a positive, Kevin Rigdon’s set design which morphs from a full thatched roof backdrop to the homey yet shabby chic interior of Alice’s living room is a delight in color contrast. Grey/brown and monotone for the roof, shades of cream, white, blue and beige for the living room full of rattan furniture and knick knacks.

If only the rest of the show were as slick as the set design.

Rapture, Blister, Burn continues through March 23 at Studio 101, Spring Street Studios, 1824 Spring Street. For tickets , call 832-786-1849 or visit 4thwalltheatreco.com. $17-$53 with a pay-what-you-can performance on March 18.
KEEP THE HOUSTON PRESS FREE... Since we started the Houston Press, it has been defined as the free, independent voice of Houston, and we'd like to keep it that way. With local media under siege, it's more important than ever for us to rally support behind funding our local journalism. You can help by participating in our "I Support" program, allowing us to keep offering readers access to our incisive coverage of local news, food and culture with no paywalls.
Make a one-time donation today for as little as $1.