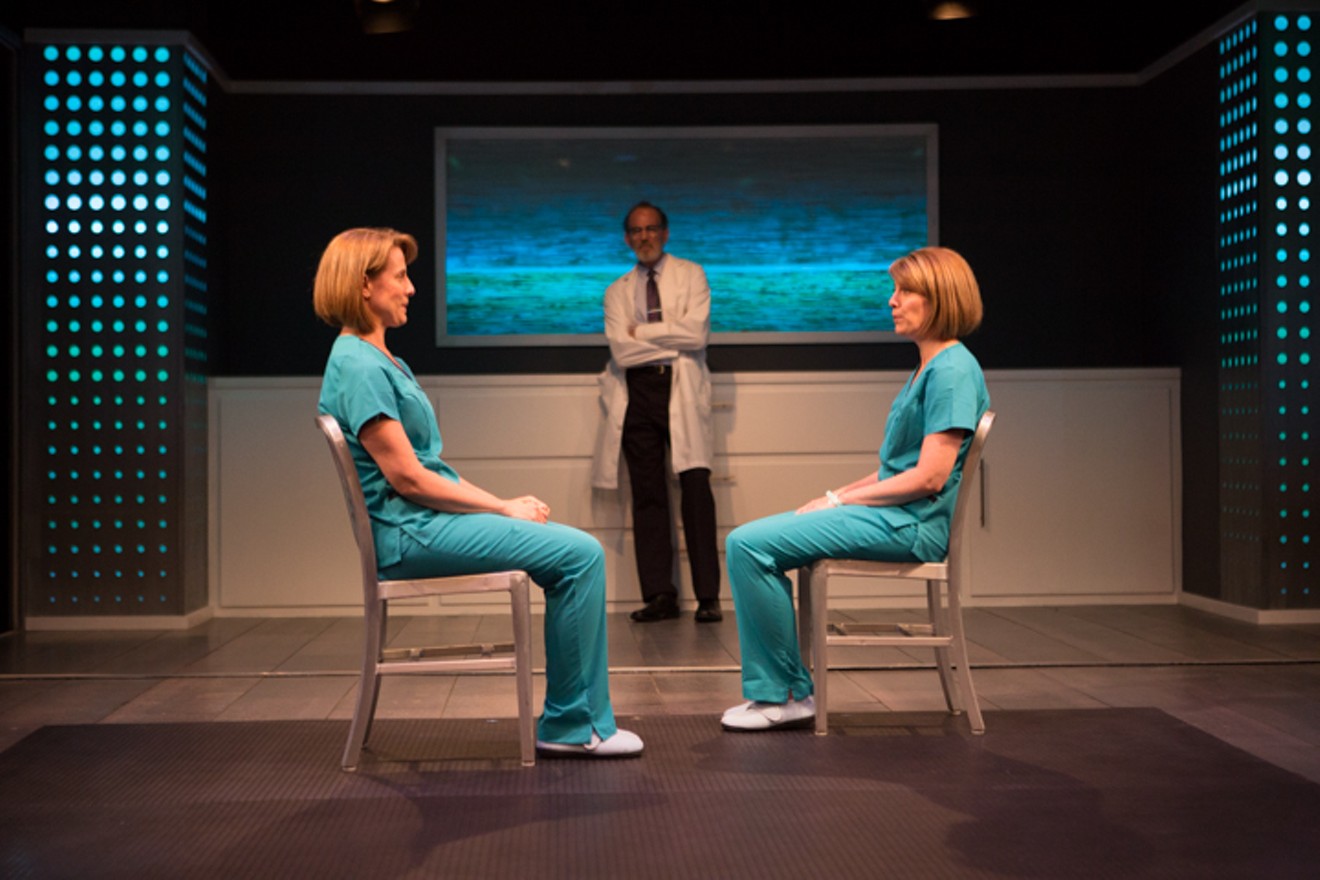 Julie Cardia, John Feltch and Janna Cardia in Stages Repertory Theatre’s world premiere production of Replica. Photo by Os Galindo
It’s not an unfamiliar story; those left behind trying desperately to cling to the memory of someone who’s passed away by any means necessary, including but not limited to computer simulation, robot or clone. Whether in one of the better episodes of Black Mirror or in the news, in a story about a son trying to create a Dadbot from thousands of his father’s transcribed words, the exploration of grief and our attempts to get back what we can never have again are tried and true ground for writers everywhere. But what about that story from the perspective of the person who knows they’re going to die and their attempt to leave something — namely themselves — behind for their loved ones? It’s here, in this less crowded space, that Mickey Fisher’s Replica, really makes its mark.

In this world premiere hosted by Stages Repertory Theatre, audiences meet Harper Dawson, a 39-year-old mother of two who’s recently received a death sentence in the form of an unnamed terminal illness. In the face of her imminent death, she volunteers for an experimental procedure that will result in the creation of a replica of herself. The bulk of the play unfolds as Harper gets to know her replica during their first session together, a time when the two are subjected to tests and asked a series of moral and ethical questions to determine just how alike they are. But, after the two answer differently to a very difficult question, to say things begin to get much more complicated would be an understatement.

Fisher’s script is gripping and suspenseful, with just the right amount of humor, but to say any more might give something away. If one were to read a spoiler-filled synopsis, it would not do justice to just how adept Fisher is at driving this particular narrative forward — navigating the messiest of human terrain, through sudden (but never cheap) twists and turns, all the while moving at a brisk (and nearing relentless) pace. The moral and ethical questions Fisher raises aren’t just for the characters, and from start to finish, the main question he keeps returning to is what makes humans human, using not only Harper’s journey, but also her replica’s, to reveal simple but powerful truths about the human condition.

Janna Cardia and Julie Cardia in Stages Repertory Theatre’s world premiere production of Replica.
Photo by Os Galindo
In a play that purposely leads you to places unexpected, you may not appreciate the nuanced performances both Janna and Julie Cardia give until the play’s end, but in hindsight both establish their individual characters early, and telegraph where they’re going in a skillful and subtle way. The two are able to quickly build an easy rapport, play up their similar mannerisms, while keeping the two characters different. Their interplay is particularly affecting as the tension ratchets up, but both get a chance to shine — Julie early in the production, and Janna toward the end.

And, not for nothing, they are both identical twins and terrific actors who allow Fisher’s story to be told in an especially unique way, i.e. without heavy make-up and wigs, suspension of disbelief or a trip to the uncanny valley.

John Feltch is the production’s third cast member, playing the benevolent Dr. Avalon, a strong paternal figure who proves to be walking the line between selfish and selfless, just as Harper and her replica do. Though with much less stage time, Fisher has still built a character in Dr. Avalon that contributes to the play’s overall themes.

The haunting, melancholic piano piece that opens the play is the first hint of what Replica will be — an emotional, complex rumination on the things that make us who we are and the problematic act of man trying to engineer those things. There isn’t a theater equivalent to the Nebula Award, but if there were, as a 90-minute one act, Replica should win it.

Performances of Replica continue through June 10 at 7:30 p.m. Wednesdays, Thursdays and Sundays; 8 p.m. Fridays and Saturdays; and 2:30 p.m. Saturdays and Sundays at Stages Repertory Theatre, 3201 Allen Parkway. For more information, call 713-527-0123 or visit stagestheatre.com. $25 to $59.
KEEP THE HOUSTON PRESS FREE... Since we started the Houston Press, it has been defined as the free, independent voice of Houston, and we'd like to keep it that way. With local media under siege, it's more important than ever for us to rally support behind funding our local journalism. You can help by participating in our "I Support" program, allowing us to keep offering readers access to our incisive coverage of local news, food and culture with no paywalls.
Make a one-time donation today for as little as $1.