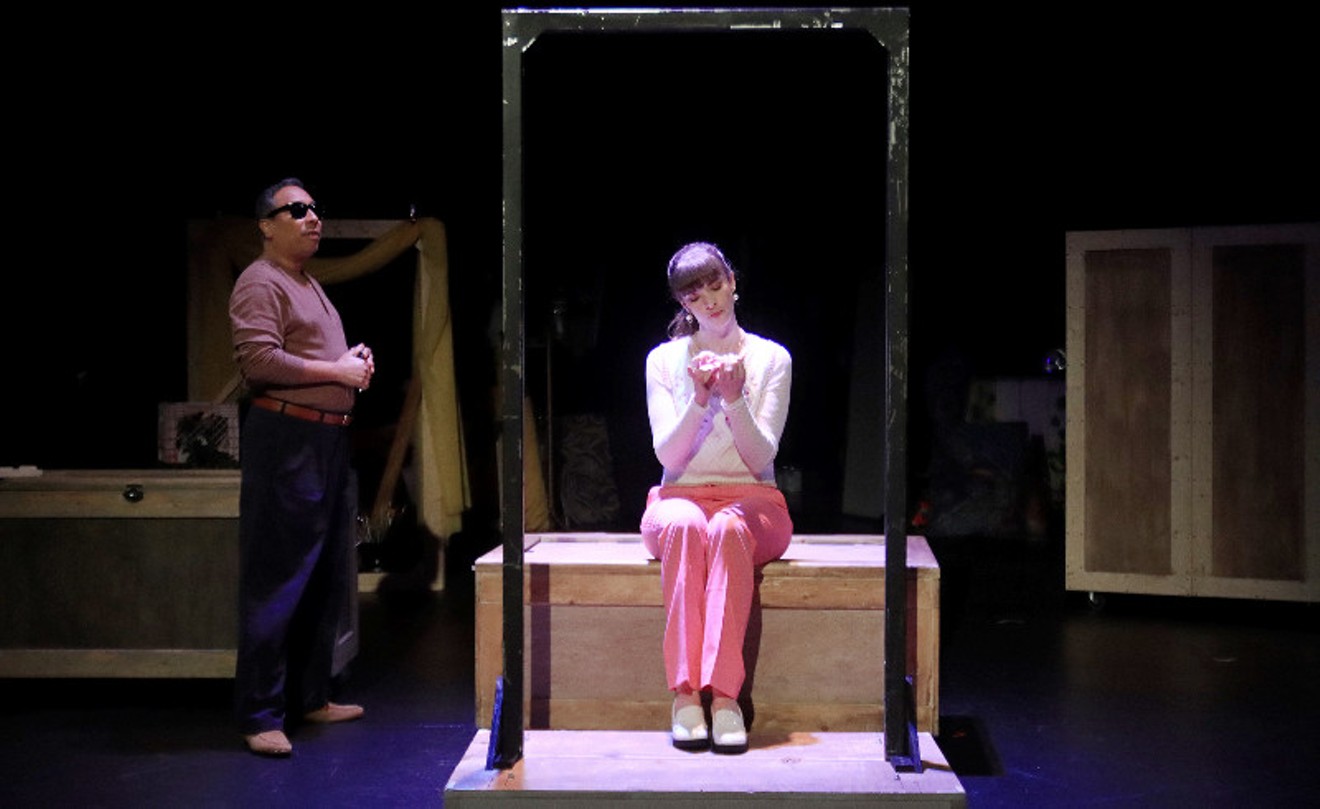 
Lady Sneerwell (Lindsay Ehrhardt) and her low-rent henchman Mr. Snake (Ronnie Blaine) plot their machinations right at the beginning of Richard Brinsley Sheridan's School for Scandal by walking through the DeLuxe Theatre's auditorium and into the aisles. Patrons swing their legs out of the way, some stand up to let them freely pass, while the two continue their conversational mischief unconcerned for those they're disrupting. It's an appropriate visual for the social disturbance they will eventually cause. They don't care. They relish the commotion. Lady Sneerwell thrives on it.

This is the guiding principle of Sheridan's gimlet view of his Georgian upper-class world – one of gossip and intrigue, snark and bite, dish and slander openly mocked in elegant drawing rooms and candle-lit libraries with wit and epigrams brandished instead of rapiers and pistols. This is a comedy of manners, the comedy of manners, a masterpiece of form, character, dialogue, plot.

A huge hit at its premiere even among the audience it skewered, it propelled Sheridan into superstardom and secured his place as the most famous playwright of his time. The Rivals, his prior play, had made his reputation, but School made his fortune. That he would eventually lose it all, dying under a mountain of debt, even after 32 years as a member of Parliament and owner of London's Drury Lane Theatre, is subject for another play, but in 1777 he had the world at his velvet-slippered feet.

In Classical Theatre Company's sumptuously inventive production, there are no candles, books, furbelows, quill pens, silk flounces, all the accouterments you might want in a late 18th-century play. Nay, good sir or madam, we find ourselves on an ordinary stage strewed with the detritus of playacting. There's that ubiquitous stage ladder, wheeled carts, wardrobe trunks, light stands, and all manner of props piled in the corners. We can see through to far upstage where more stuff is stored. And the 16 original characters in Sheridan will be played by an acting sextet, doubling then tripling the parts.

But don't fear, we're in most capable hands, for the director and adapter is Philip Lehl, one of Houston theater's gold standards. Certifiably one of our finest and most perceptive actors, Lehl is a distinctive director, witness his last work for Classical, Thomas Heywood's Jacobean picaresque adventure, The Fair Maid of the West. Consider Scandal as bookend. Again he lets his imagination soar, and we are treated to a meta-theatrical modern-dress romp through Sheridan's overlapping, multi-plot knotty design.

Though Sheridan supplies enough bitchy comedy to make Oscar Wilde swoon, Lehl adds his own particular brand of humor in brilliant little touches like having the character of innocent ingénue Maria enacted by a Barbie doll, manhandled by all; or Mrs. Candour, the gossip of gossips (Ronnie Blaine, loopy and fey) who bares one of his shoulders on his long-sleeve tee to create a fetching fashion look and totes her stuffed pet dog in a little carrier. Later, he'll bark when she leaves in a harrumph. There's a mini version of Mission Impossible – with its iconic theme and searchlights – when Sir Teazle's butler, with a Ken doll in tow that's dressed in black like a valet, clamors over the furniture, somersaults through the air, all to fulfill a minor order. When Lady Teazle interrupts hypocrite Joseph (John Johnston) putting the make on Maria, she proclaims, “Child, you are wanted in the next room,” and flings Barbie into the wings. Silliness raised to high standards.

The cast of six play beautifully together without succumbing to any more artifice than Sheridan requires. Elissa Cuellar, as Lady Teazle, is a modern young bride to old Sir Teazle (Lehl). Their love/hate battle scenes are a joy to watch and hear, as each jockey for the upper hand. “Well though I can't make her love me,” he says with a twinkle, “there is certainly a great satisfaction in quarrelling with her; and I think she never appears to such advantage as when she is doing everything in her power to plague me.”

Ehrhardt is snobbery personified, dripping her bon mots like cultured pearls. Danny Hayes, a newcomer to Houston theater through the British stage and BBC, is a real find. As dissolute brother Charles, Hayes limns him with finely tuned mannerisms and lilting voice. We want to see more of him soon. Johnston, as Charles' brother Joseph who pretends to be good and sensitive, is finally exposed for the fool he is, sputtering his ill will to the end. And Lehl, of course, whether confused doddering Sir Peter or a toothsome Sir Benjamin, a toadying student of Lady Sneerwell's scandal school, always finds the right way to phrase a quip or express befuddlement in an original surprising manner. His naturalistic approach is a primer in technique.

I believe that Classical Theatre's sterling contemporary production of Sheridan's masterpiece is the play's Houston premiere. The Alley or Main Street have never performed it, so who else would have been the perfect fit? Welcome to the Bayou City. If you think The Duke of Sussex's autobiography Spare is replete with gossip and backbiting, wait until you see School for Scandal under Lehl's masterful direction. You ain't heard nothin' yet.

The School for Scandal continues through January 28 at 7:30 p.m. Thursdays and Monday, January 23; 8 p.m. Fridays; 8 p.m. Saturdays; and 2:30 p.m. Sundays (with post-show talkbacks following the Sunday matinees). The DeLuxe Theater, 3303 Lyons.. For information, call 713-963-9665 or visit classicaltheatre.org. $10 - $25.
KEEP THE HOUSTON PRESS FREE... Since we started the Houston Press, it has been defined as the free, independent voice of Houston, and we'd like to keep it that way. With local media under siege, it's more important than ever for us to rally support behind funding our local journalism. You can help by participating in our "I Support" program, allowing us to keep offering readers access to our incisive coverage of local news, food and culture with no paywalls.
Make a one-time donation today for as little as $1.