Alley Theatre's Sense and Sensibility: A Well-Crafted Unmasking of Convention 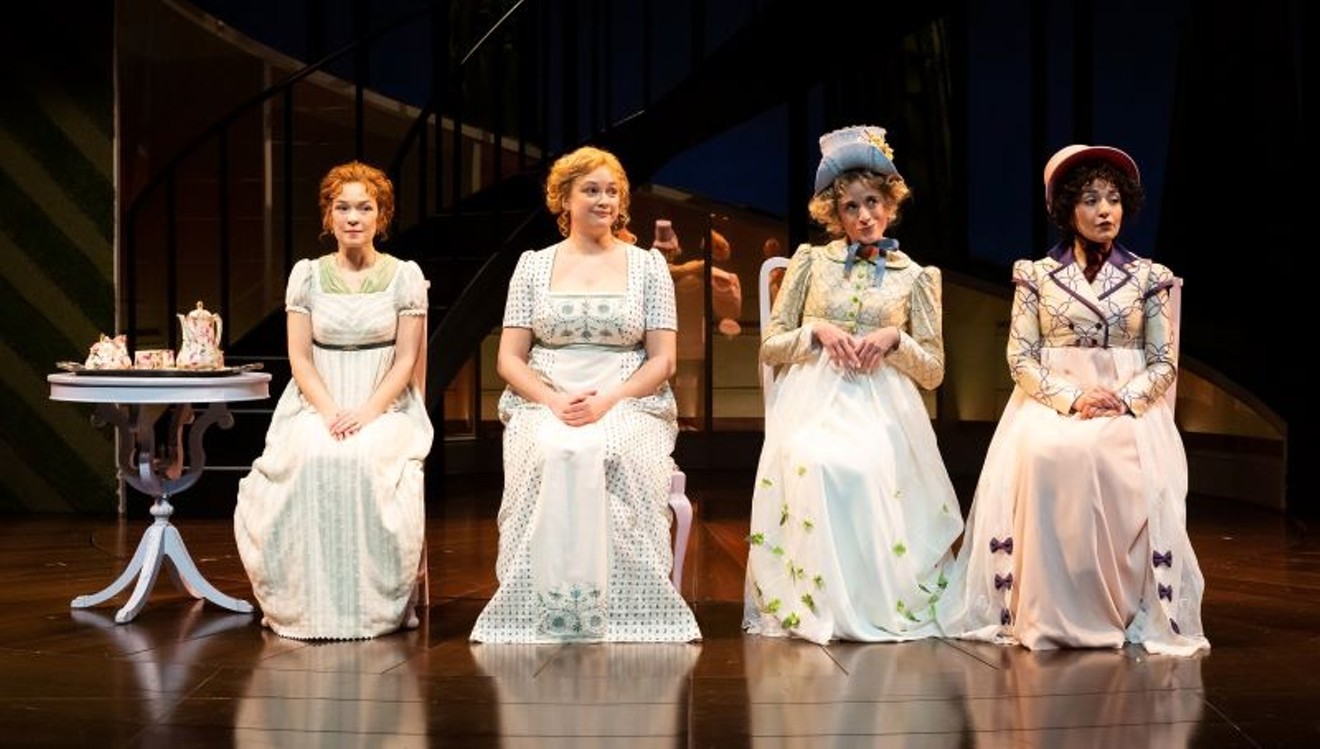 Women struggling to survive in a world where a husband was a necessity. Photo by Lynn Lane

Face masks are now optional at the Alley Theatre and several other theaters throughout town. Many patrons may want to wear them for the foreseeable future for safety and health reasons, but I can attest to the liberation one feels to be without them.

As long as we're unmasking, who better than Jane Austen to do it. She was a master at it. Pricking convention and using a light touch, she uncovered the hypocrisy beneath the smug attitude of her era and laid it bare. With wit and elegance, her plots fly high, her characters real and true.

The Alley Theatre's production of Jane Austen's Sense and Sensibility, lovingly adapted by Kate Hamill, is a delight in every way. All Janeites, those Friends of Jane, will be heady with excitement. This show is catnip. It's also catnip for all theatergoers, through its intelligence, wit, and considerable charm in staging and overall production. It's stylish and well-crafted, much like the needlepoint samplers all Dashwood women embroider when not playing the pianoforte, or maneuvering around the restrictive sexual mores of Regency England and its lawful disregard for the female species.

Miss Austen, who never married, was perhaps England's first feminist writer. She was certainly its first distaff social critic, whose dry irony and acute social observations tweaked the male ego and gave it its first punch in the arm. Her novels, all published anonymously or under the title “By a Lady,” showed the virile gentility what power and knowledge there could be in the female point of view.

Austen was ahead of her time. Her six novels, now considered classics, were somewhat successful during her lifetime, but after her death in 1817 her perceptive dissection of daily life was finally regarded with the esteem it still possesses. In fact, Austen's fame and respect grows stronger every decade, speaks to us in new ways, is richer than ever. Pride and Prejudice is her masterpiece, but others argue for Northanger Abbey, Emma, Mansfield Park, Persuasion and especially Sense and Sensibility. She's up there with Dickens.

Sense and Sensibility, her first novel (1811), is the primer of all things Austen. She uses humor as the arrow to pierce male vanity and female “silliness.” What better way, she argues, to confront the world she knew. She understood perfectly well that a young intelligent woman without inheritance didn't stand a chance. Even a strong independent one like Austen couldn't make a living as a writer – that was unthinkable in Regency England. If a father or brother or other male relative couldn't provide, one needed a husband who could.

That's the dilemma the Dashwood family discovers when dad suddenly dies. His property must go to a male heir, who happens to be the son of dad's deceased first wife. Greedy and prodded by his parvenu wife Fanny, the stepbrother kicks the family out of their home and renders mom and her three daughters without a dowry and therefore without future prospects. In this society, a woman without means is a woman unseen. This is classic Austen territory. (If you know Lauren Gunderson and Margot Melcon's Main Street Theater's Christmas productions, Miss Bennet and The Wickhams, both clever sequels to Pride and Prejudice, you know the troubles that impoverished daughters must face and overcome.)

Playwright Hamill compacts the tale to showcase two of the Dashwood sisters, the sensible Elinor (multi-faceted Elizabeth Bunch) and the impassioned Marianne (spirited Melissa Pritchett). Using many short scenes, Hamill distills the romance to highlight the antique period with a contemporary gloss, never losing the fragrant language or the convoluted social norms whose etiquette was as strict as the Empire gowns were loose.

Dandies and cowards, battle axes and Sloane Rangers, misplaced or unrequited lovers, all play a part in this chess game of the heart. Glances, a reverential bow, a slight kiss on the hand might be misunderstood, misconstrued, or overstated. Usually all of the above. Looking for love leads the sisters into untrodden country. All is ripe for gentle humor, as it was for Austen, and the Alley's production, directed with deft assurance by Adriana Baer, is rife with it.

Except for the two sisters, the other nine actors play multiple parts with infinite variety. You're never sure who's going to enter as butler, maid, society matron, or scene shifter. Todd Waite, as overweening stepbrother John, suddenly appears as corseted silk-encrusted Lady Middleton. Watch as she descends Michael Locher's spiral staircase, glass in hand, the other hand cocked just so, to deliver her punch line riposte and then exit ceremoniously through the topiary, her hand still cocked, while the scene in front continues. It's one of the grandest comic entrances/exits I've seen in a long time. It's so perfectly delicious, you want more of her. (Lady Bracknell, maybe?)

Everybody has a ball. Dylan Godwin sparkles as cad Willoughby; Chris Hutchison demurs as shy Colonel Brandon, then harrumphs imperiously as Mrs. Ferrars; Laura Kaldis is pure teen glee as youngest sister Margaret, then prattles mindlessly as Anne Steele; David Rainey channels Dickens' Fezziwig as exuberant Sir John; Christopher Salazar doubles as stalwart Edward and his obnoxious brother Robert; Michelle Elaine preens as Fanny, then explodes as gossipy Mrs. Jennings; Briana Resa (covering Christine Friale) exudes maternal warmth as dutiful Mrs. Dashwood; Melissa Molano prattles as dim bubble-head Lucy Steele. All of them mix and match as the Ensemble, like the “Venticelli” in Amadeus, the gossips of society, who spy behind their opera glasses and comment waspishly on the action.

There's a glow to this production, an aura around a show well done. Kevin Rigdon's lighting softly radiates with neon accents; Hunter Kaczorowski's apt period costumes waft like muslin; and Michael Locher's topiary background and sweep of greenery limn his tiered “flex set” – the last Alley production to use this Covid-inspired unit set. (It's time for a new look.) The background music of spiky contemporary string quartet (?) is uncredited, but it sweetly rocks with the modern flavor of Hamill's adaptation.

Austen's charms and insights align in fine form in this Alley production. There's both sense and sensibility. Dear Jane, you're looking good.

Sense and Sensibility continues through March 27. At 7:30 p.m. Tuesdays through Thursdays and Sundays, 8 p.m. Fridays and Saturdays and 2:30 p.m. Saturdays and Sundays at the Alley Theatre, 615 Texas. Masks optional. For more information, visit alleytheatre.org or call 713-220-5700. $28-$91.
KEEP THE HOUSTON PRESS FREE... Since we started the Houston Press, it has been defined as the free, independent voice of Houston, and we'd like to keep it that way. With local media under siege, it's more important than ever for us to rally support behind funding our local journalism. You can help by participating in our "I Support" program, allowing us to keep offering readers access to our incisive coverage of local news, food and culture with no paywalls.
Make a one-time donation today for as little as $1.