Reviews For The Easily Distracted:
She Said

Describe This Movie In One Henry Steele Commager Quote:


HSC: This is what really happened, reported by a free press to a free people. It is the raw material of history; it is the story of our own times.

Rating Using Random Objects Relevant To The Film: 4 Uma Thurmans out of 5.

Miramax
Tagline: "Will you go on the record?"

Better Tagline: "Christ, what an asshole."

Not So Brief Plot Synopsis: New York Times reporters Jodi Kantor (Zoe Kazan) and Megan Twohey (Carey Mulligan) work together to expose Hollywood producer Harvey Weinstein's systemic abuse of actresses and employees while he was the head of movie studios Miramax and The Weinstein Company.
"Critical" Analysis: The list of great newspaper movies isn't a long one. All the President's Men, Spotlight, Absence of Malice, Shattered Glass, The Paper (and probably Zodiac and Citizen Kane if we want to be elastic about it). The best ones are those which follow a real-life story, because reality is almost always more compelling (or more horrific) than fiction.

Structurally, though, they're all pretty similar: reporters follow leads and attempt to overcome institutional and bureaucratic obstacles, eventually exposing wrongdoing or corruption with a story that leads to tangible consequences for the perpetrators.

Maybe that's why there aren't that many of them.

She Said is, on its face, about how two New York Times reporters exposed Harvey Weinstein's decades of abuse and harassment, helping to kick off the #MeToo movement and the dialogue/debate about victimization and marginalization that continues to this day. But director Maria Schrader and screenwriter Rebecca Lenkiewicz cannily take us inside Kantor and Twohey's own lives and experiences to make the film much more personal.

Twohey, for example, is struggling to recover from the recent birth of her first child, and ironically finds solace going back to reporting on stories like Donald Trump's sexual misconduct. Kantor has her eyes opened by the growing number of women with stories to tell, yet are still (understandably) reluctant to go public.

She Said is also about the broader choices women face, from Weinstein's victims coming forward to confront entrenched power structures to Kantor and Twohey juggling their work and family lives, something Woodward and Bernstein never had to deal with.

It's easy to come away from She Said feeling overwhelmed, almost to the point of incredulity. There's an almost throwaway scene where a bro at a bar won't leave Twohey, Kantor, and editor Rebecca Corbett (Patricia Clarkson) alone that almost feels like overkill. Except ... that's exactly the point. 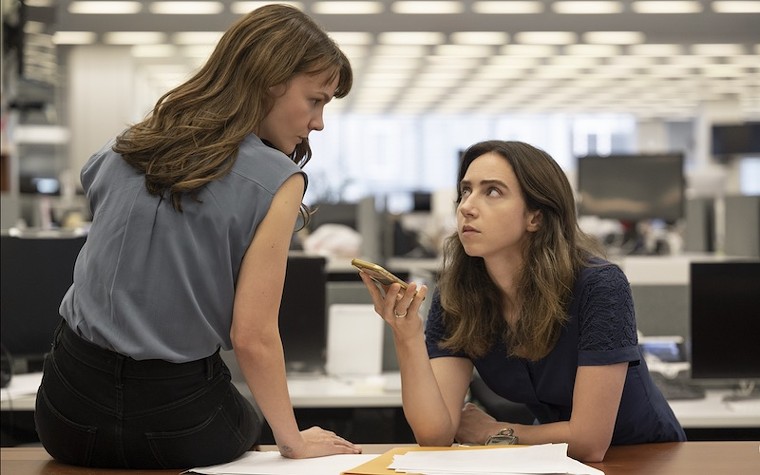 Universal Pictures
Any sense of justice we feel at knowing Weinstein will never breathe free air again is mitigated by the fact that the frameworks designed to protect him and others like him are still largely in place. The lawyers, media, studios, and PR companies that worked for years to shield Weinstein with settlements and NDAs haven't gone away, and one could argue the only reason he was only caught in the first place because he'd become so brazen in his actions and uncaring about consequences.

Schrader and Kazan bring this to the fore in one of the film's climactic moments, as the Times is about to file the story without a named source, until Ashley Judd (playing herself) agrees to come forward. If Judd — an A-lister before Weinstein got to work — was that hard to convince, imagine the fear and uncertainty felt by the interns and assistants.

There's some heartbreaking work done by Jennifer Ehle, playing Laura Madden, assaulted by Weinstein in 1992, and Samantha Morton as Zelda Perkins, a production assistant who was one of the few to stand up to the producer when he assaulted her co-worker Rowena Chiu (Angela Yeoh).

The actual recordings of conversations with Weinstein played over ominously empty hotel hallways and Kantor and Twohey's dawning realization of the scope of his crimes only reinforce their enormity. She Said is a lot like Spotlight in that the full extent of the damage will never fully be known.

Because Weinstein is one guy, but hardly alone, and when you stop to consider the number of lives destroyed by men abusing their power, whether in Hollywood or the Catholic Church or virtually any other industry on the planet, the schadenfreude one experiences when someone like Harvey Weinstein gets taken down is fleeting indeed.

She Said is in theaters today.
KEEP THE HOUSTON PRESS FREE... Since we started the Houston Press, it has been defined as the free, independent voice of Houston, and we'd like to keep it that way. With local media under siege, it's more important than ever for us to rally support behind funding our local journalism. You can help by participating in our "I Support" program, allowing us to keep offering readers access to our incisive coverage of local news, food and culture with no paywalls.
Make a one-time donation today for as little as $1.