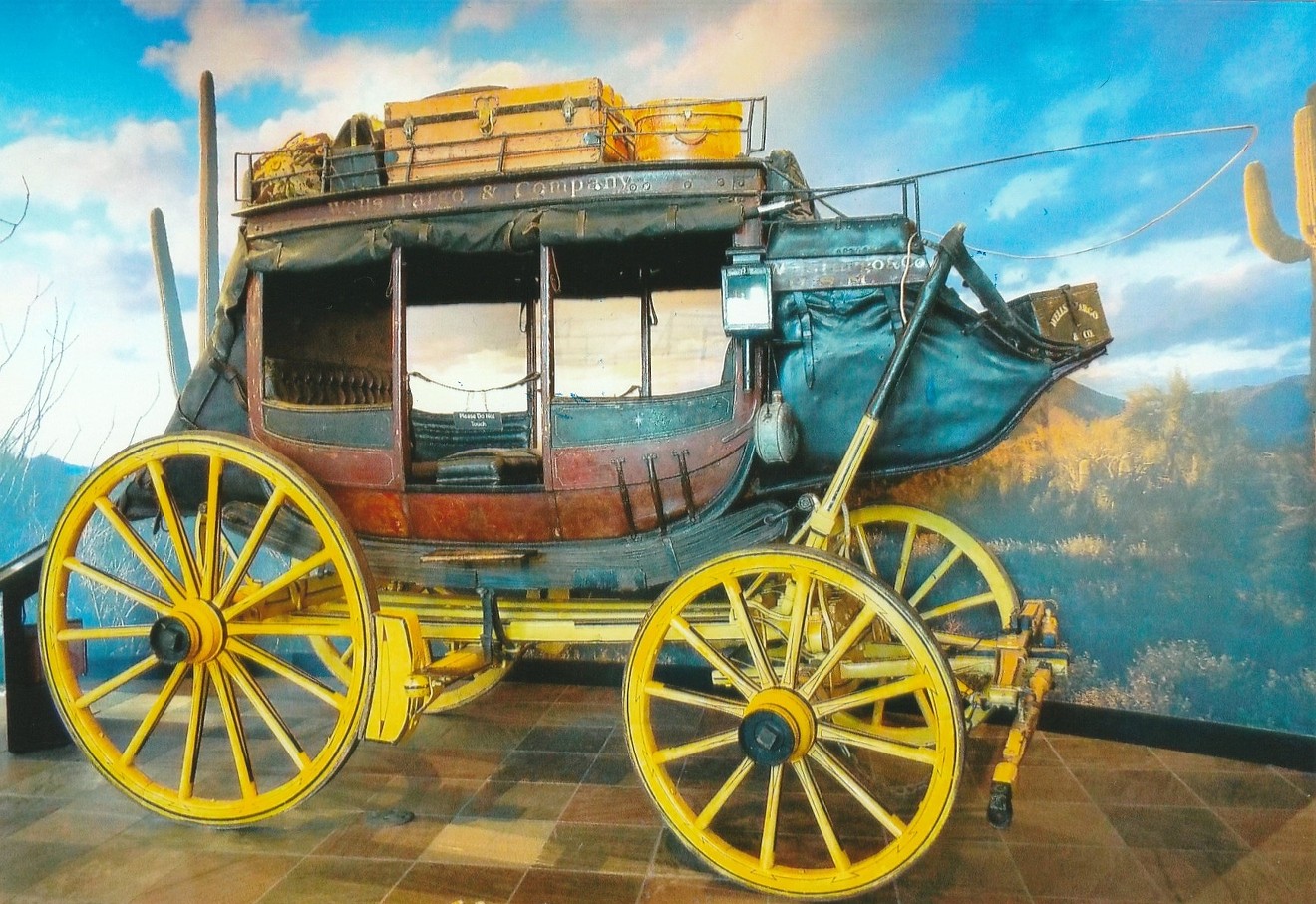 This 1860 Wells Fargo coach was on display in the Wells Fargo Museum in Phoenix, Arizona. Marine 69-71/WikiCommons
Shotguns and Stagecoaches: The Brave Men Who Rode for Wells Fargo in the Wild West
By John Boessenecker
368 pp.
$29.99
Thomas Dunne Books

Anybody who’s seen an old western movie knows how a stagecoach robbery went, right? A desperate driver pushes his galloping horses across the open prairie while someone onboard exchanges rapid gunfire with a band of desperadoes riding alongside on their steeds, hoping to get their hands on the riches being transported inside the clattering vehicle. Right?

Well it turns out that it’s another John Fordian-case where the impact of romantic myth has overtaken historical reality in contemporary minds. In truth, most stagecoaches carried mail, packages, and people across the land. And for those that did carry large amounts of money for banks or individuals, the preferred method of robbery was for bandits to wait until the driver had to get out of the cab to walk his horses down steep or shaky ground – and then pop up with guns drawn and an exclamation that likely did not include the phrase “Stick ‘em up! Your money or your life!” Book cover
With its origins in the days of the Gold Rush, no company was more involved in these types of monetary movements than the Wells Fargo company. And – as Old West authority and author of multiple books on the subject John Boessenecker relates here – sometimes the men guarding the locked money boxes were as fierce, unforgiving, and brutal as the men who aimed to take them.

“Wells Fargo followed the money, and robbers followed Wells Fargo,” Boessenecker writes in the introduction. “The connection between commerce and crime was never more evident.” And he proves that in this expertly researched and lively work.

Rather than pen a streamlined history, though, Boessenecker instead profiles 20 of the men who worked as armed escorts or detectives for the company, fleshing out their exploits and adventures while in employment with stories of their very, very colorful lives before and after.

And while many of these stories seem like the work of fiction or dime store novelists, they’re not. Henry C. Ward really did have a stray Irish Setter dog named “Pony” who ran alongside his coach seemingly with limitless energy for nearly a decade.

Though not all of the Wells Fargo men survived the dangers of their occupation. Buck Montgomery was killed in a robbery led by the charismatic Ruggles Brothers. And while besotted ladies sent the handsome outlaws notes, cakes, flowers, and fruit to their jail cells, a vigilante mob hung them as an act of revenge for the beloved Montgomery. Other Wells Fargo men may not have caught their targets red-handed, but were able to track them down and bring them to justice afterward.

When the days of stagecoaches led into the era of riskier train robberies it barely put a dent in the inevitable attempts at grabbing some easy money. But the era of Wells Fargo as service ended in 1918 as World War I raged and the federal government merged all express companies (Wells Fargo was not the only one, just the best-known) into one entity.

But even as the company morphed into a regional – then national – banking institution, Wells Fargo held onto its Wild West image, using a stagecoach on its logo and playing off its frontier heritage while keeping tight control over its image and history.

When it was revealed last year that the company was responsible for one of the biggest banking scandals in American history—creating 1.5 million fake accounts and more than 500,000 unauthorized applications for credit cards for its customers to inflate sales figures—a lot of trust was lost. And if you’ve seen any of their mea culpa TV commercials recently, Wells Fargo is desperate to regain consumer trust.

The future of Wells Fargo won’t likely look to the past: Don’t expect that the company will revert to transporting large sums of money via stagecoach or Segway or Tesla. But while teenagers for decades have used the term “riding shotgun” to delineate getting the seat next to the driver, to the “shotgun messengers” of Wells Fargo, it meant something wholly different. For those grizzled and hardened men were packing deadly weapons, not Bud Light Tallboys.
KEEP THE HOUSTON PRESS FREE... Since we started the Houston Press, it has been defined as the free, independent voice of Houston, and we'd like to keep it that way. With local media under siege, it's more important than ever for us to rally support behind funding our local journalism. You can help by participating in our "I Support" program, allowing us to keep offering readers access to our incisive coverage of local news, food and culture with no paywalls.
Make a one-time donation today for as little as $1.