Stray is the Most Delightful Game of 2022 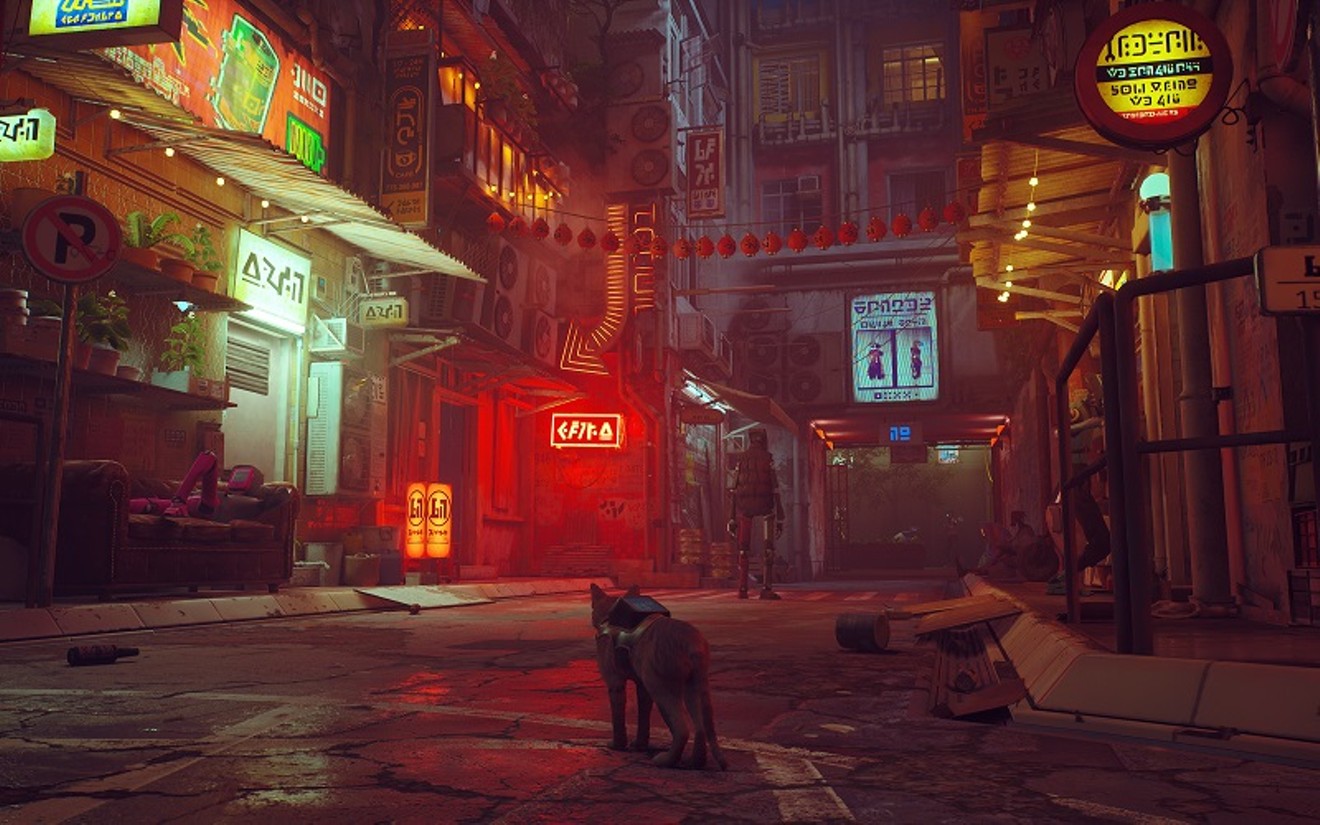 Be a cat? Sold! Screenshot
Ever since developer BlueTwelve Studio announced Stray at the Future of Gaming event two years ago, it’s been one of the most hotly expected games on everyone’s radar. The premise was simple: you’re a cat wandering around a dystopia, solving puzzles like a cross between Homeward Bound and City of Lost Children. Frankly, the odds of it actually living up to the hype were long. Luckily, the end product is one of the best games of 2022.

You play as an unnamed cat of no specific gender, part of a small family of cats that live in the overgrown ruins of a former human civilization. When the cat misses a jump, it falls into a sealed slum full of trash, meat-eating bacteria the size of rats, and a village of robots who are all going through an existential crisis after centuries of being abandoned by their human creators. The appearance of the cat prompts them to once again try to find their way to the mythical place called Outside.

Mechanically, the game is a hodgepodge of adventure game tropes. There are light puzzles, exploration mostly based on verticality as the cat climbs higher and higher in the slums, some stealth and trickery-based combat, and a whole lot of talking to people (well, them talking to the cat and its amnesiac drone companion). The developers are clearly fans of Gone Home and Life is Strange, overtly referencing the first one in some dialogue and borrowing an early puzzle involving paint cans from the second. None of this is revolutionary, but the mixture turns it into a potent cocktail. If Elden Ring represented the best parts of all open world combat games combined, Stray does the same for modern adventure games.

What makes Stray so brilliant and fun to play is how dedicated the design is around its main character. You are a cat, and this is the cattiest cat outside the one in your house. You can claw trees, bake biscuits, knock boxes off of tables, trip people by getting under their feet, meow constantly, and the entire world is built for the cat to climb on.

There’s this scene near the beginning where your drone companion, B-12, puts a harness on you it can charge and ride in. For a few minutes after, the cat responds badly to the controls, slinking uncomfortably and resentfully until it finally gets used to it. There’s no point to it, but it helps cement the catness perfectly, as does a bit later when you can stick your head in a paper bag and the controls are briefly reversed.

It’s amazing how many little problems with character design the cat effortlessly fixes. It doesn’t have to talk to itself to explain things to the player or build narrative through dialogue because it’s a cat. You can totally curl up and go to sleep in the middle of levels, the controller gently buzzing with the cat’s purr, because that’s what a cat would do. There is more personality in Stray than in half a dozen other game main characters combined simply by committing completely to the design of the cat. By comparison, most other games seem like their main character is almost an afterthought.

Hardcore gamers probably won’t enjoy the way movement works. The cat can run freely, but all jumping is closer to a point-and-click puzzle than a traditional jump navigation. This makes it impossible to fall off of things and lose progress, but it can get a little awkward in places where the cat has to avoid enemies quickly and escape. It’s not hard by any measure, but you sometimes end up fighting the camera and controls more than the bacteria.

Playing Stray is pure joy. From the lovable protagonist to the weird robot village to the crumbling city, it mixes quirk with solid design and despair with hope. Every character is delighted to see the cat from Outside, and it makes them want to strive for something bigger than themselves. As you climb up corrugated roofs and air conditioning units, its truly feels like you’re rising out of the dark and back into the light. While it may lack challenge, it makes up for it in fun.

Stray is available today on PlayStation 4/5 and Steam for $29.99.
KEEP THE HOUSTON PRESS FREE... Since we started the Houston Press, it has been defined as the free, independent voice of Houston, and we'd like to keep it that way. With local media under siege, it's more important than ever for us to rally support behind funding our local journalism. You can help by participating in our "I Support" program, allowing us to keep offering readers access to our incisive coverage of local news, food and culture with no paywalls.
Make a one-time donation today for as little as $1.