If Cecil B. DeMille and Flo Ziegfeld produced a holiday show, it would look suspiciously like Stanton Welch's Nutcracker for Houston Ballet. It is lavish and lush the DeMille way, with solid sets and fantastical costumes, and for Zeigfeld, there are legs for days and more dancing than usually seen in this seasonal cash cow. Some of the gams may be hidden under gowns of tulle bedewed with flower petals, as in the Waltz of the Flowers, but there's the Sugar Plum Fairy's long line, etched to the sky, that showcases the grace under the athleticism, and the four soloist Snowflakes who skim the stage in their diagonal jetés and pirouettes as if dancing on ice.

Starting with the proscenium ringed by holiday bowers and plump cherubs, what's not to admire in Tim Goodchild's precise ornamentation. Even the golden gates to the Kingdom of the Sweets are as finely wrought as the entrance to Vienna's Schönbrunn Palace. The Queen of Snow dazzles in sharp icicles like out of Narnia, while the attacking rat soldiers look like Samurais.

And those Land of the Sweets' animal ambassadorial avatars in the second act divertissements are radiantly realized: the African lion in emir's caftan bearing coffee; the panda in Chinese pajamas bearing tea; the comic frog who ushers in a petulant and hungry Louis XIV; the English bulldog with Churchillian cigar who brings salty caramels; the Russian wolf in Cossack splendor who brings candy canes; the snorting bull of Spain who bears chocolate gifts. There are wonders everywhere: waddling penguin guards, courtiers in macaroon headdress, pirate accomplices for mysterious and dangerous Dr. Drosselmeyer, whose magic infuses the show.

But the real wonders explode in the dancing. Except for specific effect, Welch eschews stasis. The ballet is built for movement, and the stage is alive with it. Characters don't walk so much as glide or lightly step. Why walk when you can prance; don't run, chassé. Welch's choreography gives the characters their character. And those patterns. No contemporary choreographer knows his way around a stage like Welch. Marvel at the 3-D effects he creates in the Waltz of the Snowflakes; it's like looking at a blizzard, all swirling in ever-enlarging circles with crisp delicate pointe work. The snowflakes toss handfuls of snow as they enter, a marvelous effect.

Due to pandemic restrictions, the ballet's been trimmed of children under twelve, which was one of this version's pleasures. Welch used Nutcracker as training ground for even the youngest students, giving almost every member in the school a chance to be on stage and experience a live performance before an audience. It's invaluable training. But this time, no kids, so most of the scenes have been pared to the essentials: the Shepherdess fends for herself, no little lambs to shelter from the crafty foxes; no snake charmers with handpuppet snakes to augment the sinuous Arabian; no little rats charging down the aisles to go into battle; no cast of thousands.

But the stage is full of quality; for the Houston Ballet is one of the great ballet companies in the world. Welch rotates the casts in Nutcracker for the same reason he uses the little ones: more exposure and more time on stage. With 40 or so performances, time off is needed. The cast I saw will be different from the cast you see, but it will be just as splendid. Clara's Christmas tree still grows like a sequoia, the snow falls in the theater, the glorious music of Tchaikovsky eternally charms, while the beauty and wonder that is ballet will make you young again.

The Nutcracker continues through December 24 at 7:30 p.m. Thursdays through Saturdays and also Monday through Wednesday December 20-22; 6:30 p.m. Sundays and 2 p.m. Saturdays; with 2 p.m. performances also scheduled for December 20-24 at the Wortham Center, 501 Texas. Audience members are required to wear masks at all times unless they are eating or drinking. For more information, call 713-227-2787 or visit houstonballet.org. $27-$200. 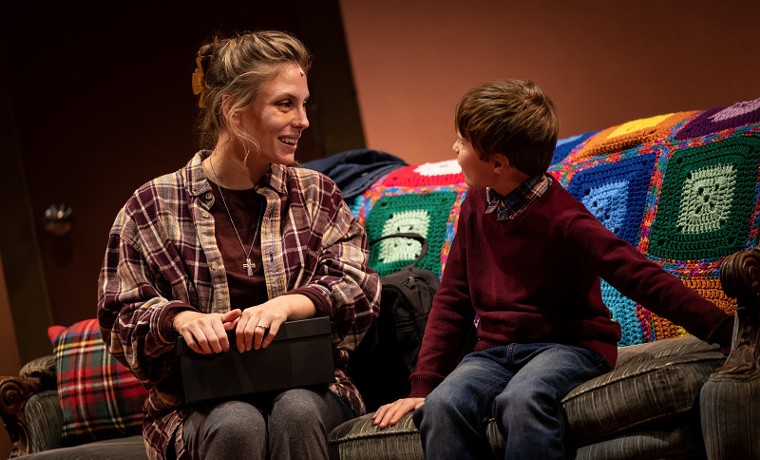 Theresa Zimmermann shines as the dying mother. Seen here with Jackson Dean Vincent as her son.
Photo by Joey Watkins
The Christmas Shoes

Bring your hankies, lots of them, for you'd be a real Scrooge is you're unaffected by A.D. Players' world premiere adaptation of The Christmas Shoes.

As you may know, Shoes began as a country song by the Christian group NewSong in 2000. Not in the Christmas mood, the narrator waits impatiently in line at a store, interrupted by a young boy eager to buy his mother a pair of shoes. She is terminally ill, and the boy wants her to look pretty when she meets Jesus. Desperate to buy them, he doesn't have all the money. When the man offers to pay for the shoes, his epiphany is the true meaning of the Christmas spirit. The record zoomed to the top of the charts in both country and adult pop, garnering a gold classification. If you're not in the holiday mood, you might find this song maudlin and treacly. Wags have branded it “worst Christmas song ever,” but since this is the time of good will toward men, we will cut the song some slack.

One of the songwriters knew author Donna VanLiere, who turned the song into a novel in 2002, expanding the intertwining plot lines. Hallmark bought the rights and produced a TV movie also in 2002, starring Rob Lowe. The film was a rating hit, and two more sequels followed. Now, based on the book, there is this play by Jessica Lind Peterson, commissioned by A.D. Players. It retains the intersecting plot points and adds a few of its own.

It takes a few scenes for the mechanism to budge, but once on a roll, its power to move is fairly unstoppable. There are broad sitcom routines, usually concerning secretary Fern (Kat Cordes), the overworked and emotional fragile assistant to ghost writer Jenny (Michelle Elaine, fresh from Lynn Nottage's Sweat at the Alley), who's a workaholic and demanding boss, but who we'll later learn is in the process of divorce. It's the opening set-up that drags. Lawyer Robert (Thomas Prior) needs help on his memoir and turns to Jenny. You see, years ago he's the man who bought the shoes for little Nathan. This is the story of his reclamation. Jenny likes the manuscript but knows it needs work. She prods Robert into revealing more facts, and so off we go into flashback and Dickens territory.

Three stories are told. Young Robert (John Johnston), with mother issues, is a lawyer on the rise, married to his job, and neglectful of wife Kate (Jeanne Harris). Maggie (Teresa Zimmermann) and husband Jack (Jeff McMorrough), solidly blue collar, have yet to tell their ten-year-old son Nathan (Jackson Dean Vincent) that mom is dying. Meanwhile Jenny shares custody of daughter Annie (Willow Ire) with estranged husband David (Joseph “Joe P” Palmore). Like Robert, her work has taken the joy out of her.

Peterson intertwines the stories. Kate does volunteer hospice care for Maggie; Robert has a rude run-in with Jack at his auto body shop and with young Nathan on the street. Meanwhile, Jenny is coming to terms with her life without David, urged on by Robert's book. There are confrontations and complications, but it's Nathan we're focused on. Vincent is a live wire, totally believable in his scenes of near grief then acceptance, and that's when the sniffles start in the theater. Johnston has an affecting moment all his own when as young Robert he makes amends to Kate. Come to think of it, all of them have moments of charm and grace. Zimmermann is a terrific Maggie, all warm motherly concern over the fate of her son when she's no longer there; McMorrough is solidly protective of wife and son; Harris is wondrously prickly and natural as overlooked wife; Prior is calm and grateful after the error of his youthful ways; and little Ms. Ire is fresh and sassy as a slogan-spouting pre-teen who knows things better than the adults. In smaller roles, Palmore possesses easy appeal, and Wesley Whitson (an indelible Hugo in Mildred's Umbrella's Feathers and Teeth) makes the most out of his walk-on as Older Nathan and obnoxiously gleeful store clerk.

Directed by Philip Hays, the production is visually slick with Afsaneh Asyani's bi-level set and overhead roof gables and Mark A. Lewis's soft amber glow for Nathan's house and bright glare for Jenny's office. There's a lot of God-speak in this play, so atheists might veer toward migraines; but its universal message of being kind, listening to others, and loving those while we can, never offends. With cheeks awash, your heart will get a needed workout

The Christmas Shoes continues through December 26 at 7:30 p.m. Wednesdays and Thursdays, 8 p.m. Fridays, Saturdays and some Sundays; and 2:30 p.m. Saturdays and Sundays at The George Theater, 5420 Westheimer. Masks are required and temperature checks at the door. For more information, call 713-526-2721 or visit adplayers.org. $25-$75.
KEEP THE HOUSTON PRESS FREE... Since we started the Houston Press, it has been defined as the free, independent voice of Houston, and we'd like to keep it that way. With local media under siege, it's more important than ever for us to rally support behind funding our local journalism. You can help by participating in our "I Support" program, allowing us to keep offering readers access to our incisive coverage of local news, food and culture with no paywalls.
Make a one-time donation today for as little as $1.