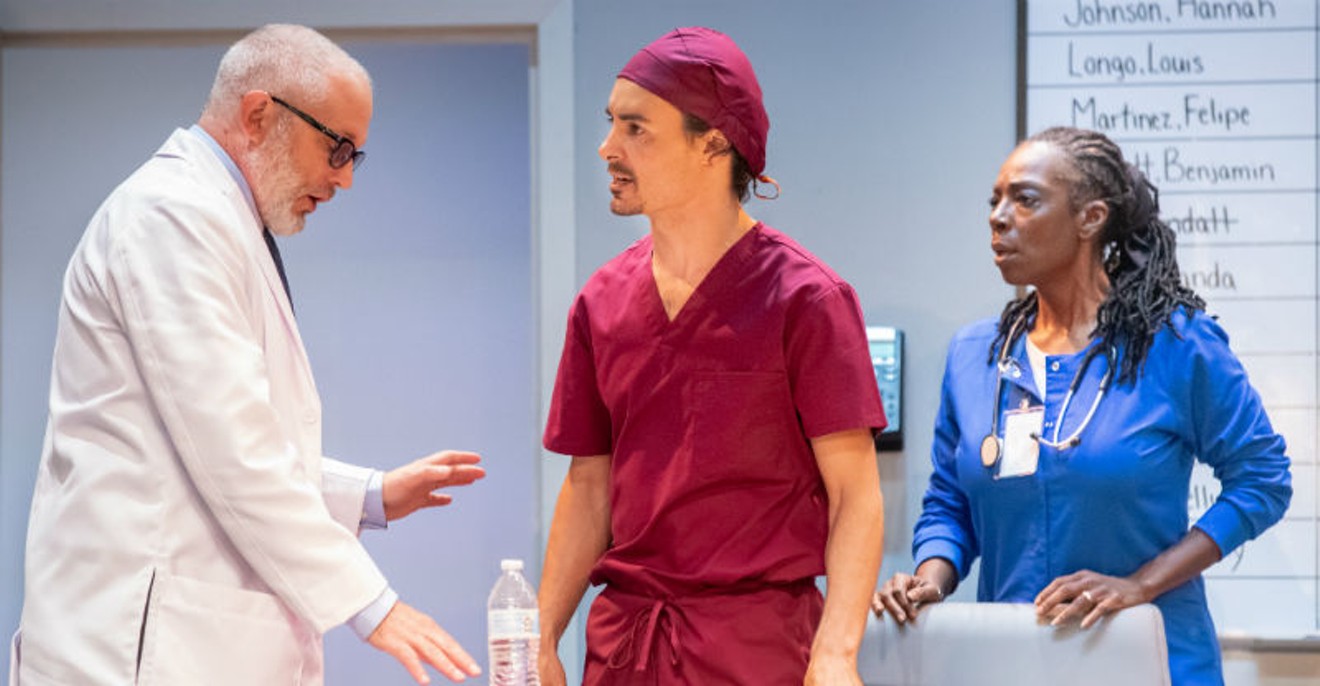 Philip Lehl, Braden Hunt and Kaci M. Fannin in The God Committee Photo by Jeff McMorrough
Mark St. Germain's The God Committee, softly beating at A.D. Players, would fit comfortably on TV. It's made for that size. The play, about the doctors who decide which patient will get a heart transplant, is a bit like 12 Angry Men set at Chicago Med.

The ethical dilemmas each of the seven committee members must confront, though, are small scale. The George stage seems too large. As it is, the production is encased within a frame, which is then encased within the proscenium, making the drama look as though we're watching it on television.

You can't beat the underlying drama. It's only human. How do doctors decide such life or death decisions?

St. Germain attempts to tell us, but each of his characters has only one intractable trait, which doesn't make for scintillating drama. Though dying of cancer, saintly Dr. Jack (Philip Lehl) is old school pro, wise and compassionate. Young hotshot Dr. Gorman (Braden Hunt) is tart and arrogant, without an ounce of bedside manner. Jack's assistant, Dr. Ross (Shondra Marie) is conflicted over the suicide of her daughter and blames herself. In his wheelchair, Piero (Luis Galindo) is the humane social worker, dispensing jokes and wheeling around the stage. Dr. Banks (Christy Watkins) sits on the committee as proxy for a doctor rushing to the hospital with a fresh transplant. She's the innocent one, torn over the ultimate decisions she's asked to make.

The hospital board has demanded that Father Dunbar (Chip Simmons), now a corporate lawyer, also sit in on the proceedings to see that everything is legit to forestall lawsuits. He's also there to make a less-than-subtle case for the board's major donor whose son is on the list. There's big money to be made in transplants. The committee is overseen by nurse Nella (Kaci M. Fannin), kept busy with phones, a wayward intercom, and the noisy St. Patrick's Day parade outside. She's no-nonsense and keeps a cool head.

No matter the merits of the patient they argue over, each member of the committee never varies. Neither does this static old-fashioned play. The heated exchanges among the seven are formulaic at best, because everybody stays well within their own character description, no coloring outside the lines. There are no grand surprises, no haunting reveals. Everyone just gets louder. Yet under director Alice M. Gatling, the actors stay mildly scalpel-sharp even when hobbled by their character's limited range. Galindo, though, has a field day with nonconformist Piero, zipping about and cracking wise. He also sports one hell of a wig.

The drama's given a needed shot of adrenaline by the wobbly devise of the ticking clock. A live heart destined for transplant only lasts six hours outside the body, so this intermission-less play has a mechanical momentum it wouldn't normally have, faux though it is.

Committee gets another needed shot with its atmospheric set by Liz Freese: a modern hospital conference room, all Danish blond wood, coffee station, white filing cabinets. It's antiseptic, classy Ikea. Whether she knows it or not, it mirrors the drama perfectly: cold, efficient, no heart.

The God Committee continues through June 2 at. 7:30 p.m. Wednesdays and Thursdays; 8 p.m. Fridays and Saturdays; and 2:30 p.m. Saturdays and Sundays at. The George, 5420 Westheimer. For information, call 713-526-2721 or visit adplayers.org. $20-$70.
KEEP THE HOUSTON PRESS FREE... Since we started the Houston Press, it has been defined as the free, independent voice of Houston, and we'd like to keep it that way. With local media under siege, it's more important than ever for us to rally support behind funding our local journalism. You can help by participating in our "I Support" program, allowing us to keep offering readers access to our incisive coverage of local news, food and culture with no paywalls.
Make a one-time donation today for as little as $1.