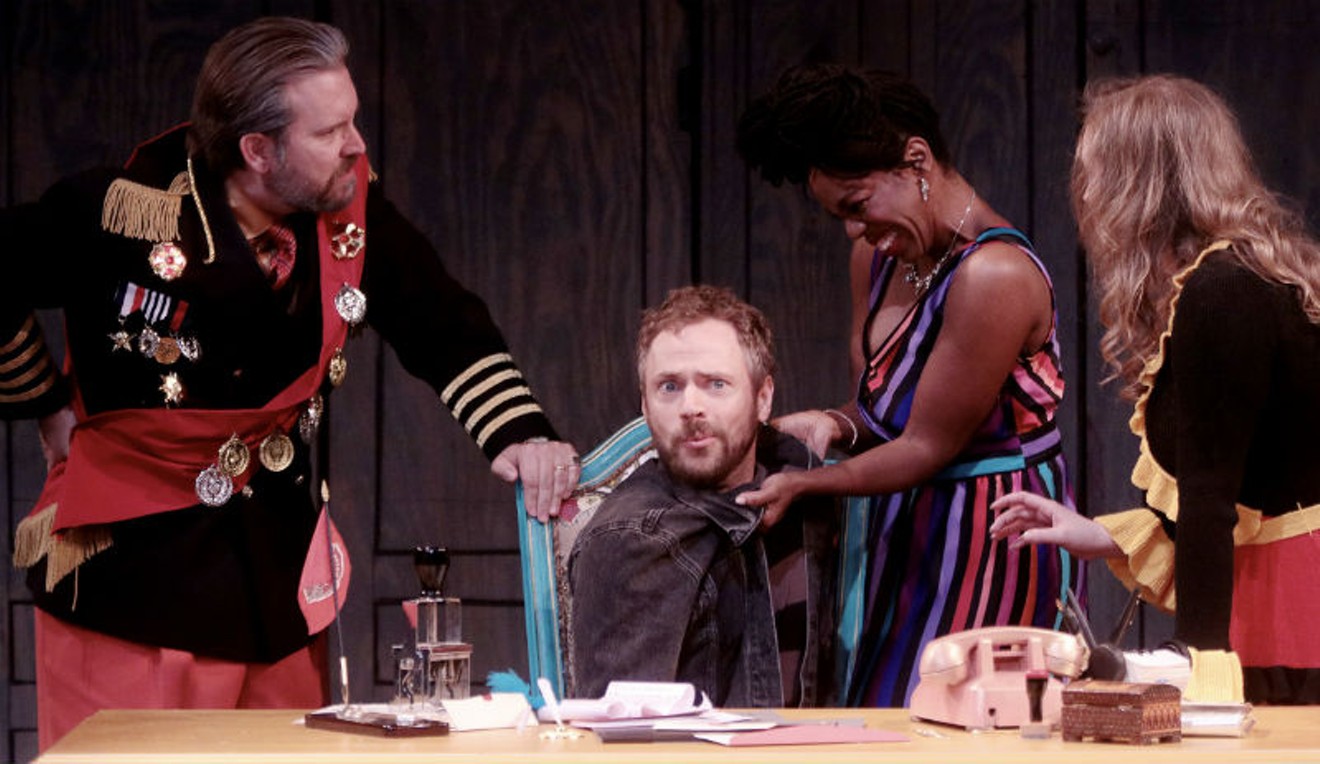 Tom Long as the Governor, Matthew Keenan as Osip, Brittny Bush as Anna, and Bonnie Langthorn as Marya Photo by Pin Lim
Anyone know the Russian expression for “¡Ay, caramba!” How about, “What were they thinking!”

There are many different ways to stage Nikolai Golgol's classic satire The Government Inspector (1836). I'm not convinced Classic Theatre's production is one of them.

The story itself is simple in structure, genius practically. Accompanied by servant (Matthew Keenan), a lowly government clerk (Dain Geist) down on his luck and out of money due to gambling and profligate ways, arrives at a backwater provincial town at the same moment when the town bigwigs are warned that a high-ranking government inspector, sent from the Czar no less and incognito, is coming to report with “secret instructions” on their wayward inefficiency. In panic, the bumbling, inept, and corrupt bureaucrats – the governor mayor (Tom Long), his lackey (Justin Gibbons), the school overseer (Elizabeth Black), the judge (Kregg Dailey), the minister of charities (Benito Vasquez), the postmaster Xzavien Hollins) – mistake this lowly reprobate as the Very Important Person.

They fall all over themselves to ingratiate, cajole, wheedle, and bribe, for if the inspector reports the truth they are doomed. The nebbish little clerk is astonished that everyone fawns over him. The governor's wife (Brittny Bush) and nubile daughter (Bonnie Langthorn) paw him, and young gossips (Lindsay Ehrhardt and Casey Magin) are star-struck. All throw rubles at him. What good luck! He fleeces them mercilessly, takes them for the rubes they are, and hightails it out of town before the game is up. The inevitable ending is one of theater's most endurable closers.

This is surreal farce, a timeless tale of bureaucratic waste, crass humanity, gross stupidity, inflated egos, social inequality. Every human foible gets bumped up to 11. In wicked satire, wily Gogol pokes every eye and kicks every butt. Czarist censors were shocked at such shoddy treatment of their government and banned the comedy. But in one of those wry twists of fate, Czar Nicholas I, an autocrat not known for his sense of humor, read the play and actually laughed. He is reported to have said, “This fellow Gogol makes fun of everyone, but he makes most fun of me.” He lifted the ban and the play made history. This jaundiced prick at the sordidness of mankind has been in the rep ever since, a certifiable classic.

The comedy is akin to farceur Feydeau's, where the characters charge and exit through many doors, only overlaid with themes much darker and more edgy. It's certainly contemporary. Considering that every government has an overbearing, overreaching bureaucracy, and man's venality has been evident since the ancient Egyptians, this play will always be relevant. But must it be staged like the Three Stooges?

Director Philip Hays, whose prior work has an enviable mark of great distinction, goes for the lowest common denominator. He pulls out all the stops, from corny sight gags to cartoony prat falls (although eavesdropping Ehrhardt's crash through the door is epic). He unleashes his actors to go big, and they overplay and overreact onto Montrose Boulevard. They don't chew the scenery, they bulldoze it. The frenzied assault isn't funny, just coarse. Shouting, jumping on the furniture, waving of arms, and silly posing bespeak desperation, not some overall concept. Gogol's cosmic slap might be caricature, but it's finely etched and cuts deep. It doesn't need the Road Runner.

Yet there are glimmers of what might have been. Observe how smoothly Keenan and Ehrhardt play their roles. If the others in the cast followed their lead, you would glimpse a wildly different Inspector. They seem to be from another play. As harried valet Osip and busybody Petra, their naturalness is stylized, for sure, but seems just right. They're subtle and finely tuned in their reactions, smart and observant. They have grace. You wonder how they managed to get away with it, surrounded by such hysteria.

Hays manages to deliver some nifty visual bits: plenty of doors, the petition flying through the window as paper airplane, Ehrhardt's sublimely executed face-first stunt fall, the unfurled banner that gets stuck (I think this was intentional, I'm not sure), the carousel entrance of the townsfolk as the cast doubles and triples as they come in and out in different guises. And the costumes by Rachel Clinkscales are glorious: a primary-color mishmash that has cartoon written all over the harem pants, the faux chubbies, the babushkas, the argyle socks, the patently fake crepe beards. Now this is comedy.

Smothered under all the bluster, Classical Theatre's The Government Inspector never finds its way or a consistent style. Never meant to be a Faberge egg, Gogol never intended it to be an industrial-sized Russian blini, either. Or an anvil dropped on your head. Vodka, anyone?