A rare shot of Mickey (Manuel Garcia-Rulfo) driving himself Netflix
Now that a large portion of the post-pandemic population is still working remotely or in a hybrid situation, is the concept of a defense attorney working out of his automobile less odd? Granted, most of our home office setups are less luxurious than a chauffeured Lincoln Town Car, but it still feels like the novelty has worn off a bit.

Or maybe the problem with The Lincoln Lawyer, Netflix's new series featuring Michael Connelly's L.A.-based mobile mouthpiece, is how it can't hide the series' procedural roots. The new guy also fails to make much of an impression, which is kind of a big deal when the entire show is built around him.

Based on The Brass Verdict, Connelly's second "LL" novel, The Lincoln Lawyer takes place some time after the events depicted in the film. Mickey Haller (Manuel Garcia-Rulfo) is returning to defense practice after several months and a stint in rehab (painkillers). Struggling to get his practice back on track, Mickey learns that he's inherited the caseload of a slain colleague, which includes the murder trial of gaming CEO Trevor Elliott (Christopher Gorham), starting just nine days hence.

Assisting him are his ex-wife Lorna (Becki Newton), who manages the law office and is also involved with Mickey's investigator Cisco (Angus Sampson), an ex-biker (the Road Kings, who have Mickey on retainer, show up again as well). Neve Campbell plays Mickey's other ex-wife Maggie McPherson, a D.A. who works alongside the prosecutor Haller is up against in the Elliott trial.

Fortunately, the show doesn't devote all its time to the main plot. The cases Mickey inherits means there are other sub-threads to explore, and Maggie has her own case as well. And I saw "fortunately" because just about everyone in the show is more interesting to watch than the guy we're supposed to care about. 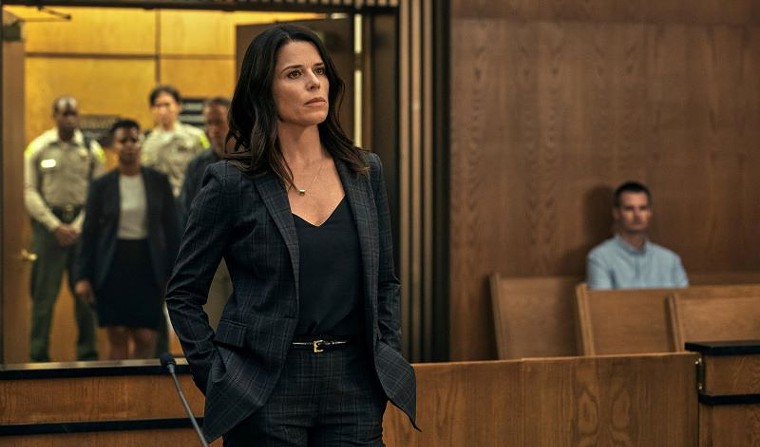 Neve Campbell as prosecutor Maggie McPherson.
Netflix
Mickey, as you recall, was played by Matthew McConaughey in the 2011 movie. It's a tough act to follow, and while I assume Garcia-Rulfo is a perfectly adequate actor (his filmography says he was in the Magnificent Seven remake and Murder on the Orient Express, but I can't remember him in either), he's the least compelling character here. Campbell's Maggie is driven and vulnerable, Newton is feisty and capable, and Sampson (the Organic Mechanic from Fury Road) is appropriately menacing.

And that's without mentioning Jazz Raycole as Izzy, Mickey's new driver who shares some of her new boss' issues and probably gets the most backstory and best arc of the series. Or Elliott Gould, playing Mickey's dad's old law partner, dropping in all too briefly to offer some advice.

Developed by prolific producer David E. Kelley, The Lincoln Lawyer does build some steam as it goes, but the flow of the story too closely resembles the weekly procedural format that was pitched to CBS. There is a twist that maybe isn't (if you've read any other Connelly books) at about the midpoint of the series, and some boobs and F-bombs to justify that Netflix money.

The good news is — according to experts on such matters (my wife) — the legal aspects of the show are pretty spot-on. The logistics of the voir dire sequences are accurate, and some of the best parts come from Mickey sharing trial wisdom with Izzy. Having said that, Mickey himself is as much a lucky sumbitch as he is a "good" lawyer, stumbling over clues or having his teenage daughter nonchalantly point out a key aspect to the Elliott case he totally whiffed on.

There's also the issue of his appearance. Perhaps the show is trying to convey Mickey's rough road to recovery by keeping him unshaven, in rumpled clothes, and with hair that looks like it was combed with a fork, but knowing several criminal defense lawyers, it's hard to believe any attorney in his position (and in Los Angeles, no less) would try to rock the "hungover businessman" look throughout a high-profile murder trial.

Stranger things have happened, but based on a by-the-numbers first season and Netflix's own financial woes, it's hard to imagine The Lincoln Lawyer getting another shot. Had it aired on network TV as initially planned, it might be a different story, but the wealth of viewing alternatives on its own streaming service — to say nothing of all the others — doesn't bode well for its future.

The Lincoln Lawyer debuts on Netflix May 13.
click to enlarge Mickey and his other ex-wife Lorna (Becki Newton).
Netflix
KEEP THE HOUSTON PRESS FREE... Since we started the Houston Press, it has been defined as the free, independent voice of Houston, and we'd like to keep it that way. With local media under siege, it's more important than ever for us to rally support behind funding our local journalism. You can help by participating in our "I Support" program, allowing us to keep offering readers access to our incisive coverage of local news, food and culture with no paywalls.
Make a one-time donation today for as little as $1.