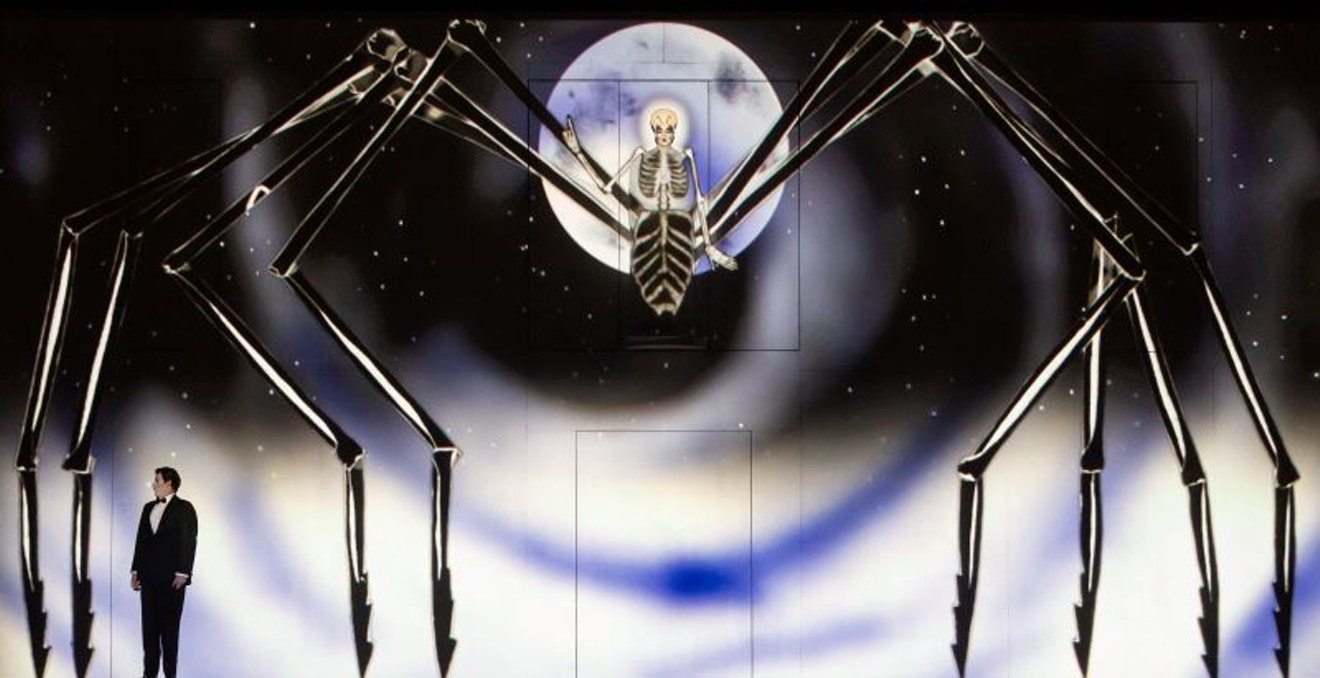 A theatrical, state-of-the-art, mesmerizing production of The Magic Flute. Photo by Lynn Lane
Houston Grand Opera's presentation of Mozart's final masterpiece, The Magic Flute, a co-production between Komische Oper Berlin and London avant-garde theater company 1927, is one for the ages. You haven't seen anything quite like it. It is spellbinding, amazingly theatrical, state-of-the-art, and thoroughly mesmerizing. A feat of theater prestidigitation of the highest caliber, it raises the bar for all operas yet to come.

Whether this is good for the future of the art, I don't quite know, for Herr Mozart takes second place to all the visual shenanigans that surround his sublime music. Mozart being Mozart, it's difficult to upstage him, but the real star of this show is animation designer Paul Barritt, 1927's co-founder and co-artistic director. There's so much going on – projections, animations, and special effects (the old-school wizards at Disney would heartily applaud and be green with envy) – all brilliantly realized and conceived – that there's no other place for Mozart than the backseat. This is a production where you stare agape at the images, awestruck in amusement, yet you hear this wondrous soundtrack lurking in the background, somewhat undervalued and slightly unused.

The concept is solid. Present Flute as a silent movie. Use all its tropes – inter titles (which replace the opera's dialogue passages), cinema techniques like fades, iris ins and outs, even its annoying scratches and artifacts; pay homage to Buster Keaton, Nosferatu's Max Schreck, cinema bad-girl Louise Brooks; and then project this on a giant screen in front of which the singers interact. The effects can be breathtaking. The Queen of the Night (coloratura soprano Rainelle Krause), the opera's most iconic role, becomes a giant spider, her spiky legs encasing the helpless hero Tamino (tenor Norman Reinhardt).

But all this theatrical sorcery tires. No matter the depth of animation or the sense of movement – when Tamino descends into the temple of Sarastro (bass Anthony Robin Schneider), we feel a bit queasy, like we did decades ago during Cinerama's roller coaster, even though no one is actually moving – the whole opera lacks depth, it's one-dimensional. The singers barely move, they're stuck in the screen in their revolving doors so the projections will sync with their positions.

During a crossover, lecherous Monostatos (tenor Aaron Pegram) drives an animated pack of dogs, with the leash perfectly matching his hand. It's one thing for the background to dance and animate, but we miss the actors' own movement. They are pinned in place, flat against the screen, unlike the numerous butterflies, sprites, and Popageno's friendly cat who cavort freely and have a life of their own. Other than the animations, no one's very animated. (And shouldn't Papageno, the bird catcher, have a pet bird instead of a cat as companion?)

The singers, most of them alumni of the prestigious HGO Studio, are capable, but seem to be outclassed by the special effects. As a dancer once said when she had to perform at a NYC supper club during her early days, I had to compete with the beef steak. Well, the singers have to compete with the stunning visual wonders. They're overwhelmed. Even Krause, who's made an international impact with her Queen of the Night, seems somewhat diminished. She sings her classic aria, “Der Hölle Rache" (The Vengeance of Hell), one of opera's most treacherous pieces, with precision but not much evil force. The stratospheric high Fs were there but didn't have much dramatic punch, although the opening night audience approved vociferously. It's hard to be evil when you're a disembodied head atop a cartoon arachnid.

Only soprano Andrea Carroll, as Queen of the Night's daughter Pamina, in love at first sight with Tamino, rises above and beyond the visuals. She makes quite the impression with her vocal silkiness and power. Her suicide aria, overseen by skeletal vultures at a rocky precipice straight out of German romantic painter Caspar David Friedrich, is fraught with emotion and conviction that transcends the animation. Throughout, this singer transcends.

Maestro Dame Jane Glover, newly elevated to the Order of the British Empire at last month's New Year's Honors, leads a spirited orchestra. You can tell she reveres and revels in her Mozart. Co-directed by Suzanne Andrade from 1927 and Barrie Kosky from the Komische Oper Berlin, revived here by director Erik Friedman, Flute is a stunning, revealing eye full. (You may remember Kosky's impressive work on HGO's Saul from 2019, one of the company's crown jewels.) This may be the production HGO has been waiting for. It's user friendly, computer generated, and unabashedly fresh and innovative. Quite astonishing in its flair and verve, Flute sings with post-modern dash and cheeky charm. You won't forget it.

Always the innovator, Wolfgang Amadeus Mozart, music's eternal genius, would have loved this show, even though he only gets second billing.

Note: Can somebody explain why Sarastro and his chorus of priests wear COVID masks? No one else in the opera sports them. Is it symbolic or a director's touch? A subtle Masonic influence? Are all these singers unvaccinated? What's going on? On the other hand, would somebody tell me why the patrons in the Founders boxes are allowed to drink their prosecco and chardonnay during the performance and go unmasked, while the great unwashed below suffocate under their N95s and go unquenched? Hmm?

The Magic Flute continues through February 13 at 7:30 p.m. Tuesday, Thursday, Friday and Saturday; and 2 p.m. Sundays at Wortham Theater Center, 501 Texas. Face masks required. For more information, call 713-228-6737 or visit houstongrandopera.org. $20-$210.
KEEP THE HOUSTON PRESS FREE... Since we started the Houston Press, it has been defined as the free, independent voice of Houston, and we'd like to keep it that way. With local media under siege, it's more important than ever for us to rally support behind funding our local journalism. You can help by participating in our "I Support" program, allowing us to keep offering readers access to our incisive coverage of local news, food and culture with no paywalls.
Make a one-time donation today for as little as $1.