Chaos And Comedy Come Together In The Superbly Quirky Well 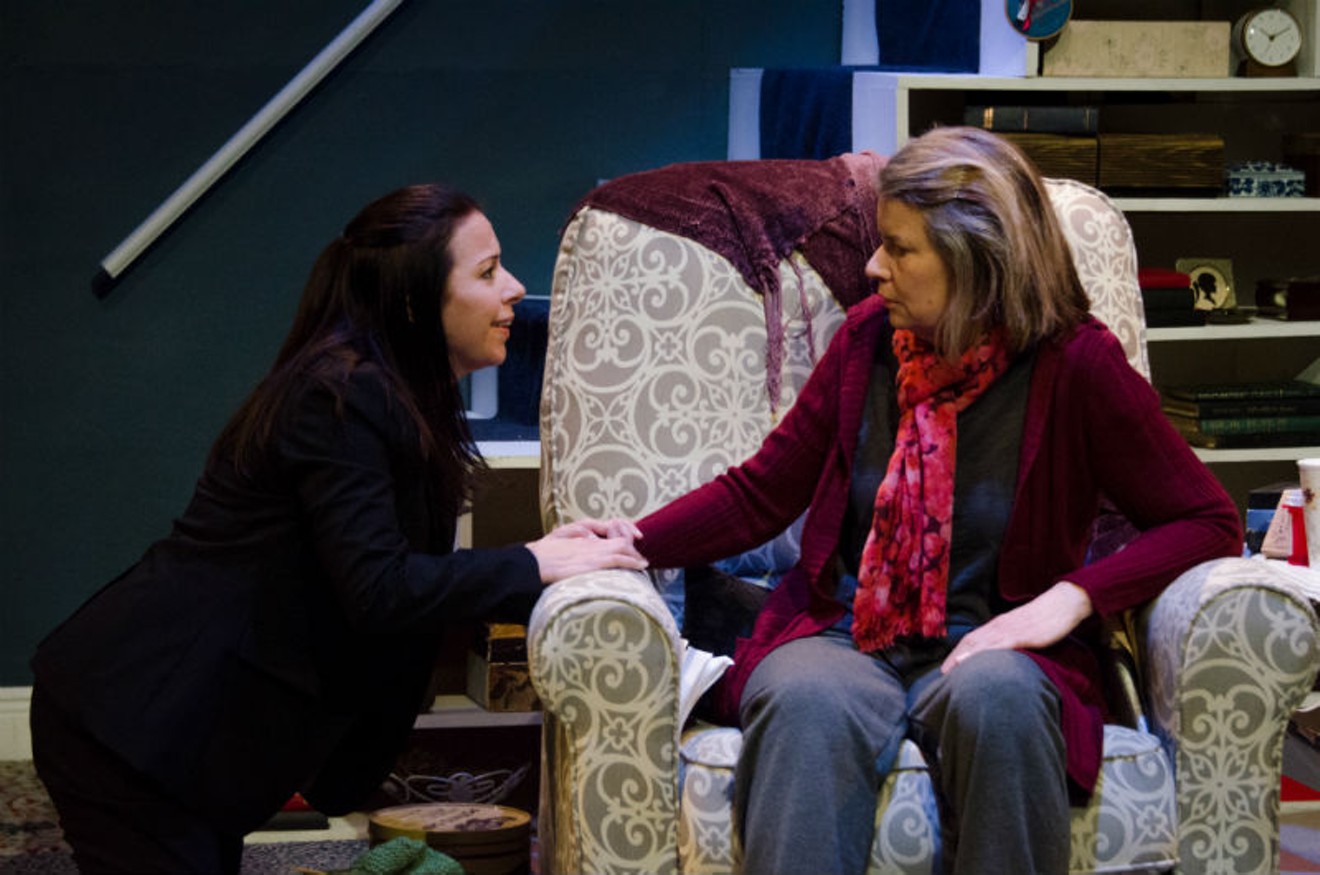 It’s close to impossible for a theater company to hit it outta the park every production. This is true regardless of the theater’s size, budget, mandate or creative team. It is certainly true of Mildred’s Umbrella, a small company that doesn’t always elicit critical praise in these pages.

But, what Mildred’s does have that precious few other companies lay claim to, is the ability to often enough pick wildly provocative, outlandishly smart and creative work that’s new to Houston stages, direct and cast the hell outta the thing and deliver some of the best and most memorable shows we could hope for.

Quite happily Mildred’s latest production, Well, by Lisa Kron, is one of those times. This isn’t just a hit outta the park; it’s a grand slam home run.

Not that you’d know that by the way the play’s narrator, Lisa (Sammi Sicinski) describes the show. Or more specifically the many ways she attempts to define the show for us. “This is not a play about me and my mother”, she tell us right from the start. This despite the front and center presence of her ailing and complaining but sweet mother Ann (Sally Burtenshaw), seated center stage in her La-Z-Boy, constantly interjecting her thoughts and ideas about Lisa’s play the entire show.

“This is a solo show with other people in it,” Lisa also points out. That explains the other actors (Shelby Blocker, Callina Anderson, Xzavien Hollins and Ryan Kelly) who all take turns playing various roles in Lisa’s very personal tale.

But what exactly is that personal tale about? “It’s a multi character theatrical experience about health problems in an induvial and the community….an exploration of universal issues,” says Lisa.

Huh, we say? Huh, her mother Ann says? Even her cast wonders aloud on and offstage what the hell they’re supposed to be doing and saying.

If it sounds like a mess, it is. Well, is the ultimate play that goes wrong on every level. The playwright/narrator has no idea what’s she’s trying to say, characters don’t behave the way they’re supposed to, the 4th wall is broken in a myriad of ways, including in order to give the audience snacks, genres and themes are mashed together like a Thanksgiving leftover smoothie, metatheatric mutiny upends the narrative and ultimately the whole thing derails. Except it doesn’t.

The brilliance of Well, here directed with precise acuity and a brilliant sense of space by Bree Bridger, is that the chaos is the clarity. Everything goes wrong because our narrator Lisa, is desperately trying not to think and say what she really feels. And yes, of course it’s about her mother.

What was it was like to grow up in house with a Midwestern white Jewish woman that had the chutzpah to fight for neighborhood racial integration in the 1960s but was so debilitated by mysterious and possibly imagined allergies, that most of the time she was immobile and in pain? How did Lisa’s own battle with disease mimic or differ from her mother’s? What to do with the frustration and anger toward your mother and even worse, the fear that you may end up just like her? Can you admire, even love your mom and hate her at the same time? Can you even talk to her about any of this or do you instead need to write a show to try and let her know how you feel?

“This play is intense”, says one of the cast members to Lisa in between scene changes. She’s not lying, Kron is grappling with big festering emotions and uncomfortable social/racial issues here, but that doesn’t mean that things aren’t strangely and terrifically funny along the way. Whether it’s Ann interrupting the action on stage to give her two cents or wooing the cast over to her side with offers of soda, Lisa’s exasperated spotlit asides explaining to us what’s meant to be going on or the grade school bully that keeps barging into the play to torment Lisa despite her character not being part of the script, Kron makes sure laughter heartily populates the 90-minute show.

In fact, the serious but sweet but sad but funny first person narrative Kron plies in Well (2004) can in some ways be seen as a pre cursor to her later and more famous work, the 2013 Tony Award Winning, Fun Home (adapted by Lisa Kron and Jeanine Tesori from Alison Bechdel's 2006 graphic memoir of the same name).

But while we all know Kron was working with someone else’s memories for Fun Home, this one is all her. Or enough her that we can comfortably call the play autobiographical. Actually, even if none of the characters were present in Kron’s real life, we wouldn’t believe it thanks to this uniformly superb cast who bring these personalities so richly to life, that we can't help but believe them to be real.

Special mention must go to Sicinski as Lisa and Burtenshaw as Ann, both of whom own the stage even when they are talking over and undermining each other’s efforts. Sicinski’s handle on frustration is both explosive and comedic and her ability to deliver fluster is a study in actorly control. Burtenshaw dances beautifully between charming and complaining, hosting and catered to, warmly supportive and correcting. Lisa tells us that everyone couldn’t help but love her mother, and Burtenshaw shows us why.

Another nod must also go to Sound Designer John Peeples for his clever chimes and whispers that punctuate the eccentric action on stage. Of particular delight were the maraca shaking sounds that heralded scene changes, keeping things just unexpected enough to match the oddness.

Oddness is a good note to end on in any discussion of Well. Kron ends her play as she begins it – a bit unclear yet meaningful nonetheless. There will be no emotive kiss and cry on her watch. No big lesson learned. Just feelings expressed that are ultimately as messy and as beautiful as the play itself.