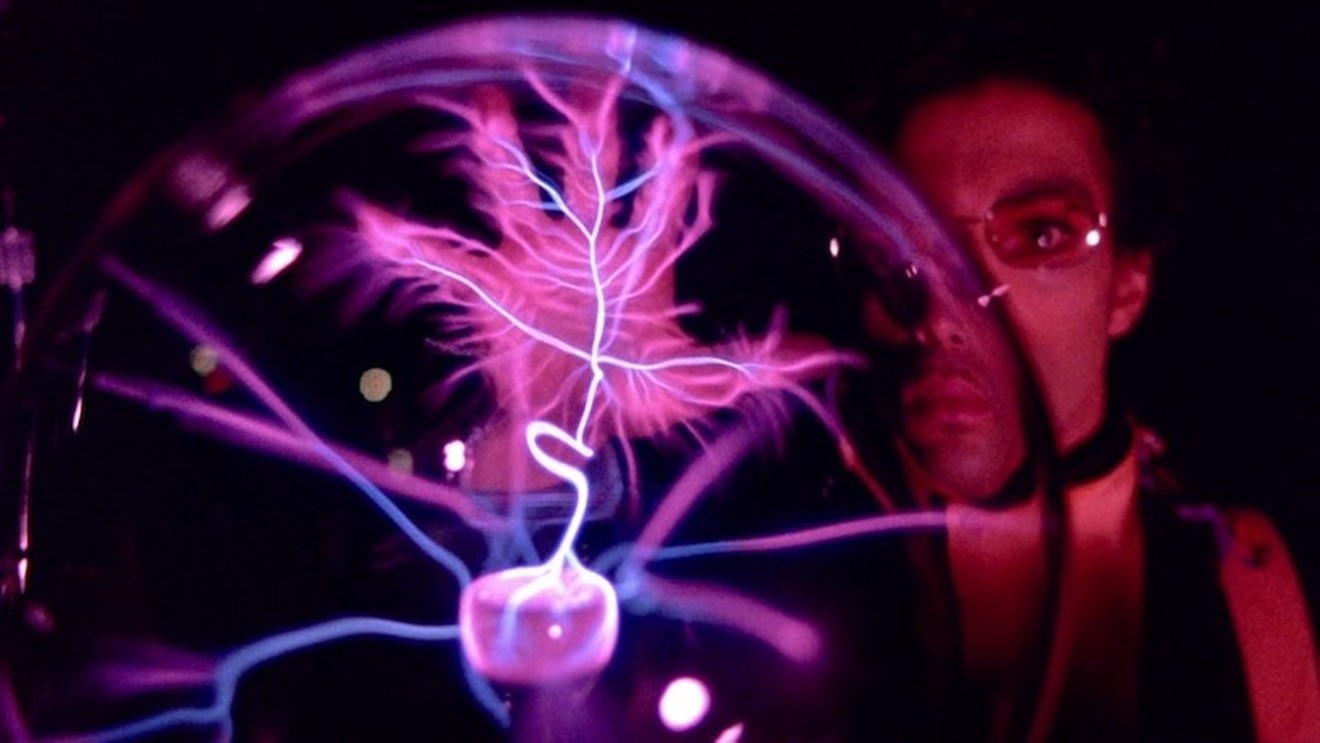 Prince commands everything in Sign O' the Times, his best film apart from Purple Rain. Screenshot/Rotten Tomatoes
Thirty years after its original U.S. theatrical run and 26 after it was last shown on cable, Prince’s 1987 concert film Sign o' The Times returned to Showtime's schedule last month. If you don’t recall, Sign o' The Times is the film that occurred after Under The Cherry Moon, Prince’s idea of a romantic comedy. Less a full-blown cinematic film as that and Purple Rain, Sign o' The Times instead focuses strictly on the music. Much like many Prince things from the ‘80s you wanted to hide from your parents, it became a cult classic on VHS.

The most important distinction? It is the greatest Prince movie, ever. Yes, Purple Rain is sentimental but if you love Prince for all things eclectic and to watch the peak of his powers, it would be the 1987 film that still isn't on DVD. And maybe won't be On Demand for much longer.

Sign o’ The Times, shot in June 1987, plays out exactly as a concert film would, even with Prince’s sly sense of humor. Prince and company make themselves the central focus, not the crowd that may be taking all of this in for the first time. His hair is frocked and most of the time he doesn’t spend onstage performing songs like “House Quake” and “Sign o' The Times,” he’s staring at the actions of his band through wire-rimmed glasses. Prince had many a debonair look in his time but his take on being a pensive Dick Tracy is maybe Top 10 all-time, if not Top 5.

Throughout its 85-minute runtime, Sign o' The Times sticks to being a full-on showcase for Prince’s musicianship. Shelia E commands the drums where Prince sarcastically announces into the mike, “Pretty good, for a girl.” The Lovesexy Band plays on, Dr. Fink being the lone holdover from The Revolution, and songs like “I Could Never Take the Place of Your Man” get elongated guitar solos. During “Hot Thing,” he can wiggle and gyrate with a wind machine and smoke behind him.

Whereas his Purple Rain character, The Kid, played up tension onstage in nearly every song, here Prince reins himself in and makes silliness, sensuality, and perfectionism his own bag. During the dance routine for “Hot Thing,” he casually slides underneath his female dancer to rip off her skirt before she begins chasing him around the stage. It’s Looney Tunes when you think of it, her as a bikini-clad Wile E. Coyote and him a fast-paced RoadRunner who can’t help but do the splits.

Not lost on anyone in the audience is that, as concerts go, this is Prince's tour de force. Given that the Sign o' The Times tour never made it to America, it is made to feel like how we all envision Amsterdam in our minds. There’s still gaudiness from the neon driven set design and costume. The outrageousness that would have shocked someone in the ‘80s is now more of an understood zeal.

Prince's associates Sheila E., Boni Boyer and the mysterious Cat all take center stage during the film.
Cineplex Odeon Films
In truth, Sign O' the Times in 2017 works not just as a showcase for how bloody great Prince was but is a coming-out party for Shelia E’s drum codas and Cat (and pretty much everything Shelia E and Cat). The only piece of film that feels grainy is the performance of “U Got The Look” with Sheena Easton, which may be some of the only footage taken from the concerts in the Netherlands and Belgium. Everything else looks and sounds remastered and pops, mainly due to the fact that the majority of the film was shot at Prince's Paisley Park Studios. Every peace symbol, every falsetto, and every spin move makes the audience lose it considerably. When he and Cat begin their dance for “If I Was Your Girlfriend,” the crowd is rooting for her to finally bed Prince.

Much as at many moments of his career, Prince lets the women of his band take center stage. Boni Boyer absolutely dominates “Forever In My Life” as Prince takes the stage in a bellhop outfit I secretly wish I could borrow for Halloween. Without her, Shelia and Cat, the film wouldn't feel as joyous or capture exactly what made Prince, well, Prince. You have the multi-instrumentation, the careful and meticulous nature of directing the band in various costumes and characters. But those three women own the stage every time the camera pans toward them. As a production, Sign O' the Times feels big, and its face, a man who could dance better in platform heels than I ever could, is at the absolute top of his game. The film married all of Prince's particulars — jazz, funk, R&B, even a little gospel. Spirited pulls in each of these directions can be found in the zany performances of "If I Was Your Girlfriend" and the Charlie Parker cover of "Now's the Time."

Jazzy, vibrant and driven, Sign o’ The Times pulls off the rarest of feats. It is a concert film that gives power to the songs that were already created, creating a world that you wish existed and could last forever.

Sign O' the Times airs several times across the Showtime family of networks between 10:30 a.m. today and October 14. See sho.com for details.