Road Trip: Traveling Through Texas in the Footsteps of Presidents

It takes an ego as big as Texas to sit in the White House. A centerpiece in the Great Hall of the LBJ Library is the photo-engraving mural by artist Naomi Savage. Each etched magnesium plate measures eight feet by ten feet. Photo by Jay Godwin/Flickr (public domain)
This summer we're taking a look at interesting, odd, historic and just plain worth it road trips in and around the Lone Star State.

We've got a few outside chances at putting another Texan in the White House come 2020: there's Julián Castro, Mark Cuban, Jeb Bush (born in Midland) and the perennial "one foot in, one foot out" Rick Perry, plus a few others perfecting their look, polishing their taglines and (if they're smart) covering tracks.

But until and if that happens, there's no shortage of commander-in-chief cred right here in the Lone Star State. We have a trifecta of presidential libraries (LBJ, Bush 41, Bush 43); a Fort Worth mausoleum that pays homage to Washington, Adams, Jefferson and Madison; Ike's gigantic head; and the very sad but equally fascinating documentation of JFK's final days.

Not a president but universally loved, the recent death of former First Lady Barbara Bush just about seals the deal for this "In the Footsteps of Presidents" Texas road trip. The literacy advocate is buried at George H.W. Bush Presidential Library in College Station. 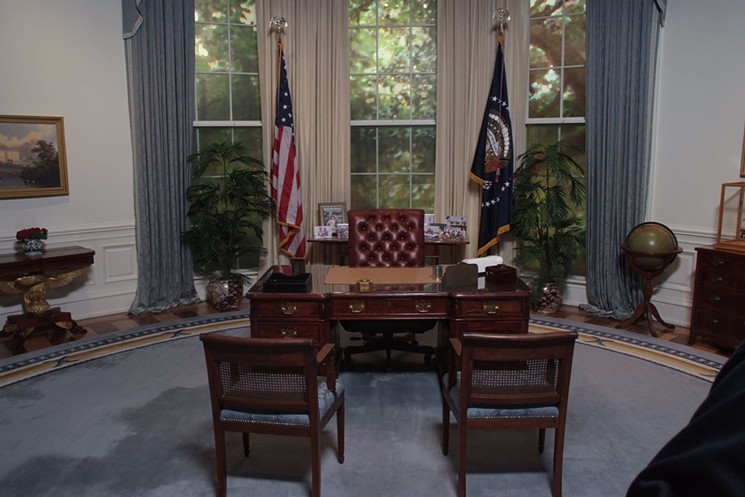 President George W. Bush watches news footage from Emma E. Booker Elementary School in Sarasota, Florida, of Flight 175 hitting the south tower of the World Trade Center on September 11, 2001.
Photo courtesy of the George W. Bush Presidential Library and Museum
The George W. Bush Presidential Library and Museum is located on the campus of Southern Methodist University. The "A Nation Under Attack" exhibit remembers the horrific events of September 11, 2001 and also honors those who lost their lives through artifacts, images and even a piece of steel from the World Trade Center that visitors can touch.

Other exhibits include a look at life in the White House (pets, state dinners, the Bush Ranch), a replica of the Oval Office (natch), and a 360-degree LED screen that shows clips of art, history and entertainment. Don't overlook "Critical Decisions," where visitors can sit in the hot seat and decide how they would react when faced with major crises; then meander through the pet-friendly network of trails at the 15-acre Native Texas Park.
George W. Bush Presidential Library and Museum, 2943 SMU Boulevard, Dallas, 214-346-1650, georgewbushlibrary.smu.edu.

This replica of the Oval Office is at seven-eighths scale and reflects the technology available during this pre-Twitter era: teletype machines, a massive phone system and a trio of televisions.
Photo by Jay Godwin/Flickr (public domain)
click to enlarge

The LBJ Museum and Library has been updated, as seen in these tenth floor exhibits.
Photo by Lauren Gerson/Flickr (public domain)
Insiders at the LBJ Presidential Library tell us that far and away the most popular exhibit is the replica of the Oval Office. Permanent exhibits include Lyndon Baines Johnson's presidential limousine, the Vietnam War, the Civil Rights Act of 1968, and the assassination of John F. Kennedy, Jr. which paved the way for LBJ's ascension into the top spot. The funniest exhibit is a life-sized animatronic of LBJ that recites some of the witty Texan's stories and anecdotes.
LBJ Presidential Library, 2313 Red River, Austin, 512-721-0200, lbjlibrary.org.

This monument to the five-star general was dedicated in 2011, "in appreciation for and in honor of all veterans who have served to protect our freedom."
Photo by Emilie Everett via CC
When it comes to megalithic monuments of presidents past, there's no shortage here in Texas. Denison, the birthplace of President Dwight D. Eisenhower, has a bust of Ike sculpted by legendary local artist David Adickes. The Eisenhower Birthplace State Historic Site showcases the home where the 34th president was born.
Eisenhower Veterans Monument, Loy Lake Park, South Polaris and 100 RC Vaughn, Denison
Eisenhower Birthplace State Historic Site, 609 South Lamar, Denison, 903-465-8908, thc.texas.gov/historic-sites/eisenhower-birthplace-state-historic-site.

And speaking of David Adickes, it doesn't take much of a road trip to view 43 of his gigantic presidents heads outside his studio on Nance. Adickes has been given his marching orders — this time by TxDOT when they begin the massive expansion project on I-45 — but until that happens we can view this spectacle right here in our own back yard.
David Adickes Studio, 2401 Nance, Houston.

We can view statues of our nation's first four presidents inside a mausoleum at Fort Worth's Greenwood Memorial Park. George Washington, John Adams, Thomas Jefferson and James Madison overlook a marble mosaic of the Great Seal of the United States on the floor, while a stained glass scene of a patriot is framed above an excerpt from the Declaration of Independence.
Greenwood Funeral Home, 3100 White Settlement Road, Fort Worth, 817-336-0584, greenwoodfuneralhomes.com.

Photo by White House Press Office, courtesy of John F. Kennedy Presidential Library and Museum (public domain)
President John F. Kennedy wasn't born in Texas but certainly met his demise here in the most gruesome of ways. His assassination on November 22, 1963 gave rise to conspiracy theories (was it orchestrated by the mob, LBJ or the CIA?) and an expanded glossary of catch phrases: Zapruder analysis, grassy knoll, lone gunman. We could devote pages and pages to landmarks associated with his death but RoadsideAmerica.com has done us a solid by cataloguing even the most esoteric of connections.

In Dallas there's the grave of Abraham Zapruder (who filmed the assassination), a Philip Johnson-designed 30-foot-tall Kennedy assassination cenotaph, Lee Harvey Oswald's boarding room and matinee seat, the Sixth Floor Museum (from where the shots were fired), a historical marker referring to the basement where Jack Ruby shot Oswald, and the grave of veteran Dallas police officer J.D. Tippit (who was shot by Oswald less than an hour after the assassination).

In Fort Worth there's a bronze statue of JFK where he gave his last speech, a marker outside the entrance of the former Hotel Texas where JFK spent his last night, and Oswald's grave in the only cemetery that would accept his body: now called Rose Hill Park. The town of Handley has a saloon with a morbid shrine devoted to the assassination; the Ruth Paine House Museum in Irving offers tours of the private home where Oswald spent the night and stashed his gun; and Oak Cliff marks the spot where Oswald shot officer Tippit four times, fatally killing the eagle-eyed policeman who attempted to apprehend the perpetrator.
To view Texas Attractions and Oddities visit roadsideamerica.com/location/tx/all. They also are selling a Roadside Presidents app for $2.99 that covers notable landmarks all over the United states; visit roadsideamerica.com/mobile/presidents/ios.
KEEP THE HOUSTON PRESS FREE... Since we started the Houston Press, it has been defined as the free, independent voice of Houston, and we'd like to keep it that way. With local media under siege, it's more important than ever for us to rally support behind funding our local journalism. You can help by participating in our "I Support" program, allowing us to keep offering readers access to our incisive coverage of local news, food and culture with no paywalls.
Make a one-time donation today for as little as $1.