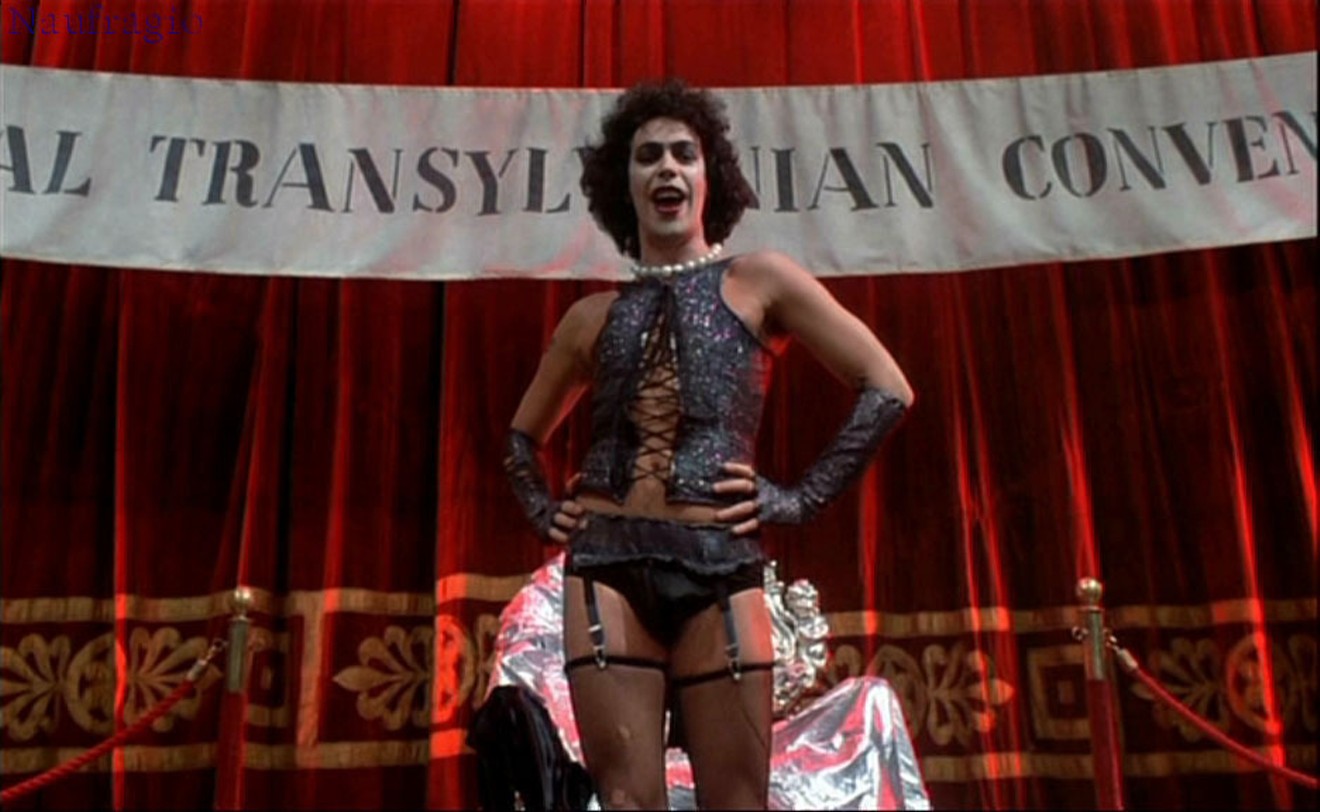 Not pictured: how we should be thinking of trans people in cinema in 2018 Screencap from The Rocky Horror Picture Show
One of the current uproars in pop culture news is that Scarlett Johansson will be playing a trans man in an upcoming biopic. Johansson will be portraying Dante “Tex” Gill, a gangster who owned massage parlors, did the standard tax evasion gimmick of all discerning criminals and once threw a birthday cake at a Pennsylvania State Trooper. Don’t get me wrong; it sounds like a fun a flick. As someone who has Harlem Nights in his top ten films I am always down for an out-of-the-box gangster movie.

The backlash comes from the trend in Hollywood to cast cis actors to play trans parts despite the increasing availability of trans actors in the mainstream. Johansson herself hasn’t helped her case much by saying exactly the wrong things in response. Her spokesperson told Bustle, “Tell them that they can be directed to Jeffrey Tambor, Jared Leto, and Felicity Huffman’s reps for comment.” Because, you know, a problem doesn’t exist if other people do it. Remind me to try that logic on the cops next time I get pulled over for speeding.

This has spawned some rather hilarious memes, including a fake poster with Johansson starring as Harriet Tubman, Johansson with the Infinity Gauntlet collecting minority parts so she can wipe out half the roles in Hollywood, and a joke by my friend, author Shiv Ramdas, about how we can expect Johansson to play the lead in whatever movie they make about the Thai Cave Rescue.

I have my own theory on how Johansson got this part. For some reason Hollywood has decided that Johansson is one of the only bankable female stars in the hundred-million dollar budget range, which is why Lucy exists as a hit and Johansson ended up in Ghost in the Shell. Being in this biopic is going to take ScarJo away from her availability to justify a lot of action producers’ ridiculous budget, so there must be a reason she’s taking time off to do something like this. My guess is Oscar Bait. We’re seeing the investment in Johansson as a serious actress to lend clout to whatever the next pretentious action flick with delusions of Avatar is she’ll collect millions of dollars to wear black leather in.

Johansson has her supporter-memes though, and one of them caught my eye. It goes, “If you think Scarlet Johansson shouldn’t play a trans person, I have two words for you. Tim Curry.” As the resident Rocky Horror Picture Show expert for the Houston Press and oft-quote meme-stomping buzzkill, I’d like to address this piece of nonsense.

First things first: if you’re getting your understanding of gender and representation of gender minorities in Hollywood from a movie released in 1975 then you have some reading to do. Anyone at this stage of comprehension should just consider themselves in time out.

Beyond that, Curry’s character, Dr. Frank-n-Furter isn’t trans. He’s a cross-dresser, which is why his entrance song is called “Sweet Transvestite.” Creator of the show, Richard O’Brien, has a long history of interest in cross-dressing as a sexual fetish. The song “Little Black Dress” sung by Janet Majors in the semi-sequel, Shock Treatment, was originally another cross-dressing dressing anthem written for the never-produced Rocky Horror Shows His Heels. O’Brien himself would continue to cross-dress in roles into the 21st century in films like Night Train.

Unfortunately, O’Brien has gone from LGBT icon to something of an embarrassment in the last few years. In 2016 he was asked by Metro about trans-exclusively feminists (TERFs) who argue that surgery and gender-identification doesn’t make a person a woman. O’Brien answered…

“I think I agree with that… You can’t be a woman. You can be an idea of a woman. You’re in the middle and there’s nothing wrong with that. I certainly wouldn’t have the wedding tackle taken off. That is a huge jump and I have all the sympathy in the world for anyone who does it but you aren’t a woman.”


O’Brien himself is openly gender-fluid, and earlier in the interview referred to himself as a third sex. Still, his words stung to the many trans people who have found sanctuary in midnight showings of his most famous work over the years. It’s especially relevant this year, when a group of TERFs disrupted the London Pride Parade to protest trans-inclusion.

Frank-n-Furter, like his creator, is a gender fluid character. The role is played by both men and women, cis and trans. I only use “he/him” to match the script. In no way is Frank meant to represent the struggle for acceptance that trans men and women seeking recognition for their gender identification. He’s an alien mad scientist lothario that eats people who piss him off. He's also completely fictional, unlike Tex Gill.

Johansson’s casting is another indicator that it is long past time we looked at non-cis roles in new terms. They aren’t science fiction parody monsters like Frank-n-Furter nor should they be hollow cosplay for award-chasing thespians. There’s no reason to cast Johansson in such a role aside from a shameless studio grab for “serious issue” cred and a chance for whoever has a trans man fetish to picture one of the most beautiful women in the world in their fantasy.

I love Rocky Horror, but it’s not a template for how we should treat non-cis roles moving into the future. Using Tim Curry as a shield to hold onto times past just segregates trans people from parts they deserve. It’s not like Johansson has ever had to fight any trans actors or actress to appear in Marvel movies. They shouldn’t have to fight her for the films that represent their own history.
KEEP THE HOUSTON PRESS FREE... Since we started the Houston Press, it has been defined as the free, independent voice of Houston, and we'd like to keep it that way. With local media under siege, it's more important than ever for us to rally support behind funding our local journalism. You can help by participating in our "I Support" program, allowing us to keep offering readers access to our incisive coverage of local news, food and culture with no paywalls.
Make a one-time donation today for as little as $1.