Sabrina is Great, But… 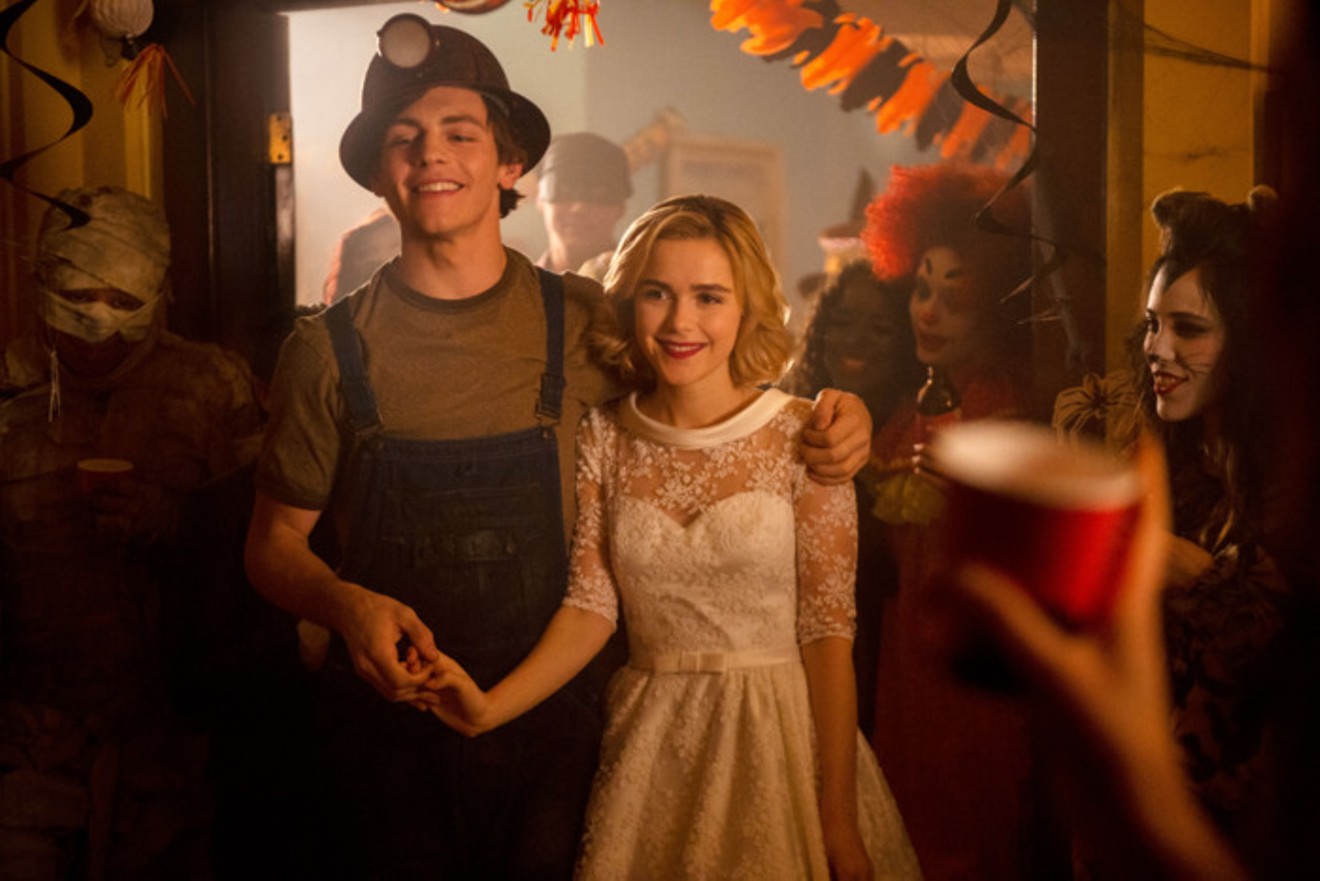 Sabrina in her mother's wedding dress Screencap from "Dark Baptism"
I’ve been watching The Chilling Adventures of Sabrina on Netflix every chance I get. Since we didn’t get Stranger Things Season 3 this Halloween it serves as a nice spooky substitute. I loved the Roberto Aguirre-Sacasa re-imagining of the teenage witch that is the primary source of the new show, so I always had high hopes.

And, there’s a lot to like about Sabrina. The visual aesthetic is amazing. The first episode is called “October Country,” and that’s apropos since the whole thing looks like Ray Bradbury’s brain exploded all over the place. Between post-Twilight cinematography shots of haunted woods, inexplicably gothic school libraries and horrific visions of mass witch hangings the show has a look that puts most others to shame.

The special effects are also tops. We see Salem’s goblin form for just seconds, but they are terrifying seconds that live up to the title of chilling. Magic itself is somewhat lacking, but when it shows up in, say, the mine scene, it really gets the job done.

The cast knocks it out of the park. Even as someone who grew up with Clarissa explaining it all, I can admit that Sabrina was never a part that was going to require a grand thespian, which is why Melissa Joan Hart was able to carry it. Kiernan Shipka is marvelous though. She brings the sort of earnest strength that makes for a good center of an ensemble. Her crusading spirit and penchant for honest vulnerability make her a joy to watch. She’s eclipsed by Michelle Gomez as Wardwell, though. Who would have thought one of Doctor Who’s Masters would find an even more perfect villain to play. I’m surprised they have sets to act on since Gomez chews every scene she’s in to absolute bits.

Finally, I don’t know what all the people who say this show is slow at first are talking about. It moves at breakneck speed, in my opinion. It’s far faster than its sister show of Riverdale and even Netflix hits like Daredevil. There is drama and scares almost from moment one, and I think the pacing is exemplary.

There are two things to really dislike about Sabrina. The first involves its approach to the supernatural. I get that the witches of Greendale are throwbacks to classic witch mythology, right down to signing the Devil’s book and stealing penises (that last one had me admittedly rolling on the floor laughing). It bears no resemblance to modern paganism or Satanism in any form, and I never really expected it to. As a loosely-affiliated Satanist, I just don’t have time to normally be angry at how Christians screw up the various left hand paths.

However, let’s read the room. We just had an anti-Semitic mass shooting at a synagogue that claimed 11 lives. The connections between anti-Semitism and a belief in sinister occult forces at work is centuries old, dating back at least to Martin Luther.

In Canada, they’re still actually charging people for witchcraft. You can type “Trump witchcraft” into Google and find plenty of stories of pastors and religious leaders assuring their flocks that witches are in fact at work trying to undermine their beloved right-wing power structure. A Gallup poll form 2010 shows 20 percent of Americans actually believe in Sabrina-esque witches.

In this environment, I’m not sure a show about hidden witches with edgelord humor about cannibalism and assassination is really a responsible thing. If this past week has proven anything it’s that cultivation theory is alive and well among the right, and that they will take lethal means in their hands to combat their vaporous boogeypersons. I long for the more responsible witches of the Buffy era, no matter how much I enjoy watching classic witch tropes back on mainstream television.

The second is the absolutely pointlessly eroticized and frankly gross nudity of Shipka. The scenes where her boyfriend searches for a witch mark on her in the woods and the bathtub vision are so jarringly out of place that they destroy the narrative. Sabrina is just shy of 16, and the camera crawls over her like a creepy uncle’s hand on your leg.

I give Riverdale somewhat of a pass on this. That show is basically teen Dynasty, though it did jump the shark having Betty strip in front of her mother to “Mad World.” Sabrina, though, isn’t a show about psychosexual themes. Her relationship with her boyfriend is wholesome almost to the point of nausea. She herself is pure spirit. Having the camera constantly framing her with this male gaze attempt at titillation is inappropriate for the age of the character and a disservice to the narrative. I’m halfway surprised they didn’t actually strip her in front of the court in episode three.

You can talk about sex in teen stories. The Hate U Give does it well, even somewhat explicitly in the book if not the movie. Friends and I were discussing the sex scene with Jena Malone in Saved! as the perfect contrast. Teens deserve to have stories that discuss their physical lives. However, Sabrina loses some of its uber-feminism points by using Shipka’s body as a purely sexualized object for no reason.

I love the show. It’s spooky and weird and it reminds me of Riverdale before it went off the rails. I recommend watching it, but there are some definite flaws.
KEEP THE HOUSTON PRESS FREE... Since we started the Houston Press, it has been defined as the free, independent voice of Houston, and we'd like to keep it that way. With local media under siege, it's more important than ever for us to rally support behind funding our local journalism. You can help by participating in our "I Support" program, allowing us to keep offering readers access to our incisive coverage of local news, food and culture with no paywalls.
Make a one-time donation today for as little as $1.