#MeToo at the Opera, the Samuel Schultz Story 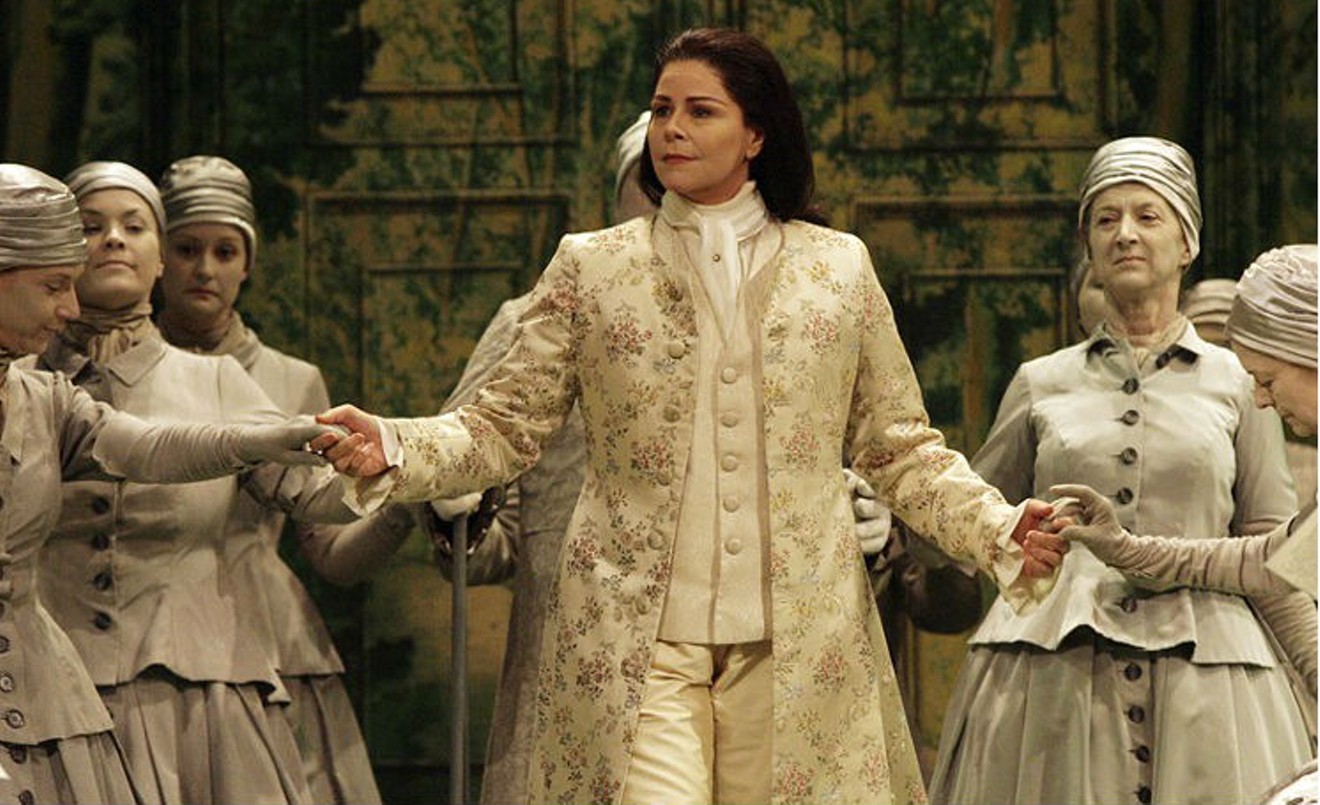 The 2010 Houston Grand Opera production of Xerxes. Shown here, Susan Graham in the title role. Photo by Felix Sanchez/ courtesy of Houston Grand Opera
Former Rice University Shepherd School of Music graduate, baritone Samuel Schultz, dropped a sandbag upon international countertenor David Daniels, one of opera's most honored and distinguished tenors and a professor of music at the University of Michigan.

He has accused Daniels and then boyfriend (now spouse) Scott Walker, of drugging, then raping him at the Midtown Arbor Place Apartments after the 2010 run of Xerxes at the Houston Grand Opera, in which Daniels co-starred as Arsemene, Xerses's brother and rival in Handel's opera seria. The allegations, first reported in the New York Daily News, have now gone viral, appearing in The New York Times, the Advocate, National Public Radio, Fox5NY, Billboard, the Detroit News, the Daily Beast, and as far afield as Germany's Die Welt. Daniels is such a superstar that any charges were bound to spread around the opera world.

Schultz first posted his allegations on his website which prompted the University of Michigan to look into the allegations, which were later picked up by the Daily News and The New York Times. Schultz's world fell apart, then Daniels'.

As of this week, Daniels has been put on temporary leave as Professor of Music at University of Michigan's School of Music, Theatre & Dance. And last Thursday, August 23, San Francisco Opera released a formal statement that said the organization is reviewing its casting of Daniels in its upcoming production of Handel's Orlando and is beginning an investigation. “San Francisco Opera is committed to its strong anti-sexual harassment policy and requires all company members to adhere to the highest standards of professional conduct. San Francisco Opera places a great priority in creating a safe and secure environment where everyone can focus on their work and art, and in which colleagues are treated with respect, dignity and collegiality.”

HGO managing director Perryn Leech responded to the Houston Chronicle's inquiries: “We are absolutely determined to deal with it, if it turns out to be true, and to cooperate fully in the investigation.”

In Schultz's telling, he met Daniels and Scott through a friend at Rice. As an opera student, he admired Daniels for his artistry, his forthrightness in being “out,” his stage presence, and his voice. He collected every Daniels recording and was thrilled to be asked by Daniels to attend the after-party of Xerses. During the party, Daniels invited Schultz to come back to his and Scott's apartment. Daniels asked him not to tell anyone at the party in case they'd get offended at not being invited.

Uncomprehending what exactly had taken place, he called a health center but was ashamed to admit why. His appointment was booked three weeks later, meaning all evidence of the abuse was long gone.

In corroborating his story, the Daily News contacted the two people Schultz had contacted immediately after the alleged rape, and they confirmed what he had told the newspaper.

David Daniels is an operatic superstar, although his voice today doesn't quite exhibit the ethereal vigor of his meteoric glory days. His most recent HGO appearance occurred last season in the company's Resilience Hall at George R. Brown Convention Center in Handel's Julius Caesar. No longer singing the lead role as he had in 2003, he sang a very fine supporting Ptolemy. The Houston Press review said, “He still has the magic, even if he's lost a bit of his former oomph. His stage presence is unassailable, though, for his Ptolemy is both bitch boy and sleazy Weinstein. He knows where the spotlight is.” Whatever happens in the days to come, his career will never be the same, stained by Schultz's allegations.

The #MeToo movement has crushed the music careers of legendary Metropolitan Opera maestro James Levine; Charles Dutoit, formerly of the Royal Philharmonic; and Daniele Gatti of Amsterdam's famed Royal Concertgebruw Orchestra. Not one case has gone to trial, and all allegations have been vigorously denied by the accused. All three remain ambiguously “he said, she said,” or, like this one between Schultz and Daniels/Scott, “he said, they said.”

Schultz admits that he has been irredeemably harmed by what occurred in 2010. “Rape is exactly what it was. Abuse is exactly what it was. Misuse of power.” It's a powerful statement, but so is Daniels' denial. What befalls the budding opera star and certifiable opera star will be determined in a court of law, not the court of public opinion, no matter the heinousness of the alleged charges. It may be too late to discover the truth, but it's never too late to ask questions.

“It affected so many parts of my initial steps in this industry,” Schultz writes on his website, “because I never wanted to see or interact with these people again. But I refuse to stop. If I stop singing, they hold all the power. They raped me; they will not take away my voice.”

Subsequently, Schultz says he threw away every one of Daniels' recordings.
KEEP THE HOUSTON PRESS FREE... Since we started the Houston Press, it has been defined as the free, independent voice of Houston, and we'd like to keep it that way. With local media under siege, it's more important than ever for us to rally support behind funding our local journalism. You can help by participating in our "I Support" program, allowing us to keep offering readers access to our incisive coverage of local news, food and culture with no paywalls.
Make a one-time donation today for as little as $1.