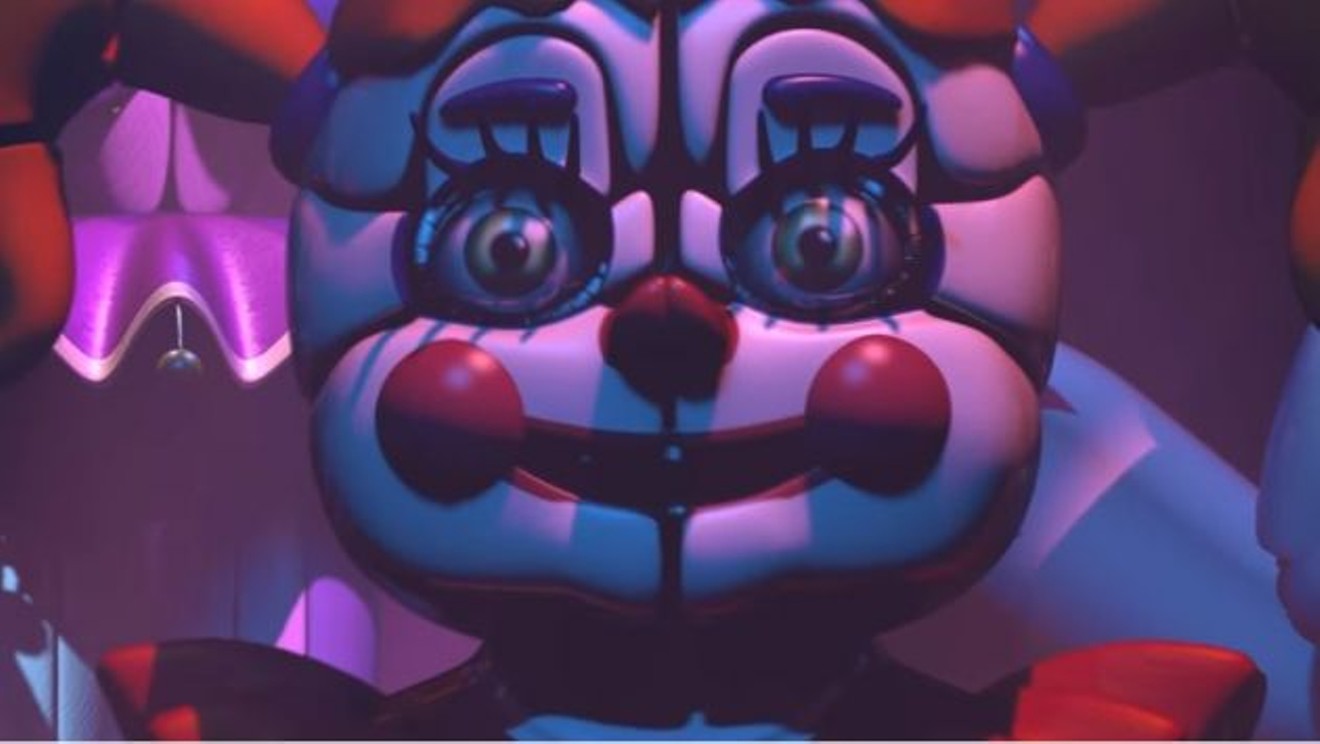 Cawthon's conservative donations have disappointed his LGBT fans. Screencap from the Five Nights at Freddy's: Sister Location teaser trailer
Scott Cawthon, the Houston-born/Austin-based creator of the hit horror game series Five Nights At Freddy’s, is a major donor to Republican politicians. Records from Open Secrets show that since 2015 he has made $42,204 in contributions, almost all of them to Republican candidates. The sole exception is former Hawaii Representative Tulsi Gabbard, a Democrat, who he gave $2,500 in 2019 during the Democratic Presidential Primary. His other beneficiaries include Devin Nunes, Kevin McCarthy, John Cornyn, Ben Carson, and Donald Trump.

The universal support for so many conservative politicians was a sore blow to the LGBT fans of the FNAF series. The games have a huge LGBT fanbase responsible for terabytes worth of fanart. As the series has progressed from its gritty beginnings, the evolution of the haunted animatronics from raggedy monsters to sleek, colorful, more-feminine looks has resonated with queer gamers. Blue Capsules, a collaborative FNAF fan comic, spoke out harshly against the revelation on Twitter.

“We are unanimously appalled by the discovery that Scott Cawthon has donated large sums to prominent republican figures,” the statement read. “As a diverse team composed largely of LGBT and neurodivergent artists it's difficult to properly express the magnitude of our disappointment.”

Cawthon has made a rare public statement in defense of his actions, which unfortunately has only worsened the appearance of him as a man working against the interests of marginalized groups. He released a long statement on the FNAF sub-Reddit. In it, he claims to love his LGBT fanbase and affirms his position as a pro-Life Christian, but he makes some rather disturbing justifications.

“For those who took the time to look, you saw that the candidates I supported included men, women, white people, black people, republicans, and democrats,” the statement read. “I supported Kimberly Klacik in Baltimore because I believed that she really cared for the African American community there and wanted to pull them out of poverty. I believed she could have really make a difference in a time when so many black communities were struggling. She lost, unfortunately. I supported Tulsi Gabbard, a democrat, even though I disagreed with her on several issues, because I felt she would have been a good and fair president. And yes, I supported President Trump, because I felt he was the best man to fuel a strong economy and stand up to America's enemies abroad, of which there are many. Even if there were candidates who had better things to say to the LGBT community directly, and bigger promises to make, I believed that their stances on other issues would have ended up doing much greater harm to those communities than good.”

Cawthon’s reasoning seems to be that his support for various anti-LGBT candidates is outweighed by the economic good that Republicans supposedly bring to the country. A particularly pervasive train of thought in conservative circles is that the left’s focus on direct aid to marginalized groups is what is keeping them impoverished, while the true solution is simply to shove more capitalism at inequality until it goes away.

In practice, this hasn’t worked and likely never will. Not only did the economy tank under Trump, but he also actively worked against LGBT rights. In addition to his famous ban on trans people serving in the military, with just a couple of weeks left in term he rolled back protections for LGBT people against discrimination under the Department of Health and Human Services. He also rescinded a school guidance policy that gave aid to trans students. While it’s possible that Trump made some LGBT people richer and safer, he inarguably made more vulnerable and less protected.

Nor does Cawthon’s support of Gabbard speak highly of his regard for LGBT people. Gabbard was consistently the most anti-LGBT person in the Democratic field. She has a long history of working with her father as part of campaigns to ban marriage equality and promote deadly conversion therapy for LGBT youth. Gabbard has since said that she regrets her previous anti-LGBT work.

How much of this backlash will harm Cawthon is debatable. By his own admission in his statement, he no longer runs the FNAF empire for the money. The popularity of the series has made him worth an estimated $60 million. Much like Harry Potter author J.K. Rowling, he has likely gone beyond the point where a boycott from the LGBT people he hurts will affect him in any way. Still, it’s sad to see a property that has been fully embraced by the LGBT community tarnished by its creator’s political cruelty.
KEEP THE HOUSTON PRESS FREE... Since we started the Houston Press, it has been defined as the free, independent voice of Houston, and we'd like to keep it that way. With local media under siege, it's more important than ever for us to rally support behind funding our local journalism. You can help by participating in our "I Support" program, allowing us to keep offering readers access to our incisive coverage of local news, food and culture with no paywalls.
Make a one-time donation today for as little as $1.