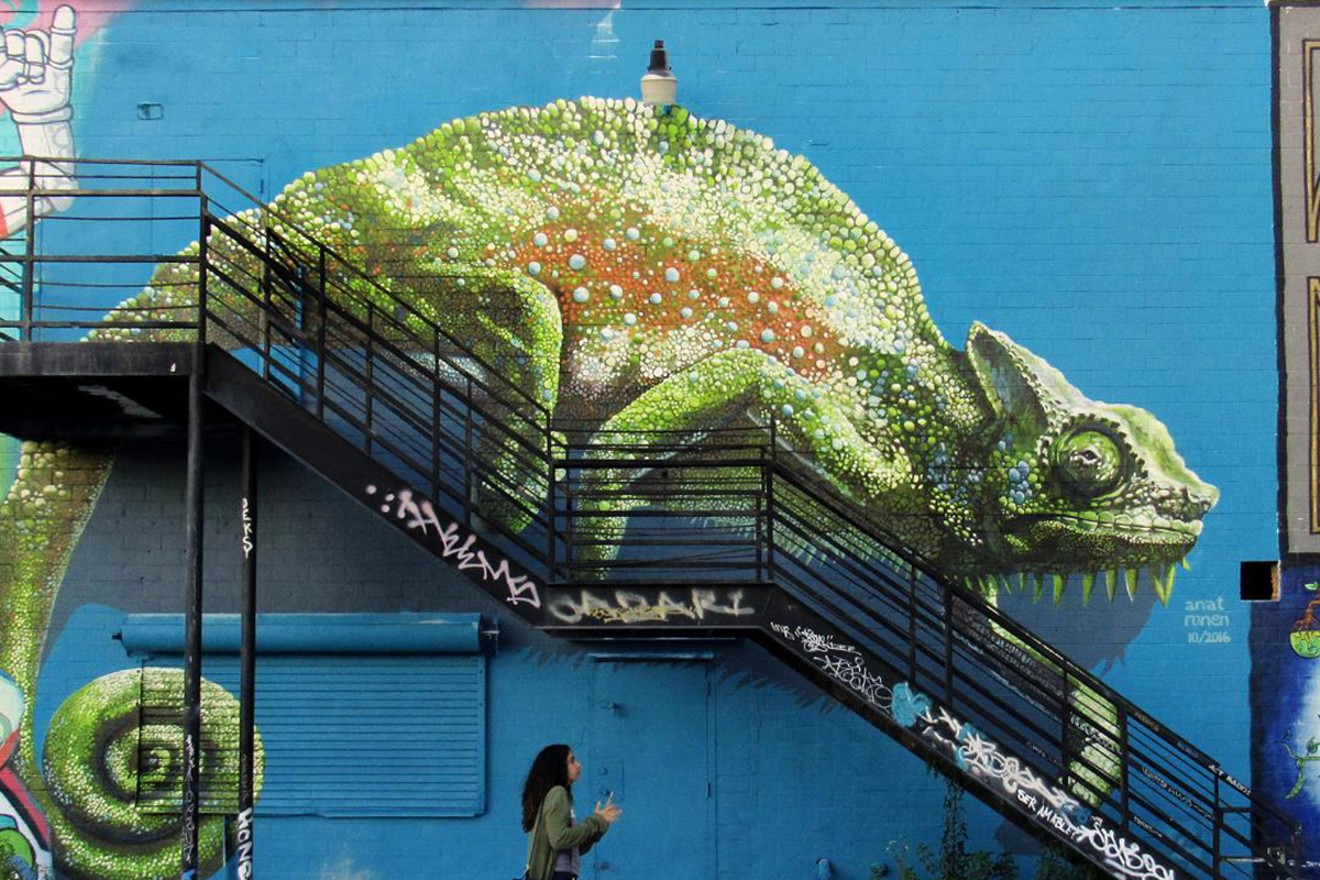 Chameleon, by Anat Ronen, from the 2016 HUE Mural Festival. Photo by Anat Ronen
Between upcoming museum exhibitions that cover everything from murals to American Sign Language and Aboriginal art, to local gallery openings and even a few out of town offerings, September is the month to get out and see what's happening on the local art scene. Dig deeper to learn how the Latin and African-American experiences, ISIS, devastating hurricanes, and 9/11 have informed art and artists.

September 29-February 16, "Jasper Johns: 100 Variations on a Theme," Museum of Fine Arts, Houston, Audrey Jones Beck Building, 5601 Main (opening day lecture September 29, 3 p.m.; Art Encounters: Community Prints activity on October 10 at 6 p.m.). In one creative burst of energy, and inspired by American Sign Language and his own hand print, Johns produced a series of 100 prints over a ten day period in his Connecticut studio. The exhibit also features works on paper from museum and private collections.

Sicilian Still Life, by Daniel Gordon, coming to Houston Center for Photography.
Photo by Daniel Gordon, courtesy of Houston Center for Photography
Emerging and established collectors have a wealth of options from which to choose with a full slate of gallery openings and events this September. Don't overlook even more exhibitions that opened over this summer; read more in the below stories. 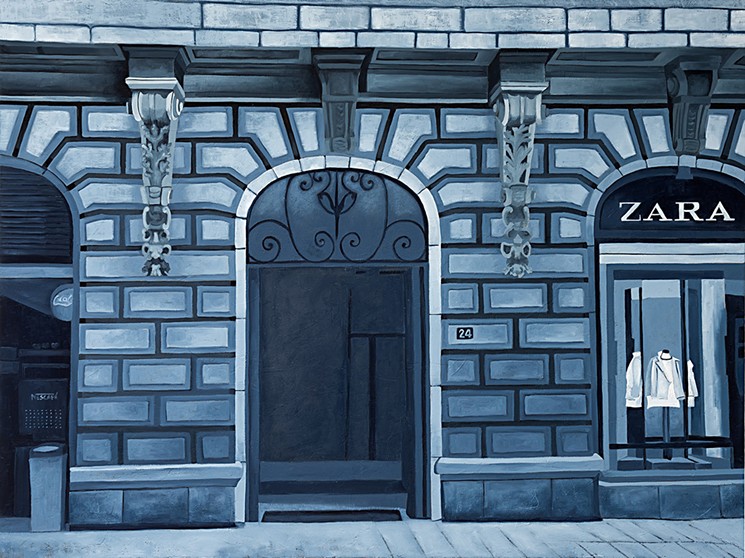 September 6-October 19, "Andrea Bianconi: Prisoner of Love," Barbara Davis Gallery, 4411 Montrose (artist reception September 6, 6-8:30 p.m. with artist performance at 7:30 p.m.). Bianconi splits his time between Italy and New York and supplements his paintings and sculpture with performance art that always makes the viewer feel something: awkwardness, freedom, wonder, or the internal search for the meaning of life.

Song of the Celestials (detail) by Robert Dampier.
Photo by Robert Dampier
September 7-October 29, Robert Dampier, "As Within, So Without," Redbud Gallery, 303 East 11th (opening reception September 7, 6-9 p.m.). Born in Houston and now living in Galveston, Dampier takes junk and obsolete objects and transforms them into art forms with new spirit and deeper meaning. In his artist statement, he says he thinks of himself as an alchemist and has found that, "when something specific is necessary — it often arrives."

Strawberry Anemone by Melissa Miller.
Photo by Melissa Miller and Moody Gallery
September 7-October 12, Melissa Miller, "Predators and Prey," Moody Gallery, 2815 Colquitt (reception for the artist September 7, 5-7 p.m.). Miller's fantastical flora and fauna are always a treat for the eyes, though there's a sense of foreboding in her new Forest Fire that contrasts with her mythological gouache from 2016, Moth.

September 13-November 10, "Learning Curve 12: Juried by Emily Peacock," Houston Center for Photography, 1441 West Alabama  (opening reception September 13, 5-8 p.m.; artist remarks at 5 p.m.). From digital to alternative processes, the work of 13 of the HCP students from the past year are showcased in this curated exhibition.

Ichikawa Ebizo X as Akushichibyoe Kagekiyo in “Kagekiyo” (detail), by Tsuruya Kokei
Photo by USC Pacific Asia Museum Collection, courtesy of Asia Society Texas Center
September 14-January 19, "Tsuruya Kokei: Modern Kabuki Prints Revised & Revisited," Asia Society Texas Center, 1370 Southmore Boulevard (opening reception September 19, 6-8 p.m.; curator talk September 21, 2-3:30 p.m.). With a modern twist on the late-18th century kabuki prints by Sharaku, the artist created bold portraits of Japan's leading actors. This will be the first time that all of his limited edition actor prints from 1984 to 1993 will be exhibited together; the show also explores issues of gender identity, a look at how kabuki has inspired pop culture, and emotionally complex self-portraits by the artist.

September 14 and by appointment, "Beyond Time," Booker-Lowe Gallery in association with Australia's oldest indigenous art gallery, Coo-ee Gallery, 4623 Feagan (4-6 p.m. Saturday). View paintings by some of the artists who helped launch the contemporary Aboriginal art movement in the 1970s, as well as works by leading and emerging artists.

September 20-December 21, "Moon Shot," Moody Center for the Arts, Rice University, 6100 Main (opening reception September 20, 6-8 p.m.). July's celebration of the 50th anniversary of the lunar landing has come and gone, but we're not tired of the subject. Drawing from the work of artists over the past half century, objects include Robert Rauschenberg’s Stoned Moon lithographs and Andy Warhol's Moonwalk. Then explore your own experimental journey through space with the VR work, To the Moon, co-created by Laurie Anderson and Hsin-Chien Huang.

September 21-December 22, Saúl Hernández-Vargas, "Nothing Left of Us in the Wilderness (No queda nada para nosotros en la espesura)," Lawndale Art Center, 4912 Main (opening reception September 20, 6-8 p.m.). Oaxacan mud and jeweler's wax become more than the sum of their parts in this interrogation of Mexico's usage of pre-Hispanic jewels to promote a homogenous and unified political identity. 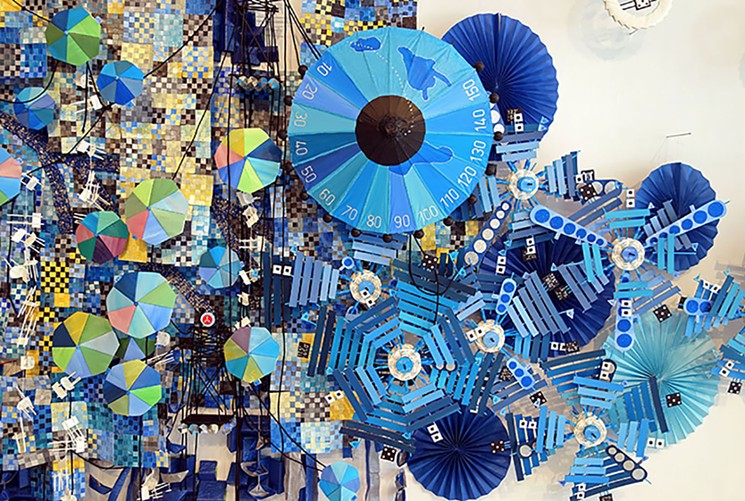 September 28-January 5, "Objects: Redux — How 50 Years Made Craft Contemporary," Houston Center for Contemporary Craft, 4848 Main (reception September 27, 5:30-8 p.m.). It's been 50 years since the Smithsonian National Collection of Fine Arts debuted "Objects: USA," putting American craft on the map, and this exhibition includes work by some of those original artists as well as contemporary makers.

Out of Town Exhibitions:

I Don't Want No Water Ma!, by Craig Odle.
Photo by Art Museum of Southeast Texas
Through November 17, "Craig Odle: Experiments and Evolution," Art Museum of Southeast Texas, 500 Main, Beaumont. Born in Houston and raised in Beaumont, this pop-surrealist painter finds inspiration in day-to-day life, resulting in acrylics that are sometimes deep and thoughtful, other times lowbrow with a riddle or pun.

September 6-November 11, "Ground Zero 360: A 9/11 Retrospective: 18 Years Later," The Arts Council, 4180 Highway 6 South, College Station (First Responder Day, September 7, 1-4 p.m.). For those who missed the exhibit when it premiered at the Holocaust Museum Houston in 2014, this celebration of the tremendous courage and dignity of a nation under fire returns to College Station.

September 21-December 1, "Prince Varughese Thomas: The Legacy of Narcissus," Art Museum of Southeast Texas, 500 Main, Beaumont (opening reception September 20, 6:30-8:30 p.m.). Thomas's immersive multimedia exhibition will fill the gallery space with new photography, video, drawings and three-dimensional installations in this intersection of social media, art and politics that address the collective narcissism found in today's culture.
KEEP THE HOUSTON PRESS FREE... Since we started the Houston Press, it has been defined as the free, independent voice of Houston, and we'd like to keep it that way. With local media under siege, it's more important than ever for us to rally support behind funding our local journalism. You can help by participating in our "I Support" program, allowing us to keep offering readers access to our incisive coverage of local news, food and culture with no paywalls.
Make a one-time donation today for as little as $1.