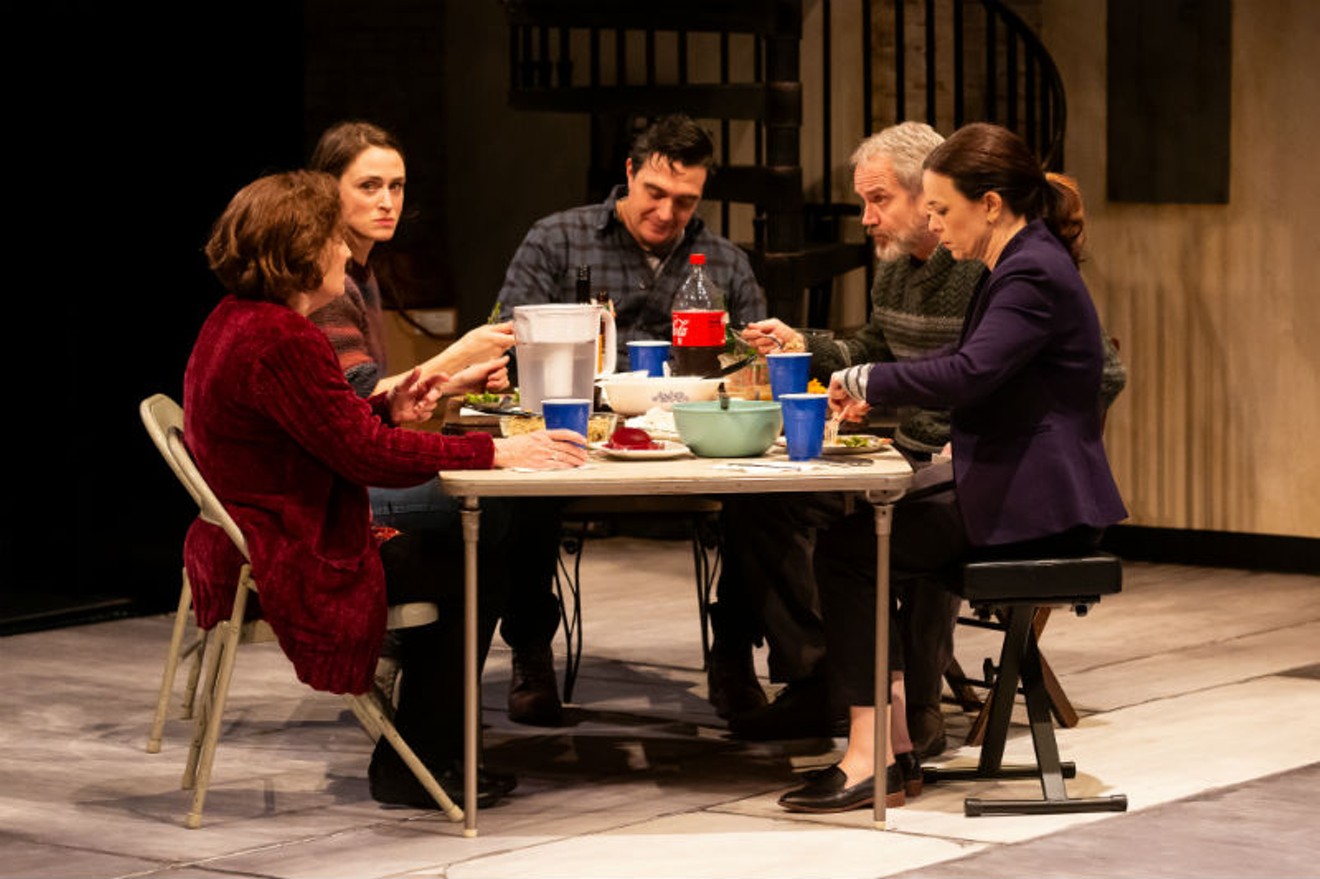 The cast of The Humans sits down to Thanksgiving dinner in the Alley Theatre production. Photo by Lynn Lane

“Cranberry sauce is the greatest lubricant,” says actor Christopher Salazar, explaining how he manages to eat a Thanksgiving meal night after night onstage while at the same time delivering his lines clearly and on cue.

Salazar is one of eight actors now performing in the Alley Theatre’s production of The Humans, and while the entire cast sits down to chow on the holiday meal as a crucial part of the plot, Salazar has a unique role when it comes to the food in the show. It’s his character, Richard, who prepares and serves the entire feast right in front of our eyes in the small kitchen on display as part of the dingy New York apartment set.

As the play progresses, we watch him chop, toss, stir, cook, reheat and plate a turkey with all the fixings, not to mention the appetizers he also serves. In the moment, we may be too absorbed by the tension building on stage to think all that deeply about how the production manages to create this meal six nights a week. But anyone who’s ever had the onerous task of making a Thanksgiving dinner will surely, at some point, wonder how on earth it’s done onstage?

Wait, fake? Did she say fake? But they prepare and eat the entire meal onstage. We watch them do it. Or at least we think we do.

Real food in a show is difficult to deal with, so Rabe looks at the script to see what might work. “There are certain things in this show in particular that we knew could be fake”, says Rabe. “They bring out dessert, but no one eats it, so that can be fake.”

However fake doesn’t mean fake looking, as anyone in the audience drooling over the dessert can attest to. “I have an awesome staff here at the Alley and one of them, Emilia Templeton, is amazing at making fake food. The chocolate croissant she made out of Crayola Air-Dry clay I want to eat”, says Rabe. 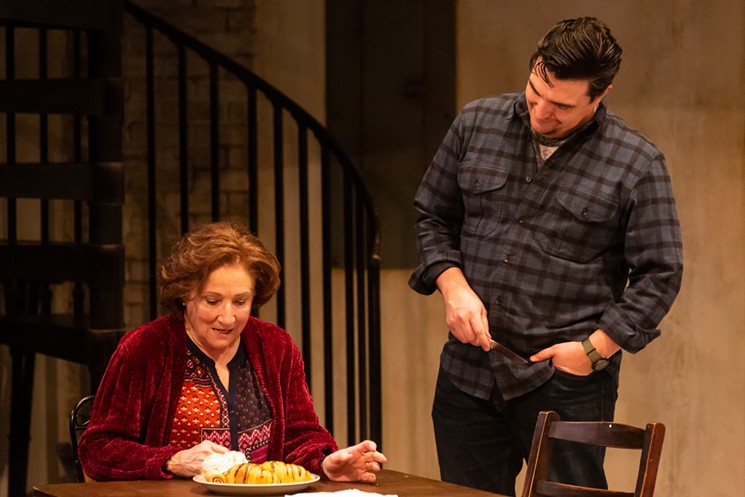 To get things looking just right, Rabe’s team often references a blog called the Fake and Bake where artisans from across the country share tips and tricks (including ice cream made of whipped wax) and there’s also a fake food cookbook that was released last year.


But that’s the easy part. It’s the real food that gives everyone the biggest challenge. Spoilage is an ongoing concern, requiring a member of the properties team to grocery shop at local stores every few days to ensure ingredients such as chard for the salad is fresh and to replenish other eaten items. However, when it comes to the difficulty of dealing with real food onstage in this show, it falls to Salazar to make it work.

Here’s his process: and bear in mind that this all takes place while he’s is interacting with the action and actors onstage in a precisely timed production.

“I pour peanuts into a bowl then place pickles and olives into a serving tray, just fishing those out is its own little challenge of meticulously skewering each pickle. Then I break down a piece of pita put out the hummus and go onto shaving/slicing a cucumber.” (The cast discussed if they wanted to leave the skin on the cucumber but ultimately felt it was too tough to eat. They also decided the characters in the show wouldn’t have access to a thin-skinned cuke, meaning Salazar is left to deal with a regular tough skin cucumber.) “So it can’t be a rough chop, I have to skin it without taking away too much. And all this is within the first four minutes of the play.”

“Then I pull out the washed rainbow chard salad, towel it off, break off the stalks and start ripping leaves in bite-size pieces. I salt and pepper the salad, dry my hands and then I have to get a champagne bottle and bring it to the group, so I grab cups run upstairs. We have our toast, I take the crudité and ranch dip (a mixture of Greek yogurt and seasoning as the actors didn’t want to be eating something that unhealthy night after night), open the container and put it on the table with the other appetizers.”

“Then back to the salad. I make a traditional vinaigrette, add shaved Parmesan and cranberries to the chard and set it aside about five minutes until I dress it. All the while checking my watch re the turkey.”

Christopher Salazar dressing the salad among the rest of the cast.
Photo by Lynn Lane
Ah, the turkey, centerpiece to every Thanksgiving meal. We see Richard take the nicely browned bird out of the oven, carve and plate the meat, but it’s all a slight of the hand trick.

“We didn’t want to cook a real turkey each night as that would be a lot,” says Rabe. "So we made a fake turkey in a pan that is two-sided. One side looks like a freshly roasted out of the oven turkey and the other side looks like a turkey carcass.” Two-sided turkey
Photo by Whitney Spencer
Part of the grocery shopping/prep duties on the show includes buying Kroger roasted chickens, pulling the meat off and putting it into another container on the carcass side of the turkey. So while to us it looks like Richard is carving the turkey, even at some point showing us the carved side, he’s actually just taking out the chicken meat slices and plating them.

Salazar, who in real life loves spending time in the kitchen, very much wanted to come in early to cook a turkey and break it down. Or make all the side dishes he serves. But actor union rules and logistics make that impossible. Instead, there’s a team who comes in two hours prior to show time to cook and prepare a number of dishes in the Alley backstage kitchen. Thanks to them, Salazar has the dishes ready to for a quick stir or adding just one ingredient before serving onstage.

The only items The Humans playwright Stephen Karam identifies in his script are the chard salad and the turkey, so the rest was up to Director Brandon Weinbrenner, the cast and the Props team. “We talked about what would be in the table, the staples we wanted,” says Salazar. “For example, green bean casserole, well, harder to consume, less healthy and difficult to prep, so we decided that plain green beans were fine.”

The final decision based on easy preparation, ease of eating and authenticity came down to green beans, stuffing and mashed sweet potatoes, all cooked by the prep team (or reheated if there are leftovers) prior to the show each night and placed in the set’s kitchen.

Most food decisions were perfect from the get-go, but some had to be altered when they proved problematic in the rehearsal process. “We switched rolls a couple of times because they were dry and made it hard for the actors to speak,” says Rabe. “So we switched to Hawaiian Rolls because they’re sweet and soft and easy to eat.”

The final food challenge in The Humans comes when the family finally sits down to eat the meal – a tough thing to do for actors who are trying to get clear lines of dialogue across. But this cast was committed to making it authentic. “We didn’t want it to look like we were heaping food on our plate and not eating it because no one does that”, says Salazar. “I’m working toward having one bite of food left on the plate, eating when others are delivering lines, trying not to spit food at my castmates. We’re all doing this. I figure everyone is at least having six to ten good mouthfuls of food a night.”

Free Thanksgiving dinner every night? Might sound like heaven to some. But Salazar insists it isn’t as delicious as it sounds. “We joked early on that we would save money by not eating before the show but it's gotten to a place for me already where I’m not enjoying the redundancy of this food.” Rabe knows the feeling. She describes another production where it was necessary to open a box of Girl Scout cookies on set, and of course there were always leftovers for the staff. “None of us could believe that we’d ever get tired of Girl Scout cookies,” says Rabe. “But close to the end of the show, we were all like, no, I can’t even look at those.”

Girl Scout cookies are one thing, they probably last forever or at least until you’re ready to have them again. But what about the perishable dishes served in The Humans? What do they do with the leftovers each eve?

“We talked about if there was some way if we could donate all the leftovers," says Rabe. “But most of the places that accept food will only take it from a commercial kitchen, which we’re not. There are certain food items we can reheat and use for two or three performances like the sweet potatoes, the chicken, the green beans, and the uneaten rolls, but a lot of the food is one-use only as the character Richard is prepping and cutting the items for all to see.” Rabe says the extra food every eve is offered to the cast and crew. We didn’t do a survey on how much is taken home, but probably very little given taste exhaustion and the fact that much of the food is purposefully quite bland. No one wants an actor reacting to aggressive seasoning onstage.

And yet as complicated and intricate as this all sounds, it’s far easier than other productions of The Humans we’ve heard about. Shows where cast members had particular food allergies or dietary restrictions, necessitating props staff to figure out how to serve a lactose-free or vegan Thanksgiving dinner.

Rabe was lucky in this sense that everything was quite manageable. “The one thing I really wanted is for the actors to be comfortable. I want them to have food that is palatable and that it fits their dietary parameters and within the actions they need to take on stage.”

For Salazar, his goal is far simpler. “I hope for those watching the show are thinking – wow they’re eating a lot of because that’s an important experience for this play.”

Here’s the entire shopping list, real and fake, the Alley Properties Department relied on for The Humans: