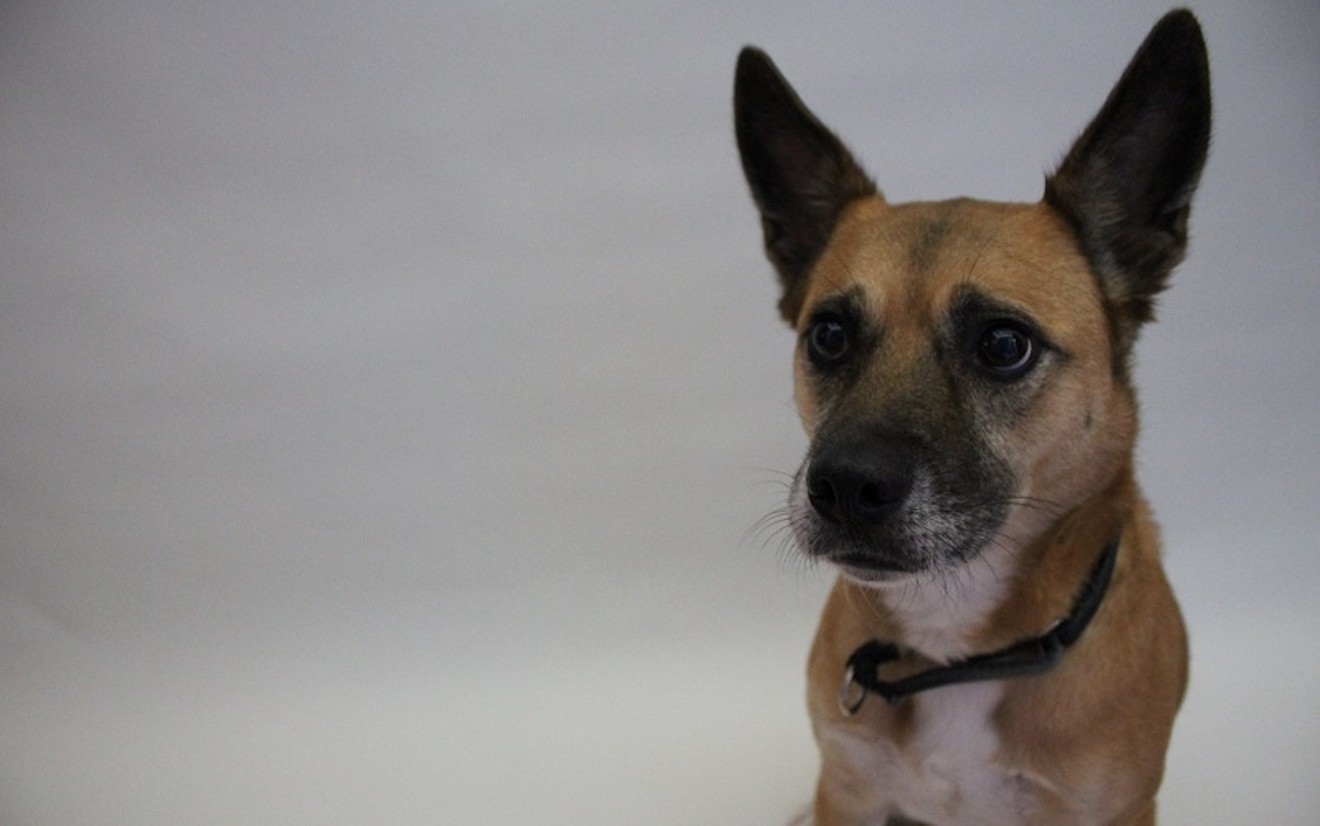 Zoe, here pictured not ironically laughing. Photo by Joe Grisaffi
I don’t know if it was the saddest funny thing or the funniest sad thing, but I saw it at local director and actor Joe Grisaffi’s house. I’d gone over there to playtest a card game he had developed for his film Dead of Knight, and I asked why his very old dog Zoe was wearing grippy socks. He said it was because she was now so old and her hips so weak, that she couldn’t stand in the kitchen without slowly sinking to her belly as her limbs splayed out like she’d fallen on a frozen pond. I looked over at her and watched as even with the socks she kept fighting gravity as if the floor was made of banana peels.

Zoe passed away last year, her final happy days made into a series of videos Grisaffi streamed online for fans and friends. Now, he’s named a comedy film festival for her.

“The Laughing Dog Comedy Film Festival was established as a tribute to Zoe, who left us in 2021,” says Grisaffi. “She had a way of bringing people together, so I am hoping this film festival is at least a small step to bringing the Houston film community back together post-pandemic.”

The festival will screen 53 short films from around the country and the world. Submissions from eight countries will be screened, 13 from Texas. Some of the highlights include Jake Balfour-Lynn’s Backseat Driver, which follows a London cab driver as he deals with kinky couples along for the ride; Texas filmmaker Michael Charron’s First Impressions which follows a weekly game night gone horribly awry; and Ann Hurd’s Mimsy the Break-Up Clown about a, well, clown that is questioning her place in the world.

Grisaffi will also be screening one of his own comedic works, Joe Returns A Video. The hilarious short film, featuring numerous Houston actors, chronicles a fictional version of Grisaffi as he realizes that he never returned a VHS copy of Steven Seagal’s Above the Law to a local video store he visited in the ‘90s. He good-naturedly walks through the neighborhood, meeting a collection of happy psychopaths and weirdoes along the way. Zoe appears in a brief scene.

The Houston film festival scene appears to be slowly recovering after the COVID pandemic halted most events. While some like ReelAbilities have remained virtual, others like Laughing Dog and the Houston Horror Film Convention have been carefully trying to get people back into actual seats.

After a long, trying time full of trauma and tragedy, a comedy film festival done in tribute to a beloved pooch sounds like the perfect chance to laugh away the sadness.

The Laughing Dog Comedy Film Festival happens through Saturday, February 26 from 11 a.m. to 8:30 p.m. at the Holiday Inn, 10609 Westpark. For more information, visit LaughingDogCFF.com. $5, free parking
KEEP THE HOUSTON PRESS FREE... Since we started the Houston Press, it has been defined as the free, independent voice of Houston, and we'd like to keep it that way. With local media under siege, it's more important than ever for us to rally support behind funding our local journalism. You can help by participating in our "I Support" program, allowing us to keep offering readers access to our incisive coverage of local news, food and culture with no paywalls.
Make a one-time donation today for as little as $1.