Siren: The Werewolf of the Sea 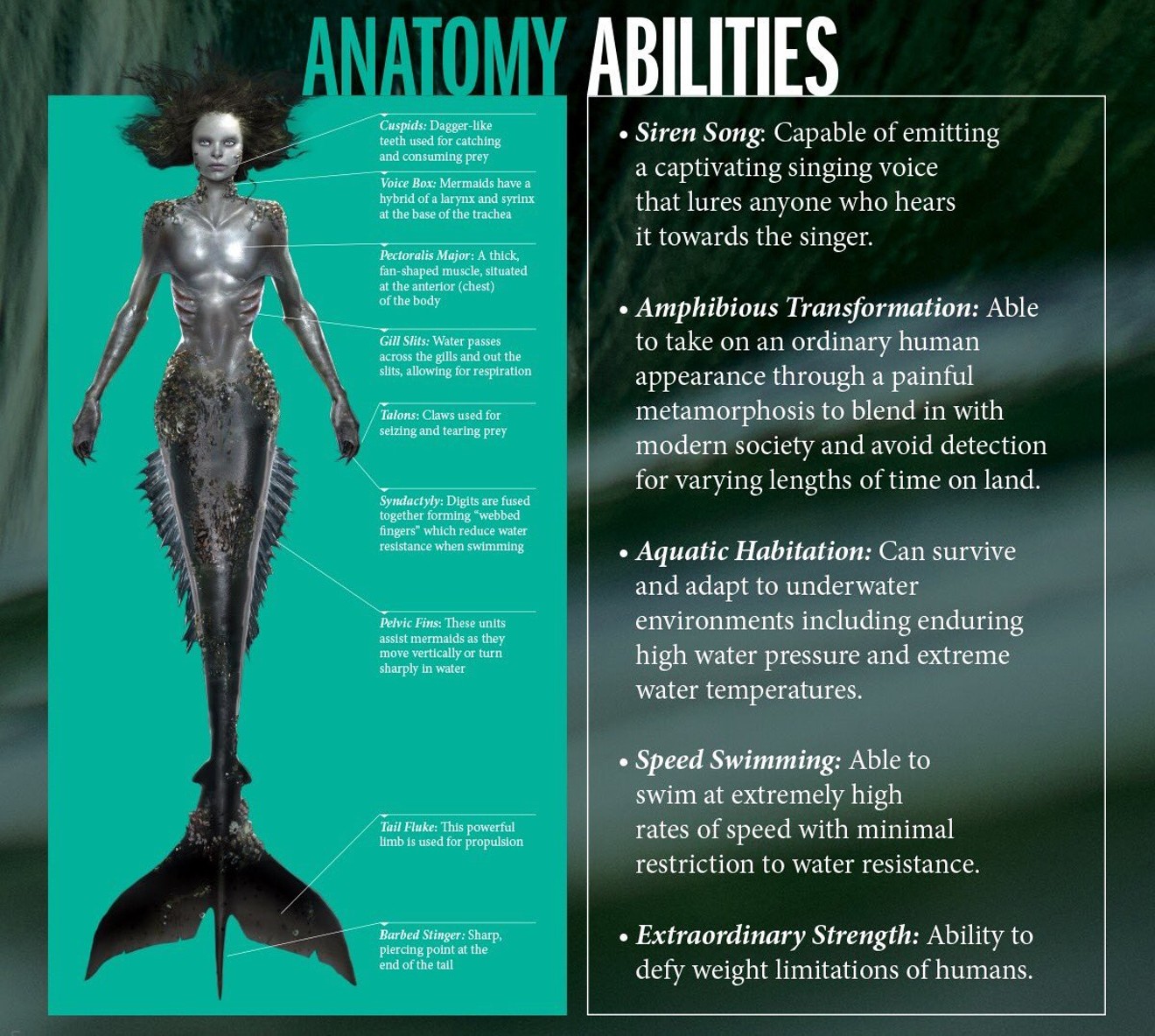 The anatomy of a Siren mermaid Official poster from Freeform
My house is a place where mermaids are constantly on display. We have mermaid prints, statues, T-shirts, you name it. My wife’s favorite fairytale is The Little Mermaid, and you can tell she means it because there’s a 20-minute rant about how Ariel sucks that goes with it (she, like me, prefers the 1975 Toei Animation version with the proper ending). Did we watch Stephen Chow’s quirky aquatic rom-com / kung fu flick The Mermaid the second it became available on Amazon? You bet your blowhole. Our daughter is the same, having started with the Barbie mermaid movies and then graduating to H20: Just Add Water. Lots of mermaids going on.

Mermaid fiction has a long-running problem, though, and that’s physiology. Nothing about mermaids and their interactions with humans has ever been even pseudo-realistic enough for a regular person’s suspension of disbelief. Magic was the best anyone could really offer most days. At least until now with Freeform’s new show Siren. Finally, we have the American Werewolf in Paris of the sea we always deserved.

If you haven’t caught Siren yet, it’s well worth the checking out. The show is an hour-long horror drama centered around a Pacific Northwestern fishing town that hosts secret military experiments involving mermaids. Eline Powell plays Ryn, a savage but intelligent mermaid hell-bent on rescuing her captured sister and who ends up in a bizarre love triangle with marine biologist couple Ben (Alex Roe) and Maddie (Fola Evans-Akingbola). Honestly, it’s the best of both the pre- and post-Twilight eras of horror romance plots.

Basic watchability aside, it’s the creature design that shines. Aside from The Shape of Water, there hasn’t been a mainstream aquatic humanoid of note in many years, and none that really used the traditional mermaid aesthetic. Ryn is distinctly ichthyoid, with piranha teeth, fish-like eyes and features, and a barbed tail that meshes sea mammal and shark/ray attributes to complete the sense of otherworldly realism. The webbing between the torso and arms as well as the flattened, nipplel-ess chest are nice, subtle touches. Why mermaids would have mammary glands in any way resembling humans has always confused me. There’s still the inexplicable full head of hair, but in the water it does at least look more like a betta’s fins.

Where Siren really shines though is the attention to detail when it comes to transforming from human on land to mermaid in the water. You see a great example in the second episode “The Lure.” When Ryn dives back into saltwater, her flesh begins to dissolve into ropey ichor between her legs. The strands twist and grasp each other in a process that looks like a cross between alchemy and a caterpillar’s metamorphosis. It’s gruesome yet beautiful.

I am hard-pressed to remember another scene like it. There have been hundreds of great werewolf transitions, a handful of memorable Jekyll and Hydes, and here and there gems like the constantly evolving Dren in Splice, but mermaids rarely get anything so visceral. In Just Add Water the switch from legs to tails was some pretty lights and a completely unexplainable sequin bra that had something to do with moon magic.

Even when not capturing the moment between woman and legend, Siren adds inspired biological moments. Following Ryn’s return to land, we see an abandoned beach. There, her tail and scales are discarded and rotting like an old snake skin after being broken through by her new legs. That’s such a small detail that instantly adds weight to the world-building. Blink and you’ll miss it, but catch it and you’ll never forget it.

There is a lot to love in Siren. The setting is beautiful, the cast plays their roles to the hilt, and it mixes horror and drama in a way that keeps the pace taut while allowing room to breathe. There it joins shows like Stranger Things and the better moments of American Horror Story when the latter remembers itself. However, what makes Siren something unique is how it gave mermaids their first true Rick Baker moments of creature effect genius. I’m definitely looking forward to more.