What Ever Happened to StarTropics?

Screencap from StarTropics
Here’s an unpopular opinion: In the classic NES era, StarTropics was a better game than The Legend of Zelda.

For those who might need a reminder, StarTropics was a first-party title released by Nintendo in 1990. It followed a boy named Mike Jones who was on a quest to find his missing scientist uncle by looking for him across various tropical islands. The gameplay was split between overworld segments where Mike navigates the island and talks to villagers, and dungeon segments where he battled monsters and solved puzzles. These days it’s mostly remembered for having one of the most frustrating puzzles in video game history (to find the code for a submarine you have to dip a letter that came in the game box in water, something it took me a call to the Nintendo Hotline as a kid to figure out).

That nonsense aside, the game is phenomenal. There’s some legitimate criticism about the awkward, jerky movements of Mike in the dungeons, but once you get the hang of it it has an almost Arkham Batman-rhythmic feel that is incredibly addicting. The monster designs are top-notch, with a wide variety of enemies requiring different skills to defeat. Unlike something like the classic Zeldas there’s also a fairly involved plot that spans across the tropics and into space. It can get a little hokey at times, but I’d argue it’s one of the most narrative-heavy games of the 8-bit era outside of Ninja Gaiden. It’s an anime-meets-Margaritaville narrative, but that’s more than Metroid got.

The game had everything. There was a heartwarming quest to rescue a lost dolphin separated from its mother. Mike investigated a haunted island graveyard and was swallowed by a whale. The massive boss fights, while Zelda-derivative, were well-designed with creatures that managed to convey tons of character even in brief appearances. Exploration was well-handled, with both the overworld and the dungeons having secret passages and hidden switches galore. Zoda the alien spacelord was a generic Big Bad, but the remaining supporting cast was well-rounded considering the limitations of the hardware.

It was also fairly critically-acclaimed. It sold enough copies to spawn one sequel and made numerous top 100 lists. This begs the question why Nintendo has utterly forgotten about it? 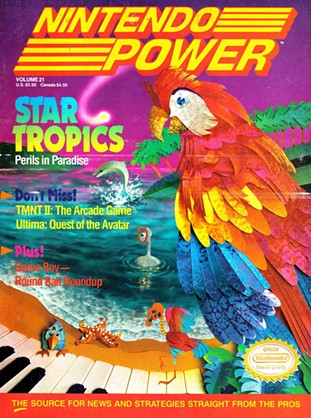 Cover of Nintendo Power #21
Remember, this is Nintendo, the company that never, ever lets a first-party title just sit idle. For Miyamoto’s sake, they put Mr. Game and Watch, the Wii Fit Trainer and the dog from Duck Hunt in Smash. Ice Climbers is still getting nods in games like Super Mario Maker. Constantly dredging their considerable library of properties is one of Nintendo’s defining characteristics.

So it seems weird that a character like Mike, who comes with a ready made arsenal doesn’t even rate an appearance in Nintendo’s fighting game. Yo-yos, baseball bats, laser guns and magic mirrors all seem like they make more sense than whatever the heck the Duck Hunt dog is doing in half of its moves.

It’s even more bizarre that StarTropics hasn’t gotten some sort of full-on updated game. If there’s anything Nintendo loves more than dusting off a property for the sales potential it’s going tropical. Mario, Link, Donkey Kong and more are constantly getting the sun-and-surf treatment in new games, but not the game that was specifically designed to appeal to that aesthetic.

StarTropics is one of the last, great Nintendo properties that hasn’t resurfaced. It may only have two games under its heading, but they are rather amazing games that consistently still show up in the various Nintendo eStores. Of all the titles I fell I love with as a kid, it’s definitely in the top ten. I don’t know what a modern StarTropics game would look like. Maybe it could be the title that brought Nintendo properly into the Monkey Island-style of adventure game. Maybe it would be another by-the-numbers action title. I don’t know.

What I do know is that the disappearance of StarTropics from the Nintendo library of ongoing titles, even in cameos, is a bit weird. I raise my coconut to it, and hope that one day in the future we’ll get a chance to set out on another adventure with Mike.
KEEP THE HOUSTON PRESS FREE... Since we started the Houston Press, it has been defined as the free, independent voice of Houston, and we'd like to keep it that way. With local media under siege, it's more important than ever for us to rally support behind funding our local journalism. You can help by participating in our "I Support" program, allowing us to keep offering readers access to our incisive coverage of local news, food and culture with no paywalls.
Make a one-time donation today for as little as $1.