The Weird Building Quirks in the River Oaks Theatre 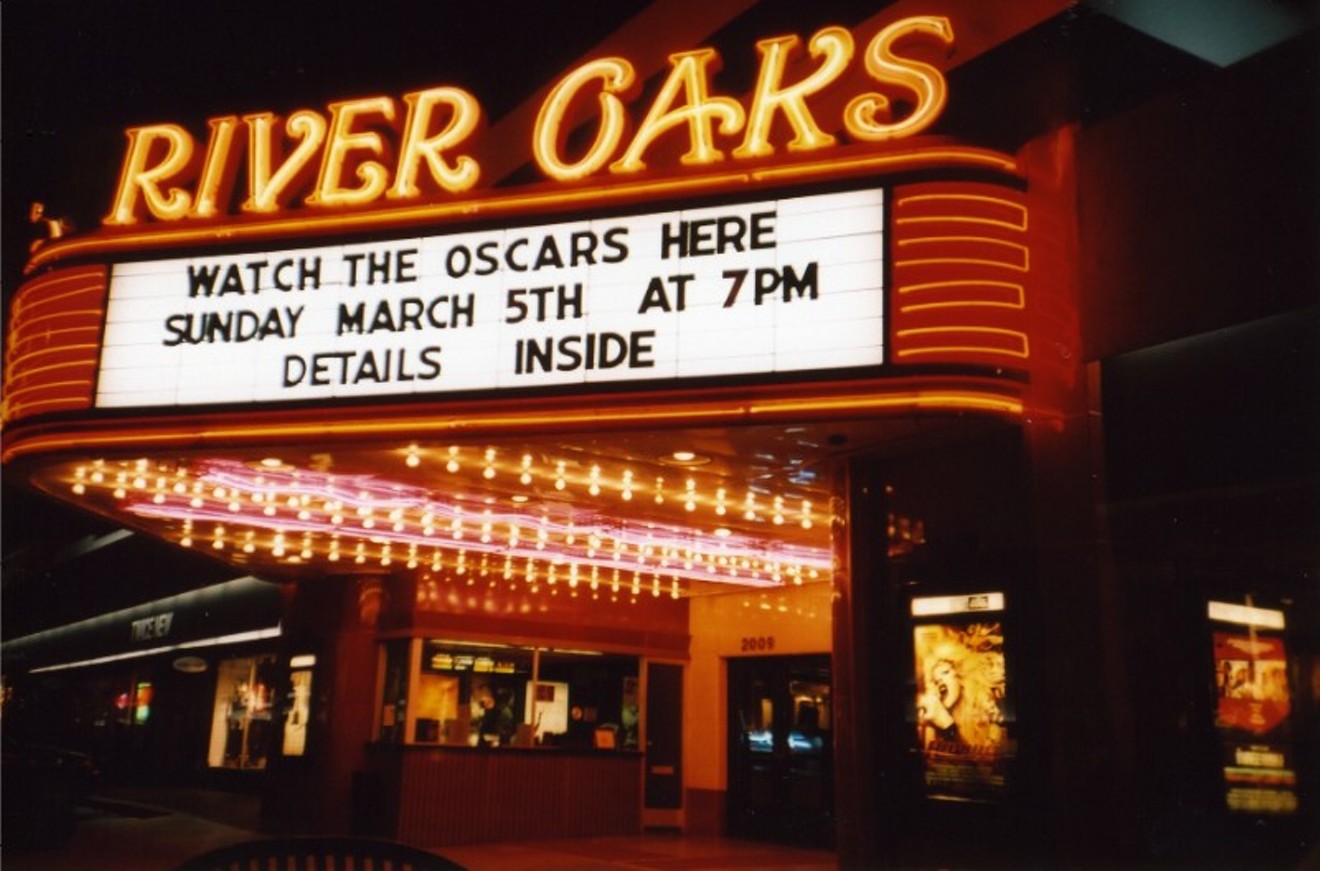 The River Oaks Theatre circa 2006 Photo by Osbornb via Flickr
The sad fact is that we may not have the River Oaks Theatre as it stands for much longer Landmark is due to be completely vacated this week, and who knows if the next tenant will preserve the space as a cinema. As Craig Hlavaty put it, maybe its next life will be as an H-E-B with the famous marquee displaying “Now Showing: Live Crawfish.” I just threw up a little in my mouth typing that sentence.

With the building itself in danger, I thought it might be fun to share some of the weirder physical parts of the theater. As someone who both worked as a projectionist and cast director for the Rocky Horror Picture Show, I have had a lot of time to crawl around in the nooks and crannies before and after hours exploring. Here’s what I found.

There actually is an elevator in the theater, but it’s almost comically archaic. It’s situated next to the handicap bathroom in the very back of the main auditorium behind an unmarked door that requires a special key to get into. The elevator is the size of a phone booth at best, and I actually had to sit on the lap of one person who had a particularly large motorized wheelchair. That was necessary because the elevator is operated by the same key, so customers aren’t allowed to go up on their own.

When I was working there, someone had decided to turn the elevator shaft into a poster gallery. Since the elevator could be stopped at any point and the safety gate opened, you could easily reach out and touch the plastered wall. I specifically remember a poster for Peter Duncan’s black comedy Children of the Revolution being one of the advertisements that you would see as the elevator slowly crawled upwards. The image of Joseph Stalin’s mustachioed love child in a furry Russian hat has stayed with me for years.

The elevator drops people off at the precarious landing between the two upstairs theaters, and I can’t tell you the number of times that I almost tumbled down the short flight of stairs carefully maneuvering wheelchairs. You had to remember to come get the patrons afterward, and it didn’t hurt to check on them once during the show to make sure that they didn’t need to go to the bathroom because remember, the handicap one was on the ground floor.

Another weird facet of the building is behind the screen. There’s a huge, cluttered storage area that mostly used to hold posters for the annual sale when I worked there. Briefly during Rocky Horror it was opened so that cast members could move from one side to the other without walking around the back of the auditorium.

High up on the west wall backstage is a small hole in a brick wall about the size of a window. I got bored one day and decided to see what was in it. Using a very rickety ladder, I crawled up there and discovered a large brick room about the size of a one-bedroom apartment. It was completely empty, featureless, lightless, cold, and the only place in the theater I ever felt was actually haunted. To this day, I have no idea what function such an inaccessible space was supposed to serve. It was just creepy as hell.

A lot of people have lamented the loss of the balcony when the building converted to smaller screens in the ‘80s. I always liked the cozy little theaters, though, and I saw my absolute favorite movie ever in one (Girl on the Bridge). Rocky Horror was briefly screened upstairs during the two weeks when River Oaks was the only place in Houston to see the Blair Witch Project and we were sold out every show for nearly a month.

Contrary to what you might think if you’ve been in those theaters, the little stage area in front of the screen was not safe to perform on and we were banned from trying under pain of falling through the ceiling to our deaths. I won’t say we strictly followed orders, but you could definitely feel the floor bend under your weight if you got up there. I can personally attest that it will hold up under the weight of two people lying on top of each other and moving vigorously for about ten minutes, but future tenants should still probably put a warning sign up just in case.

My favorite place in the River Oaks, though, is the roof. To get there, you have to crawl out of a small window in the back of the upstairs projection. If you could manage that, it gave you this wonderful view of the area. A lot of the employees enjoyed heading up there every Independence Day and New Year’s Eve to watch fireworks because it gave you an unencumbered view in every direction.

Standing up there, young and weird and poking around places you weren’t really supposed to be, put a lot of magic into being in the theater. You could feel the history in the walls, as if the old building actually wanted you to experience the decades that it had stood and served the city. Each weird discovery, every strange quirk of architecture, stripped away layers of homogenous existence. It was a place of constant exploration for me, mentally and physically, and God I am going to miss it so much even if I am now far too old to crawl around in mystery rooms.
KEEP THE HOUSTON PRESS FREE... Since we started the Houston Press, it has been defined as the free, independent voice of Houston, and we'd like to keep it that way. With local media under siege, it's more important than ever for us to rally support behind funding our local journalism. You can help by participating in our "I Support" program, allowing us to keep offering readers access to our incisive coverage of local news, food and culture with no paywalls.
Make a one-time donation today for as little as $1.